I have read many times that the above corner enclosure claims the corner. However I have never seen the correct way to protect the corner from a 3-3 invasion. The best response I have found is a ko.

, as in Agro1986's diagram immediately below. With reasonable assumptions on the surrounding configuration the defender always gets a good result, but does not necessarily kill all the invading stones. However, Ishikura seems to regard allowing a ko as an outright error. The statements I've read elsewhere are to the effect that black's configuration "secures" the corner, which leaves some wiggle room for interpretation. See the additional diagrams, below.

It would be interesting to see more about the responses suggested by unkx80 and Caern, on this page.

The above sequence kills White. However White can do better! Instead of

White can set up a ko.

So, can anyone show me how to unconditionally prevent White from living?

The problem is with Black

in your diagram. Here's the challenge: take advantage of your outside strength to play on the vital point inside.

FredK: Ishikura's continuation from this position is

followed by the placement at a, which kills

unkx80: It may also be possible to achieve unconditional kill with

Imagist: The 4-4 point is not really intended for enclosures as much as providing center and side influence while keeping the other player from taking a corner in the opening. A premature 3-3 invasion at a without support from other white stones lives, but benefits black more than white, as it strengthens black with vast influence toward the center and sides while providing little territory for white in exchange. Playing at b or c is inconsistent with black's influential strategy, which may be why this formation seen more in amateur than professional games. b and c might be good defensive points if white invades from the sides, but otherwise black should use longer extensions to the sides to leverage his influence. If black ever feels the need to enclose the corner, a play at a secures the corner more efficiently than b and c. This is what I have been told, at least.

Alex: Yeah, but you rarely see strong players use a to close the corner, because it's too single purpose and contrary to the nature of the star point stone. Usually you'll see a shimari with c or e, which doesn't prevent a corner invasion entirely, merely makes it less profitable, but has more effect on the side. If Black does decide to close the corner, it's usually with b after he already has c or e in place, or, more rarely, with d, especially if he somehow happened to get a stone a bit further away on the lower side, around the circle-marked points. You also see f sometimes when Black already has a stone around c or e and White has made an approach on the left side.

FredK: More from Ishikura, summarized. (One could imagine outside configurations where White has it easier):

A final black stone at a kills.

Black keeps some of the corner, and develops outside outside thickness. Ishikura counts this as an overall plus for Black. 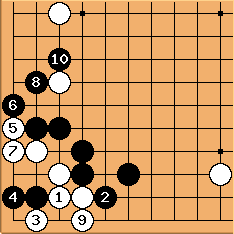 Here White has lived in the corner, but Ishikura still finds that Black's assault on White's outside position gives Black the edge, in this encounter.