Number of Possible Outcomes of a Game

MarkD: Moved from the Sandbox page.

MEIJIN TOUYA: Hey, just wondering (I can't think of anywhere else to ask this), but can you give me a number in scientific notation that expresses the number of possible outcomes of a game? I remember it's really huge, and one guy said that there was more possible outcomes than the number of molecules in the known universe. Can anyone give me a formula for this? :) Thanks

Confused: For a game there are only a few possible outcomes:

If you want to split it down further, you can give the reason why a player wins and by how much. This would probably add another few hundred possible outcomes like:

For some rules without a way to deal with superko this list may be infinite, although there's probably no practical use for that gem of knowledge.

The question how many legal positions are there is a lot harder. The absolute upper limit is 3^361 which is roughly 10^172. Quite a lot of these positions are illegal, so the real number is smaller, but finding a good estimate on how much smaller isn't trivial.

Scryer: If a sizeable fraction of these positions are legal, we could get an estimate by randomly spraying B/W/empty on a board and checking the result to see whether it's a legal position, repeating as long as we have patience for it. There's no a priori reason to think the overall proportion would be different from a random sample, is there?

Check out Maximum Number Of Live Groups for another 'ultimate' question...

John Tromp On October 13, 1999, I posted the following in a rec.games.go thread on "Number of Legal Go Positions."

my program gives the following counts:

(the C programs are available on request)

1) Partition the board in three sets B,W,E with the properties

3) A game can now be played as follows:

4) No position is ever repeated

ilan: In fact, E does not have to be connected for this to work, which is good, since I believe that it cannot be connected and satisfy the criteria of condition 1).

ALGA : There is a french article at Quebec go association web site :

He compares chess and go...

Scryer: There's a thread in rec.games.go (2003-08) about the possibility that quantum computers can sort out the whole lot, no matter how big the numbers are. I haven't studied quantum computers in general, but in my field (cryptography) they aren't magic in this way: it's expected that a suitably large quantum computer could dramatically reduce the level of effort in factoring numbers, to the point where one would need to double the size of keys to get the same level of protection... which is, of course, straightforward. I believe there's currently a project afoot that will (with considerable expense and hardware) allow the researchers to factor any 4-bit number, including 15! I think it unlikely that magic will ever be able to cut through the difficulties of brute forcing go.

Anonymous: I don't think "number of possible outcomes" has been defined yet. How about defining "final board positions".

Are there any other conditions that should be added?

Alexandre: If you can solve the problem above, then not only are you able to "solve" the game of go, you also have the best player never created, i.e. an algorithm for KamiNoItte Whatever, the number of "final board positions" is completly subjective and is almost infinite...

Ex : the master play the first stone and his opponent resign.

Almost every position may be considered final.

If you then consider the order the moves where played (same position but different games) you can multiply this number...

So what ? We are playing a game with a number of position n times greater than the number of particles in the whole universe (and n is a super very huge number )... great !

Now, let's play in order to get a number smaller : our level in kyu (or for players in dan, the number of handicap stones to the best player around)

Jacques: In the FunGoFacts page, the sentence "It is believed there are more possible game variations than atoms in the universe" leads to this discussion.

This is not only a belief but a trivial fact, even if we limit the game to less than 40 moves.

The mass of universe is equivalent to the weight of 4e78 hydrogen atoms. (Search google, and find somthing like:

http://www.sunspot.noao.edu/sunspot/pr/answerbook/universe.html) Lets assume 4e78 as an upper bound for the numer of atoms. The number of games, specially on an empty board, is well approached by permutation(361, n).

So the sentence should be:

It is a FACT that the number of atoms in the universe is smaller than the possible variations IN THE FIRST 32 MOVES of a 19x19 Go game. (If it's not 32, its very close to 32.)

ThorAvaTahr: First of all I think it is important to be precise when making this statement. The statement is very bold, and it is much stronger when it is able to withstand the obvious critisme. According to all widely accepted theories, the universe is infinite. Therefore, the correct statement limits itself to the "known" or "visible" or, perhaps even better, "observable" universe, which is that part of space that is within the

event horizon, so a sphere with diameter of about

92-94 billion lightyears. The density of particles within this space is estimated to be 10^78 protons and other ordinary particles. The number of photons is estimated at 10^88. The biggest number is the number of scalar particles that are thought to make up the dark energy: 10^118 (see

Secondly normally i would put this sentence in a context of state-space rather than game-tree. This is much easier to explain to people and a (very) rough upper limit can easily be given (3^361 or 10^172, and a Scryer pointed out above very nicely I tend to believe that the order of legal positions would be in 10^(-2) or perhaps 10^(-4) it really doesn't matter ) . Also, this way you avoid having definition problems.

Thirdly I always like to put in into context with a comparison to chess. A well known number for this is the

Here I imply that the complexity of the universe is measurable by the number of particles, which is off course not easy to defend, but it still sounds good right?

Szafir? No, it doesn't sound good. You are comparing apples and oranges. Affirming that go is far more complex than the universe is quite an aberration. The number of possible go games is in a way the number of ways to order 19x19 stones in a certain amount of turns, which is a very large number (of the order of 10^360 as stated above). For some reason you choose the complexity of the game to be that number. At the same time you chose the complexity of the universe to be the number of elementary particles. Why? If you want to be fair, you should compute the number of ways those 10^90 or so elementary particles can be ordered in space (which let's assume is 3 dimensional) in a certain amount of time. The time can be somewhat estimated to 20 billion years. I am not sure how to compute a time unit that is small enough to fit any change in the universe but you can be generous enough and set it to one second. For the purpose of the exercise, let's assume the universe is one-dimensional, because it's easier to compute permutations. So there you have it, (10^90)^(20*365*24*3600). Much larger than any number of games of any kind. And if you think of it philosophically, a part of anything cannot be more complex than its whole. A game of go, small and contained in the universe, cannot be more complex than the universe.

Pashley It goes up a bit slower if you take symmetry into account. For the first move, the possiblities are

Anonymous: Yes, bu this luxury can only be afforded to the first move, however, for the second move there are 360 possible positions, i.e.: 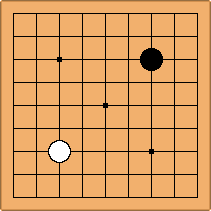 This is much different than: 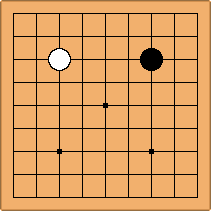 Centaur: No, if the first move was on a symmetrical point, the number of possibilities for the second move is smaller, depending on the kind of symmetry.

1 at asymmetrical point: 2 anywhere on the board = 360 possibilities

After that, depending on the moves the opponents take, there may be other symmetrical positions where the next move is essentially halved or quartered or divided by 8.

Tas: Great divide the number of possible games by a billion, or a quadrillion if you like... it doesn't matter. Anon Polya Enumeration takes symmetry into account, and can be used to calculate the exact number of distinct arrangements of a square 19x19 lattice where each point can be one of 3 colours. Using this method, it turns out that (3^361)/8 (or 2.1761+e171) is a good approximation because the method involves adding to 3^361, then dividing the total by 8, but the numbers added are only of the order 10^91.

For each board, either player could play next, so it could be argued that toggling the colours of the black and white stones does not create a new board. In that case, half the number above is a lower bound on the number of boards with 'toggle symmetry' taken into account.

In fact, for all sets of triples (number of black stones, white stones, empty points) - (b, w, e), if b <> w, the toggled pattern (or a geometric symmetry of it) must be in (w, b, e), so the number of boards of that form can be halved. The accurate figure is lower than this, but halving the number for cases where b = w will not work since not every member of (b, b, e) has a distinct toggled pattern in (b, b, e). For example

This number is therefore somewhere between