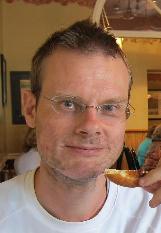 John Tromp is a researcher formerly employed by the

Centrum voor Wiskunde en Informatica. He has published papers on the Complexity of Go. His

homepage contains a list of his research and recreational interests. John Tromp's

He made the Shodan Go Bet that before 2011, no computer program running on "ordinary" hardware could beat him in a 10 game match. In late 2010, Tromp won a best of seven match by 4-0 against Many Faces of Go in games played at the London Open and broadcast on KGS. In January 2012, he lost 1-3 to Zen in a five game match on KGS with similar conditions.

In February 2016, he published the number of possible legal positions on a 19x19 board to the last digit. This had been estimated in the past, but the exact number was unknown. See the below Publications section.

Among his publications on the Complexity of Go are: