Alex: Here's a pattern that has come up several times in my games recently - first in a two-stone handicap game with a 1 kyu in the Concordia Go Tournament, then in several Internet games. I haven't yet encountered a player my level or weaker who hasn't fallen for it.

I think it will be useful for others to study, mostly to avoid making the mistakes my opponents made and avoid being pushed around by joseki bullies like me. 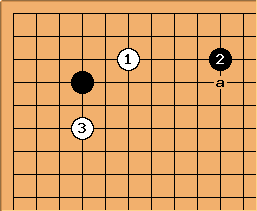 and Black, presumably with some sort of whole board thinking in mind, makes a wide pincer at

(or sometimes a). The usual response to these wide pincers is a second approach. In the tournament game, I chose the high move

mostly to make things a little more confusing for my opponent. 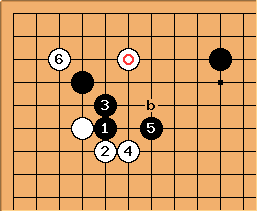 is natural. Next, White usually plays

, but because it was a handicap game, I decided to try a little bullying by stretching up at

first. Black wants to capture the marked stone, so he plays

(or b). Happy to have made that exchange, White now invades the corner with 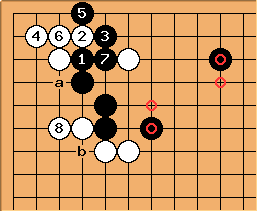 is a good move, because after the the sequence to

, White can descend at

, fixing both cuts at a and b, albeit with a couple of possible forcing moves for Black.

I've done a fair amount of thinking about this result and have my own ideas, but I'd like to give others a chance to discuss it first. This is not a total disaster for Black, but is everyone in agreement that White is better off? What is it about the sequence that should leave Black dissatisfied? How could Black have played better and how much better off would he be than White if he had? How does your evaluation of the result change if one of the marked Black stones is at the corresponding marked point instead? 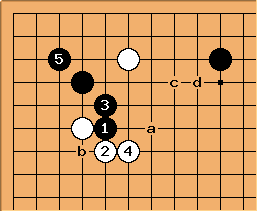 Bill: I think that the problem arises with

at a. An immediate cut at b looks good, but

on the 3-3 secures Black while leaving White with vulnerabilities. Particularly in a handicap game, I think that

is the practical play. Probably honte, too. :-)

Alex: I agree. I'd only thought about the immediate cut, but

looks even more painful for White. Good example of how calm play is often deadlier than a more direct approach. I guess White now plays at c (or does he play at d?), but the ensuing fight looks good for Black and, more importantly, it isn't clear what White has gained by playing this way.

Andy: Maybe this is why in 4-4 point, low-high double approach white does not respond to

but rather takes the 3-3 point immediately for herself.

Alex: Yes. Your opponent's good move is your good move. White cannot connect her stones, so settling one side and leaving the other light and aji-ful is best. Therefore, if White doesn't do so immediately, Black will play to prevent it.