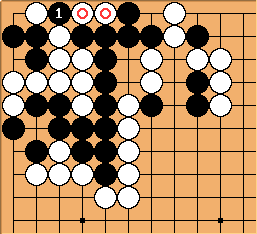 In the game, both players, Go Seigen and Fujisawa Kuranosuke misread this corner, thinking that Black should take the two 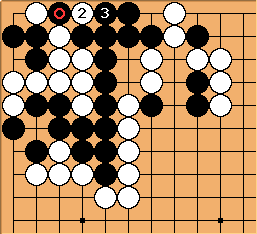 Here the commentary points out that White wins the race to capture because, "Since the corner is four moku nakade?, {there are} five liberties {for White}."

I (Bill Spight) find it interesting that, at this point White's eye shape has five points, not four. But after Black plays atari and White takes Black's four stones we have reached a four moku nakade shape, so it's equivalent. 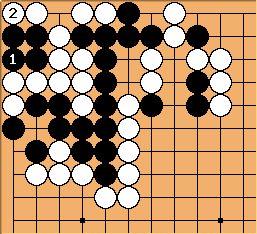 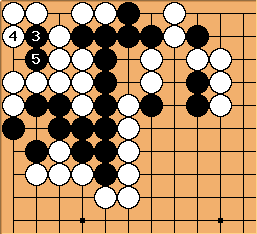 is a "beautiful play" threatening

the corner will become a one move approach ko. "White's corner shape will not become four moku nakade but two moku nakade." That makes a difference of three liberties between the two shapes.

Here the word, shape (katachi) is explicitly used. As I read it, however, four moku nakade and two moku nakade modify shape, saying what kind of shape.

Bill: Later reflections. I found this way of counting moku a bit confusing. Now I see that it makes perfect sense if it refers, not to the current eye, but to the size of the eye when the next nakade is played.