zinger: Guys, could you use the "minor edit" checkbox when updating these games - this will prevent flooding of the recent changes page. Feel free to delete this comment when you have read it.

Migeru: Sure, will do.

Migeru: Now, having done some more research on the issue... According to the how to read recent changes page, an ongoing game is "riff-raff" along with pages with keywords Humour, Online Go, and SL description, besides Homepages, Alias and /Discussion subpages. So, setting the recent changes filter to "no riff raff" will hide ongoing games, but maybe also some other stuff you're interested in. Well, then, you can hide only ongoing games by setting up your own custom filter, as explained in UserPreferences/HelpRecentChanges. But maybe it's this game that is a bother and you don't want to hide all of them. Well, then, you can add this game and this game alone to your watchlist (also explained in how to read recent changes) in "category 3" which means page is not shown in Recent Changes (highlight color would be orange) - useful if you don't want to be bothered by a certain page.

Anonymous: Unfortunately all this doesn't affect what's in the RSS feed for Recent Changes. The only way to make sure that is not polluted is to check the Minor Edit box.

Migeru: Hmmm... maybe a bug report/feature request is in order...

you might enjoy www.dragongoserver.net. Its a turn based go server in the same manner, but with a much more enjoyable interface.

Much more enjoyable to you, right? - Migeru

Migeru: Somebody solved the problem by adding the Online Go keyword to the page. 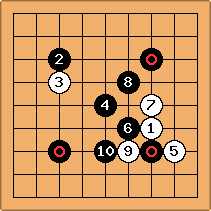 : I apologise for yelling.

: You in a good mood today? 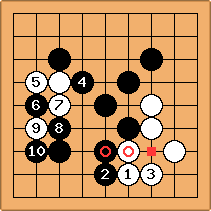 : I've got to dash, more later. Say hello to Barbara for me.

: Rg, remember to use the minor edit box for your edits.

: I will remember. So,no one's looking. You sound pissed off. Is that just me?

: I don't know whether the etiquette on ongoing games has changed around here in the (many) months I've been away, but I have never seen anyone ask people to make all their moves minor edits (which they're not). The only possible explanation is that this is a series of double digit kyu teaching games, and that people only have patience for dan-level games. There is a pecking order: it's called go rank. Bill is a very well respected deshi and a strong player, so I decided to ignore Anonymous last time, but zinger is apparently a dan-level player, so I yield. It pisses me off anyway because the recent changes page has a toggle called "no riff raff" which will hide this game, and people seem unaware of it or unwilling to use it. </rant>

zinger: I was not aware of the "no riffraff" toggle. How can I tell exactly what it will or will not hide? Also, even if I am a dan player (which is not at all clear), that doesn't make me an expert SL deshi. So feel free to correct me if I am mistaken.

: I would expect a dan player to understand compassion, discretion, and the like. The guy up top mentioned the minor edit button and then said, hey, delete the comment once read. That's okay, I'm new here. Anyway, I'll click minor edit and problem solved.

: I do not delete or edit other people's signed comments. Now, back to our regular programming: if you don't make a mistake soon I'm going to go down in flames, but I myself should probably have played my move 5 on your move 6 so it's my own damn fault.

: I have discovered two things. One: I still can't see the whole board. Two: I'm useless at counting (concentration issues!) Why did I think I would have three around you and you only two around me? Thus I learn....s l o (oh so lo) w l y.

(Eek! I forgot to click minor edit. T'would be cool if there was an option to leave it switched on.)

MrTenuki: Actually, the option you're talking about DOES exist. Just go to the "User preferences" page, go down to the "editing" section, and check "default for MinorEdit."

Migeru: Don't fret about missing the minor edit box once. 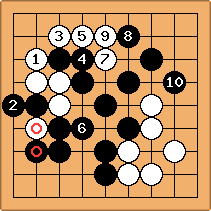 , it's good. You missed the minor edit box again.

: After three misses I should start fretting? (I sent you an email, maybe I'm imagining things...did you get it.)

: You're too modest: a new move is not a minor edit. I did get your e-mail.

: I'm sure you will. I'm trying to go a bit on instinct, see where it gets me. Hope you had a good time in Nottingham.

: good move, and a natural response to

which I now think may have been an overplay. 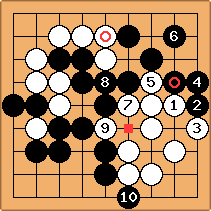 : that was a good move, too. I doubt I can win the game now.

: This ko fight is the game.

are very good, too. 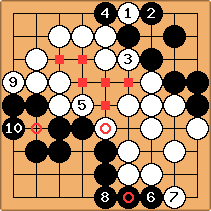 : An attempt at mutual damage.

: btw, do you know any useful resources online for Chaos Theory? I've read the wikipedia article and a couple of other things. My tech. knowledge is very limited (I have no tech. background.)

: Have I done that correctly? (Thanks for the book suggestion.)

: Plenty of those to come for me, I think.

was a subtle mistake. You gave me a run for my money though.

: So I'm about a three handicap against you? Are you okay for another game? Like I said, I enjoy them but I can imagine for you they might be boring. (I just went online to renew 10 library books. Each one had a 48p overdue charge. "The cost for renewing your library books is £4.80. Your account is £7.30" Double ouch!

: This one was a lot more fun (and more work) than the previous ones.

: I'm ready to call it quits. How much did you win by? Also, I don't know how to set up a game, otherwise I'd set up a new one.

Migeru: Not so fast: we still have to do the post-mortem. I won by 5 points. And you can't call it quits one move away from the end of the game, after all you didn't resign after 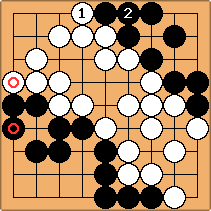 : This finishes the game - Migeru 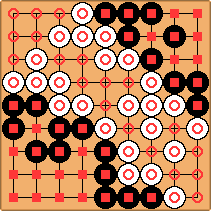 Migeru: Using area scoring, white has 43 points and black 38. Before we talk about another game I want to review this one, though, but that will have to wait until later tonight.

RG: I look forward to it.

Migeru: I just realised the situation in the upper right corner is more complicated than I gave it credit for... You apparently lost the game at

, but it seems to me that by then "the situation had developed not necessarily to black's advantage". 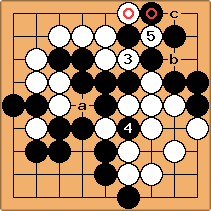 is a double atari, on the 6-stone group in the centre and on the stone between

connects the centre group (at

kills black's upper-right corner group. It's a ko, but it's worth at least 10 points and black doesn't have any threats that big anywhere else. White will play

at b unless black plays

there, in which case 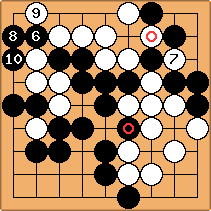 Migeru: The game is just about even at this point.

Migeru: So maybe it's

that was a "subtle mistake" like I said before. How to answer 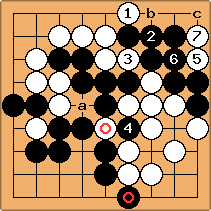 , white still has the cut at

with atari on the centre group. If black connects at

kills black. White will play at b to kill, or at c if black plays at b. 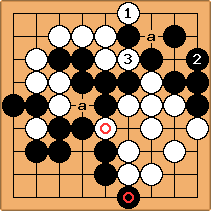 Migeru: Trying to live with

and can kill one of the two groups playing

at either of the points marked a. 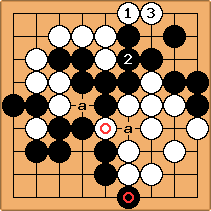 So, it seems that this is the best

. The points a are "miai to connect", so black need not be worried about that too much. However, the exchange of

-43 is slightly favourable to white, but not enough to win the game (black is ahead by at least one point, I reckon).

Migeru: So it seems

should have been at the top. In fact, the white group on the upper left is not very healthy. 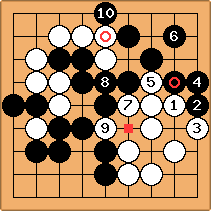 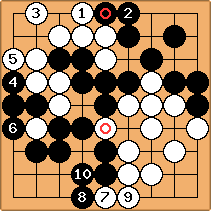 Migeru: This is a likely continuation. Black wins.

RG: (I'm halfway through your analysis. Bear with me ;)

In the part of the game around the centre, I was watching my centre stones, but I wasn't watching you coming round them on the angles...that's the way I have it in my head at the moment: You can come straight on, or at an angle, but I can't spot the angles because there are spaces between them.

RG: My move 26, where you said I could have played one higher. I didn't trust my lower group to be safe, so I was protecting it. I could see link ups across the centre, at my six, above it, and below your seven (on the 21-30 grid), and I had a ponnuki but I didn't know how to use it, so in the end it turned into a Ko and then you made your encirclement which I hadn't spotted because I thought there were many crossing lines.

(Back to the analysis.)

Okay, yes, if I'd played 40 at the top it would have sealed my weak edge. I couldn't (still can't) effectively see the relative weights of my groups, see which are stable, which are in crisis.

Thanks for the analysis, Migeru.

Migeru: I just added "the correct

", which I was meaning to do last night but forgot. I copied the diagram for moves 21-30 next to your explanation. As for my opinion on 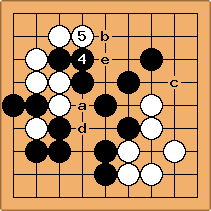 Migeru: Any of the points marked a,b,c would be a good choice for

, but d, which you actually chose, is bad because it doesn't achieve much. Playing at a not only connects your groups in the centre but it also takes one liberty away from my 4 stones on the left side. I would probably reply at b instead of at e as I did in response to

at d. I hope that makes sense. 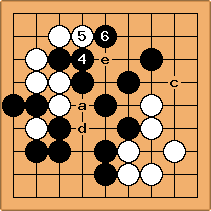 RG: Emtpy triangles are bad shape, and a, d, and e make empty triangles. Have I got that right? So If I play at b...You'd start on the right side? Your analysis is excellent, Migeru. It makes lots of sense and I appreciate the time you're taking to help me. How would you weigh

Migeru those may look like empty triangles but sooner or later you have to connect in the centre and a is the best way to do that. In addition, a takes away one of my liberties, as I have said earlier. e is very passive, it basically gives up the entire upper side. And d we've seen in the actual game. 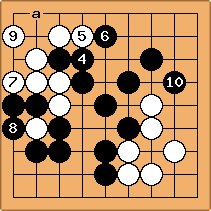 , my group on the upper right is completely boxed in and a black play at a threatens to kill it, so I must make it live. However, this gives you the initiative

RG: ...which I would use to clarify my territory in the top right hand corner with

Migeru: pretty much. I can't imagine doing better than a 5-point loss in this situation.

RE: Thanks again for the analysis. Very useful.