The following position is from a game between two wannabe shodans. 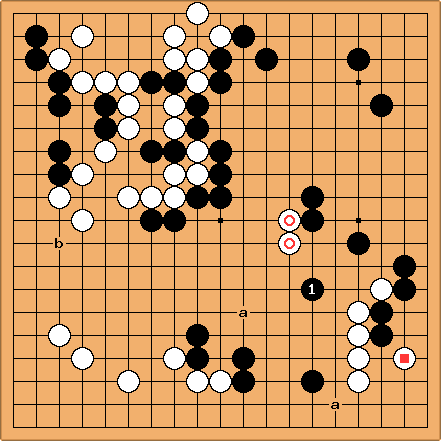 ; but it seems loose. So, does Black need to capture the

stones? On my counting of the game, Black is well ahead anyway.

Klaus: What should black play then? I would like to play at b or maybe one of the points marked a, but I am not to sure about it.[1]

Christian?: I think, my move at S4 (on the second line on the lower right side) before blacks move was a fault. I should have played a move around 1, maybe a.

was the last move before

? You were already in deep trouble.

Christian?: Sure - you mean i´m in big trouble before that move?! Than maybe my mistake was before that.

Bill: Do a count.

Later: I guess I was too cryptic. White did not appreciate the value of Black's top right quadrant before it was too late.

Let's open a page for discussion about earlier plays: /Earlier 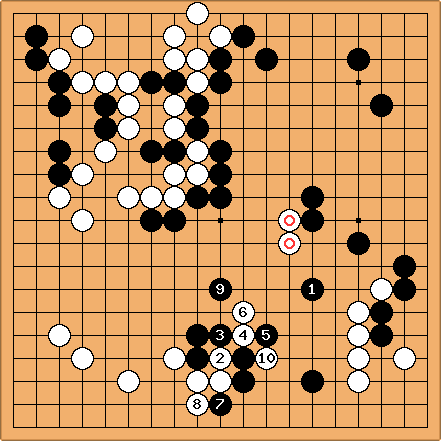 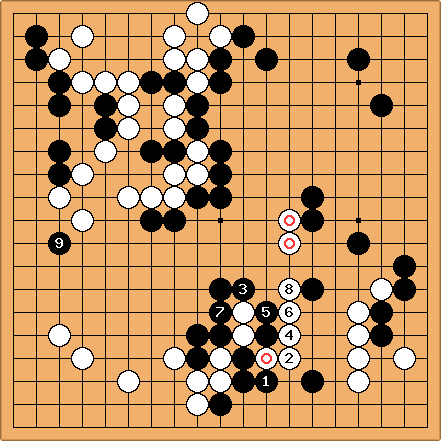 Klaus: White has almost ensured an connection to the

, but Black's lower group is safe as well. 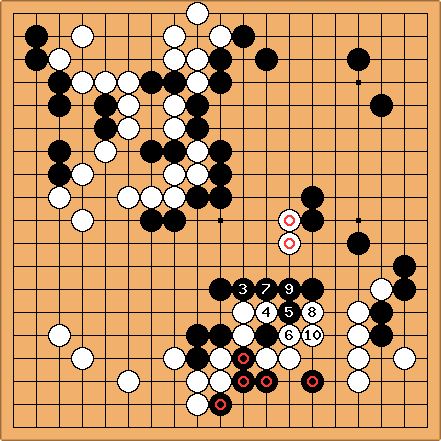 Klaus: What about this: White has sacrificed the center stones, but gained compensation on the lower side. 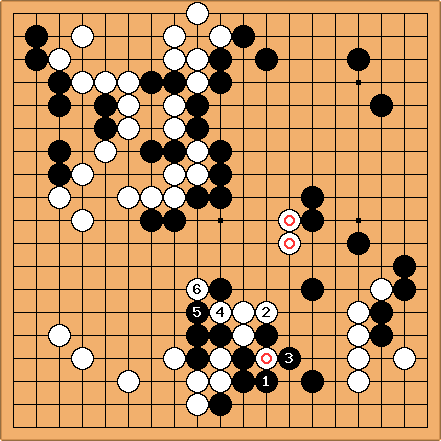 Klaus: White gains another liberty by the atari at

and uses it to push throuhg and cut. The outcome is unclear to me. 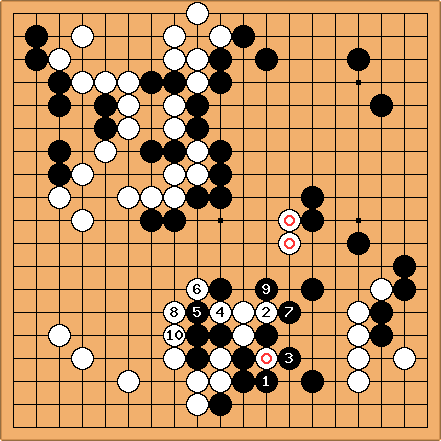 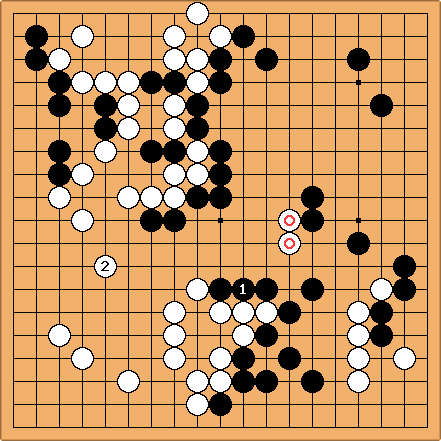 Black might sacrifice four stones and again capture the center, but

surrounds a large territory for White. Who is winning here? 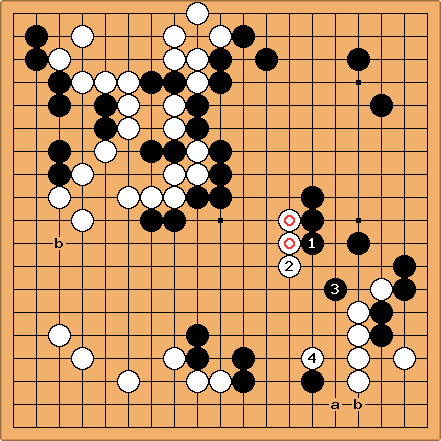 Charles What to play in the initial position?

here leaves no weak points. The problem is a play like

(motare).So, perhaps Black should think like this: Black a for White b before playing

would be a good exchange; and Black a really looks like it will be sente.

Klaus: I I had white, instead of black, I would not answer a, at b eve if a looks sente. (see next diagramm.) 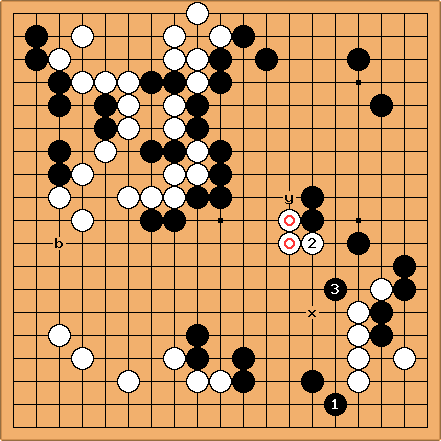 Klaus: White might connect around x and look forward to pushing at y to start the desperately needed fight. But I admit, it looks good for Black.

Charles I think White will be in big trouble if

are just unreasonable - they assume one can fight in any position at all. Klaus: Well, Charles this confidence you show, about refuting unreasonable attempts like this one, is probably an inportant reason, why you are the better Go player than me! Thanks for the comment. What about a lighter attempt to link the white stones together? 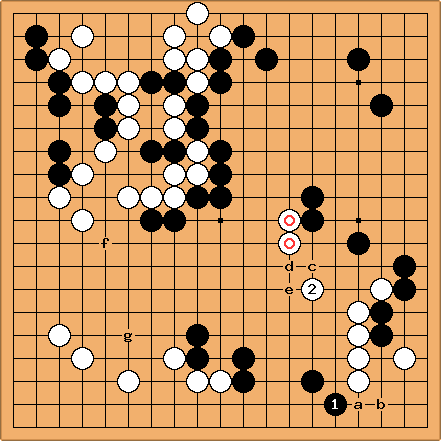 is a move that is big territory-wise, whereas

is dame. That's exactly the sort of trade Black is satisfied with, given that he is leading. Probably Bc, Wd, Be is still possible. But frankly, as Black, I just wouldn't bother, and play a big move like f or g. Since White by no means can afford a 2nd move around

, I can still try the cut later. 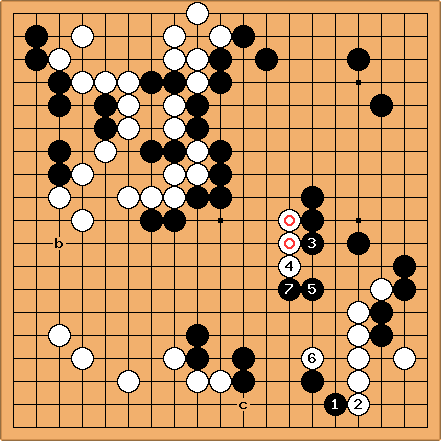 . It would then be quite tempting to play Black c, and allow White to try something in the centre. But now

here is heavy. If

then I think Black could play at

The general idea: is this a middlegame position, or an endgame position? Black is winning, so Black wants to play some tight sequence that leaves a clear result. It is White who is interested in starting a complex fight. 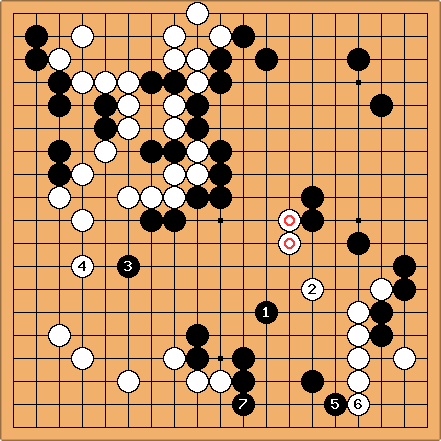 Bill: I confess I do not know where to play. However, considering the proverb that says to play urgent plays before big plays,

comes to mind. It secures Black's bottom group and threatens to cut off the

, then maybe keshi with

is thick play. While securing Black's group it looks both right and left, towards the largest unsettled areas still left on the board. 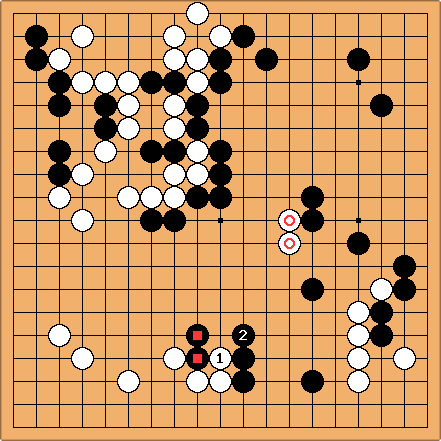 seems good here. In the overall position White cannot get enough by attacking the

stones, especially if Black makes sure of the

Bill: I agree with Charles. I think that a general lesson here is the proverb, Don't Sweat the Small Stuff. How often kyu players seem to want it all and try to save or kill everything. What is a stone or two here or there?