Lizzie is an interface to LeelaZero (LZ for short), KataGo or  in principle  any other engine supporting the the necessary features of the GTP protocol as extended for Lizzie/LZ[3]. 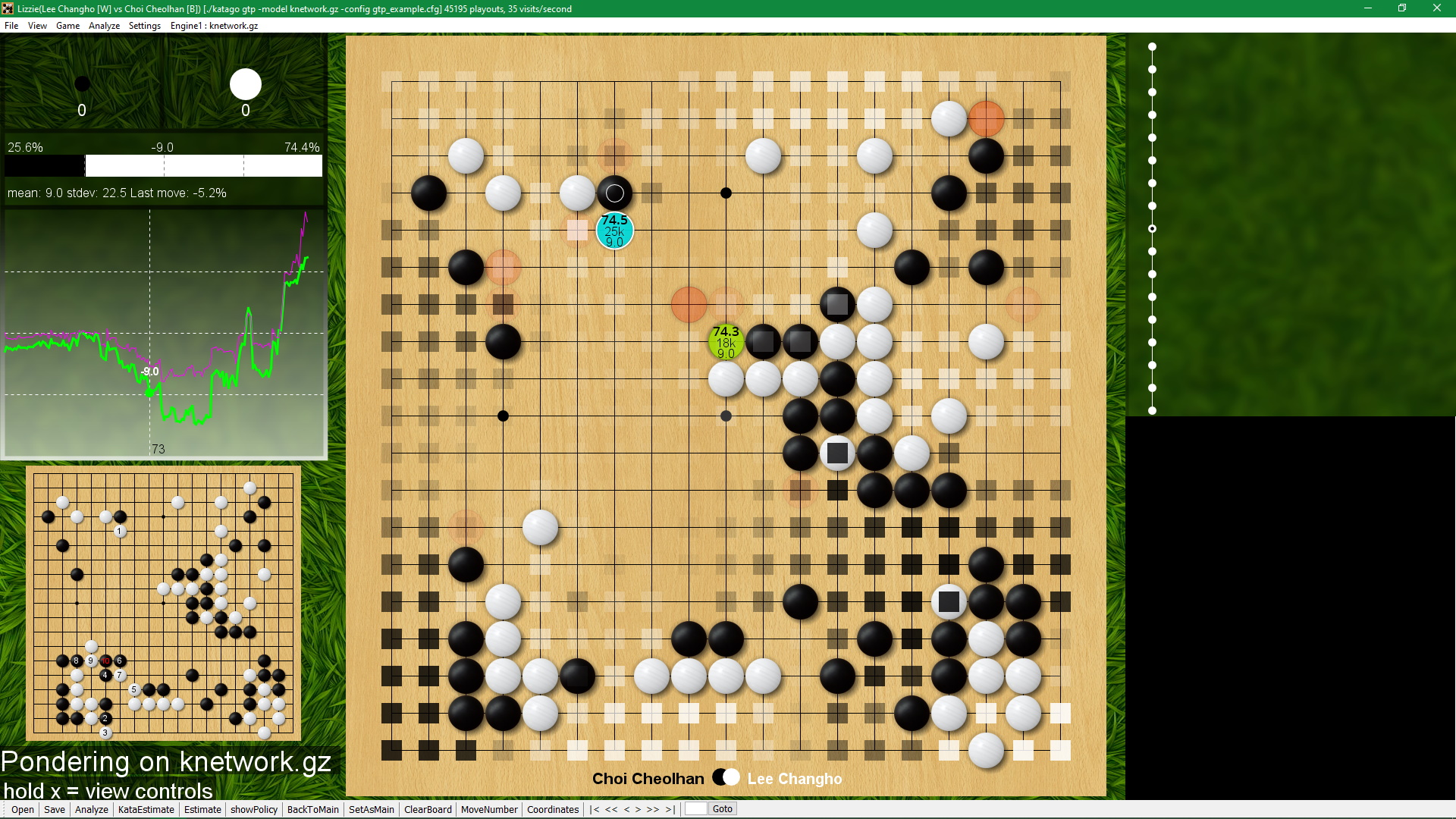 PJT: Hallo Uberdude, thanks for these videos. The second one breaks off with you starting to explain about changing networks: does that mean there is a third one due?

Looking at the source[4] reveals a few commands that are not in the help text:

The command line accepts a single optional undocumented argument specifying an SGF file to be loaded when Lizzie starts, e.g.:

To analyse a game

Both analysing and playing handicap games can give confusing results, as LZ has learnt to play level games.

When analysing it is also likely to suggest lines leading to a complicated fight which the weaker player would prefer to avoid. It sometimes also chooses or suggests plays on the first line although it is unclear if they really are worthwhile or LZ has just lost the plot.

LZ, since it aims to maximise the win rate rather than the score, may also happily suggest sacrificing substantial groups in order to be even more sure of a narrow win, where the weaker player would be much better advised to hang on to all the points they can.

PJT: Are there perhaps networks trained so as to make them more helpful to weaker players (if that is possible)?

For analysing games between very unequal players on high handicaps, the win rate is often not very useful: Black will start with a very high probability of winning (above 99% for 6 stones), and gradually lose his advantage, but this will have relatively little effect on the win rate unless and until the game becomes roughly level. At this point the win rate will plunge dramatically to about 50% and, unless Black is able to hold his own, it will continue down to near 0%. To deal with this, use the h command to show the advantage in handicap stones or (from version 0.7) use KataGo as the engine and attend to the expected score instead.

https://github.com/featurecat/lizzie/releases and follow the instructions there. It includes a copy of LeelaZero and of KataGo, and everything should run pretty much out of the box under MS Windows.

Check the article on LeelaZero for tips on installing it and setting it up: especially on Linux, you may need to install a driver for your GPU (not without risks)[2] or to install or build a CPU-only version.[2]

You may also want to use a stronger network.

[1] Pondering refers to the function that lets LeelaZero analyse positions when it is not its turn to move (PJT Hope this explanation is correct!)

[2] See LeelaZero / Patrick Traill on Linux for the sad tale of how I got the GPU running but ended up with a predominantly dysfunctional laptop battery.

[3] Lizzie uses two GTP commands, lz-analyze and lz-genmove-analyze, which are extensions of the GTP protocol, to communicate with LZ and one extension, kata-analyze, for KataGo. (The convention is to name the prefix for the particular program the extension is for.)