In game commentaries, one can read the phrase "this ko is light for Black". This means that losing the ko does not make a big difference for Black in this stage of the game, it is mostly a matter of points and not of strategic importance.

If a ko is light for both players, it means that the ko is simply small, such as a one point endgame ko. In such a context the term is seldom used. Mostly the context is one where the ko is light for one player, but heavy for the other.

A ko is heavy for a player, if he can hardly afford to lose it. It has strategic consequences, such as a submissive follow up, which is not compensated by the ko-threat and its execution. See heavy ko. For a clearly unilaterally favourable ko, we speak about a flower viewing ko.

If the ko is heavy for both players, then we speak about a game deciding ko 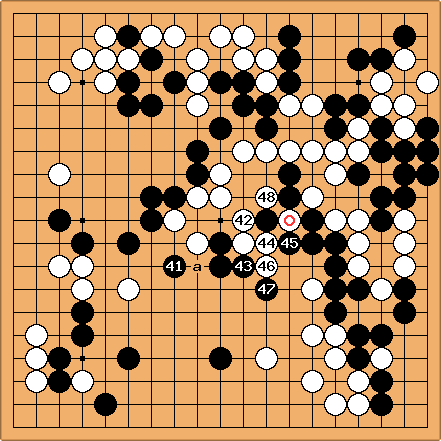 "B141 suddenly throws out a violent attack. W is in a deeper trouble. W142 is the only move to find a way to escape.

B147 To here are sure moves by both sides. It has developed to such a situation that it seems impossible for W to unconditionally escape (without paying anything, that is).

B149 connects without hesitation at

. If this move were to connect at a, saving the B149 point as a ko, then it would be a light ko for Black. Thus the situation would be simplied, and White would be almost hopeless."

From the same game, a few moves later, an example of a heavy ko. 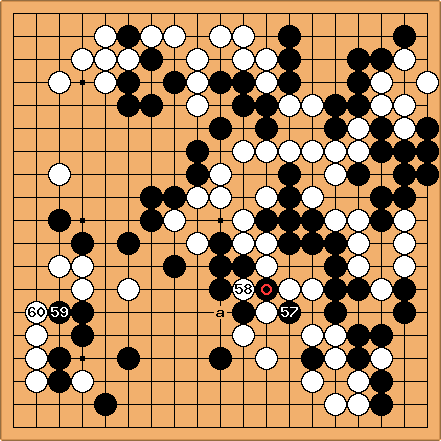 "B157: to cut this way is dangerous. Black a to connect, insisting to make a worry-free ko (flower viewing ko), is the most solid move. Now (...), this ko becomes heavy. That is, if B will lose the ko, he will have to pay." 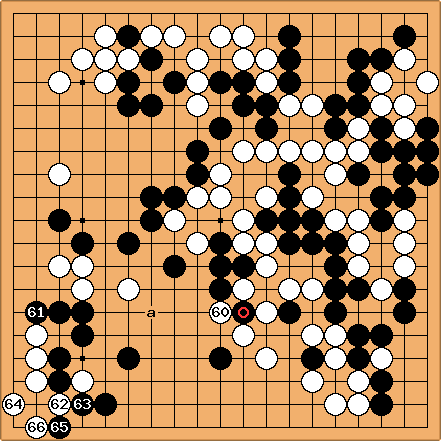 , then the bottom left lives in ko, but it is a light ko for Black, so this is not an option for White.

(and attempting to clarify something which is confusingly stated in Yu's text) The ko is light on Black, because he has the options open to cut off the four stones on the left, with a, so the life of his group is never at stake. 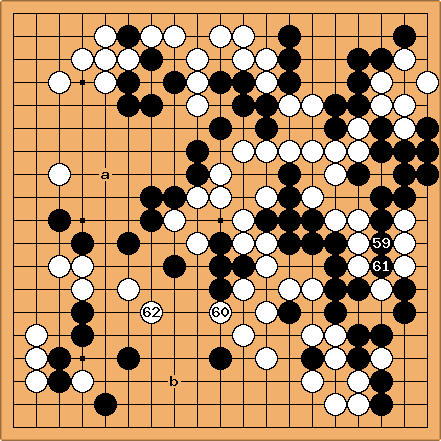 On the other hand, If Black plays B159 here, then White's capture tilts the balance of thickness into his favour. I can imagine a large scale cut & connect move at W162 which would next threaten both a and b.