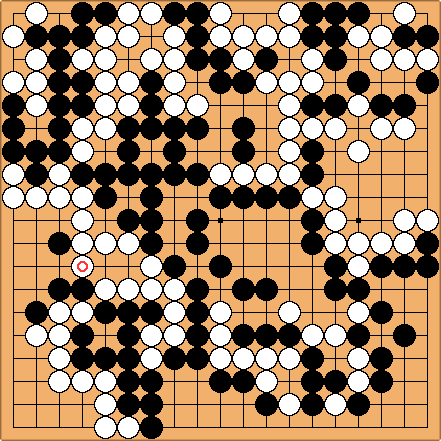 The top-left corner is a seki.

Can Black actually win the semeai in the top-right corner? It doesn't seem possible. Then White should win by 17.5, not 3.5!

Black is dead, basically because in the semeai, White has an eye and Black doesn't (MeAriMeNashi).

To count the score:

(What a pain, it is all in one lump, which makes it easy to lose count. I'll divide it artifically.)

(I hope that was comprehensible, everyone has their own way of counting.)

Thanks for the help. I must have done something wrong to get such a big difference. Have to check again. Still, I don't understand why you count 2 points for White in the top left. It's a seki isn't it? The game was played in Tokyo so I suppose Japanese rules were in use.

To answer to the original question : black cannot kill the white group in the upper right corner. It's me ari me nashi, and black has not enough outside liberties.