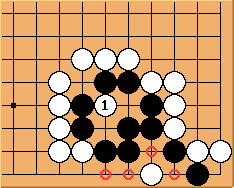 The marked space is only good for one eye with White's stone placed as it is. White must prevent Black from making two eyes immediately with a play at

, so the first move is obvious. 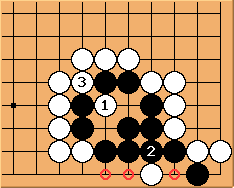 If Black tries to solidify an eye on the bottom,

is double atari and will capture and destroy an eye, leaving black dead.

should defend. If you play

as in your diagram,

can play tenuki; that is,

You mean the diagram beside this text I assume? It seems that if

makes an eye out of the space at the top, and the four in a row on bottom should make a second eye, with White unable to connect the stranded stone.

unkx80: Yes, I mean the diagram beside this text. Hint: See also my comment below. 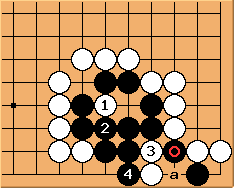 If Black tries to solidify an eye at the top,

will cut, putting the marked stone in atari. Black cannot connect at a because of shortage of liberties, and will not be able to make an eye on the bottom. 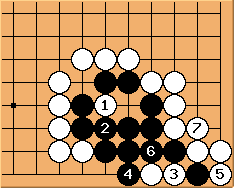 Oops. How about this way? White must be careful not to fill in at move

can be interchanged. After Black captures 2 stones... 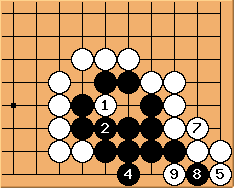 ... White recaptures and Black has no eye at the bottom. 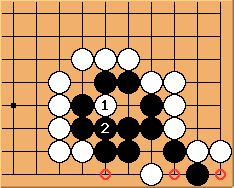 , couldn't White's next move be on any of the three marked points? 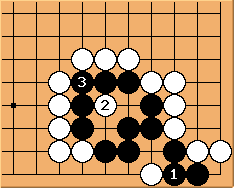 Uberdude Yes, that lives with more points so will usually be the best move to live for black. It is good that you don't just look to live, but how to live with the most profit. However, there is a downside: it gives white quite a few ko threats to kill the group so if there is the possibility of a big ko in the future it might be better to make the 2 eyes with fewer points to not give white the ko threats.