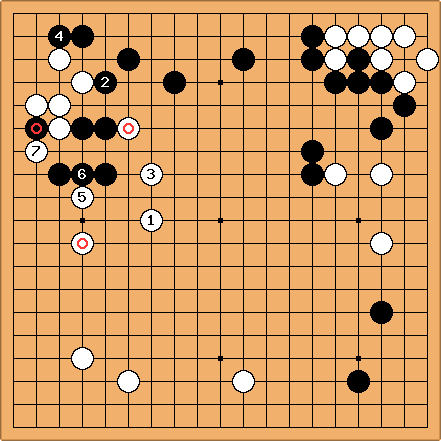 erases black's moyo. There is a disadvantage though. Black can get a good profit attacking (or bullying) the group in the corner. I think that one has to read why white allowed

in the first place. Probably because black would have the first move at the boundary of two moyos.

Honestly, when I looked through this game for the first time I thought that black was thrashed. White's group is alive, black's moyo was reduced, white's moyo expanded and white had komi. Black was in great need of sabaki. 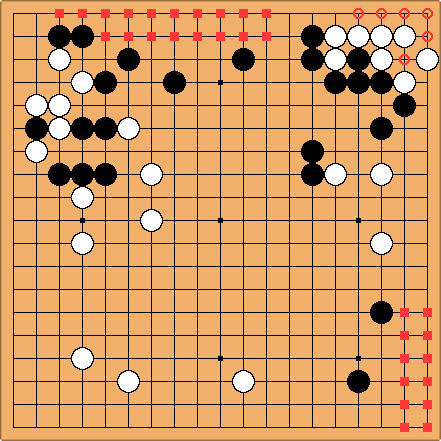 Klaus: At first sight, I had the same feeling to: black is crushed! But let's count: White:

total: 30 As black might easily get much mor points out of the upper side, White seems to need 30-45 points out of his moyo. This won't be easy, because black has sente for an invasion or reduction now.

Klaus: I am really bad at couting, but I tried my best, so please correct me if I am of the mark.

Dieter: In my opinion, stating that the White group at the right is a burden and assign a negative value to it, overlaps with evaluating the lower right as sure Black territory. If White strengthens her group, the Black corner is invadable.

Moreover, there are points in the White group at the upper left, but on the other hand I see more than 18 points in Black's top formation. All in all, I'd like to have White too.

Klaus: I understand the fist part aubout overlapping, but what about the upper left? 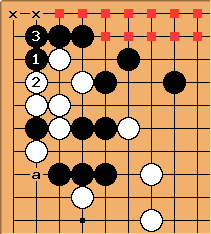 much later. Depending on what has happened below, White will probably answer at

is still moust likely to be sente!) or a. In anny case, Black will get 2 mor points at x, so white must find more than 3 points +the capture to raise the lokal tally abouth 3. It all depends on wht will habep below, but it might even be less than +3 points locally!

Dieter= Sorry, I overlooked you counted a bit for it.

Klaus: annyway, I would prever white too! Blacks arrangement is super solid, but to me it doesn't look like he is getting enough work out of his stones. However, black will probably show us amateurs how to use thickness!

are not too stable eather, so the fight will be tough! I would choose to loose on bouth sides by a large margin...

HolIgor: The most important question of the game is where the virtual black's group in the lower left would be. If black simply invades the corner, he may live in gote but white's thickness outside would be enough make a big moyo. What black would like is perhaps a long reducing dragon between the bottom and white's group in the middle. Therefore, a good option would be a kakari, but it has to be prepared yet. I think that these considerations determine the next several moves. They are a little bit strange from my weak point of view. 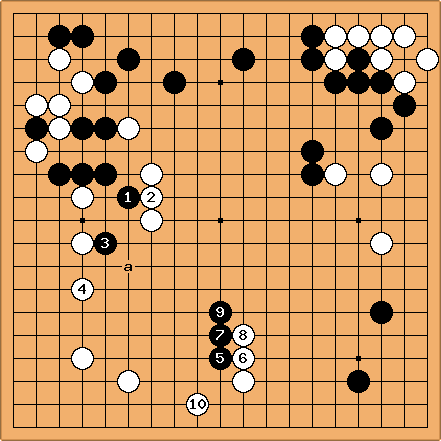 is a basic instinct, yet I think that white could have thought about letting the hole stay.

has the meaning of not only attacking some white stones, but also preparing a kakari in the lower left. That is just a feeling.

is guarding against an invasion in the corner. Two stones above are not a big deal.

HolIgor: It is fantastic how black thinks that keshi with

black will play at a and white would be in great trouble with a weak group in the center. Black's groups are not strong either, so this is already a fight. This is an unexpected transformation.