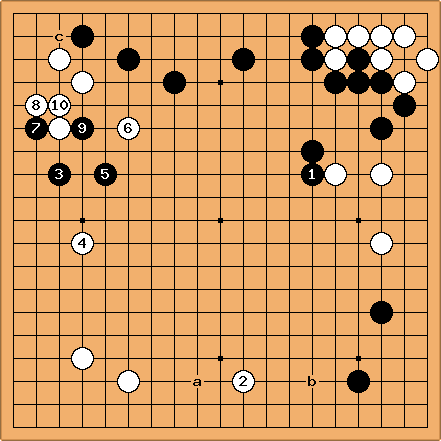 uses sente to make what I call a bent. It does not look like a bent, actually, but this happens quite often with a bent. Black is first to shield opponent's stones from the operation theater. Moves like these are huge, larger, perhaps than the oba at the bottom and on the right.

is a little bit farther from own stones than usual but this is explainable. In case of invasion somewhere near a white has a good extension at b. From the general point of view this direction is more valuable than the right side because it expands and takes away from the opponent at the same time.

is the attack we waited for. Black has to start to use his influence.

is strange for me. If this was not the strongest player in the world but some 5k player I would comment with authority that the correct answer to

is c. They were miai, weren't they? On the other hand, I would have a problem to deal with the double wing formation from the bottom left corner. White bets on fast development hoping to handle the threats to the group in the upper left corner in a fight.

Dieter: I'd say they are miai when Black already has a stone around 4 or is strong in the area in some other way. Now his pincer can be attacked, which is what White does. I guess White c would be too passive.

is kind of natural tobi and

is thin. A niken tobi is to sacrifice by the proverb. White could yet play at c but black's influence on the top would become too much.

is a tesuji (I suppose) that I don't understand. I'd appreciate if some of the stronger players enlighten me. Why did he play 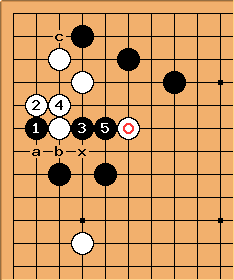 is a useful forcing move. If white answers as in the game, playing at b might be a nice shape move later, to save an eye at a or x. On the other hand, a might be an endgame move, much later naturally. 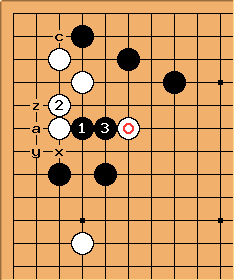 as well. A later move at a may be answered at x, y or even be ignored at all. z would be submissive in most cases. As it stands, black does not even have halve an eye secured.

is a shape move. I have written about the value of such moves. The main idea is to avoid creating weaknesses. 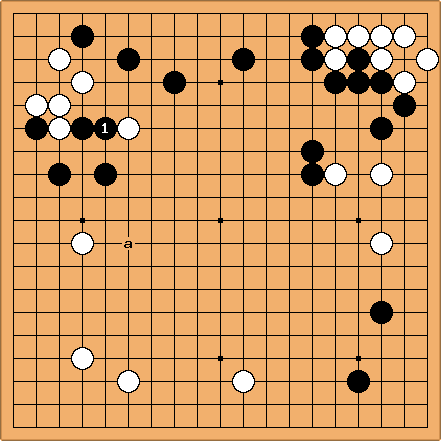 HolIgor: Things look not bad for black after

HolIgor: I think I fill finish fuseki part at this point. One has to perform the analysis of the position. Black has an ogeima shimari in the lower right corner and quite a big thick top. White has a two wing formation in the lower left quarter of the board, a living 7 point group in the top right corner, a small living group in the top left corner and a weak group at the right side. White's worry is that the two wing formation is yet very thin, the group on the right has to be settled without much losses and the top black's moyo has to be reduced. Black's worry is to find a way to squeeze some profit from the group on the right, to reduce white's moyo formed by the two wing formation, to expand the moyo at the top.

Applying one of the major principles we see that the most important moves are at the lines where the moyos meet, aren't they?

Klaus:Which induces the idea of a, safeguarding the thinness while approaching the black moyo. I wonder what was played instead... :)

HolIgor: Of course, I knew where Yi Ch'ang-ho played, so my thoughts may be considered as convincing myself. I wonder how would the game go it the solid move at a was played.