The most orthodox play here may be Black at a (Kobayashi fuseki), but this way for Black has also been common.

Top players have tried this black formation, too. Ideas for White from pro games are: at a, which meets with the taisha or one-space pincer; at b; or an interesting wedge variant at c (wedge - when the approach to 3-5 is possible, perhaps an idea of Yoda Norimoto).

Since this way of playing out a side with a white 3-3 point also gets a stone on the 10-4 point, it will be very like the Kobayashi pattern if White approaches the upper right corner. White's common next play is at a, as one would therefore expect.

These plays by Black would have a similar meaning, but because of the invasion point at b,

is a little bit heavy.

This very secure pattern has been played by pros as well. 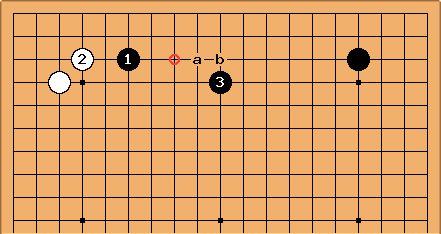 This is also a pattern seen in pro games (played in 1990 by Yu Bin). O Rissei has tried it with

at a, and at b. In this case the invasion at the marked point is more of a worry for Black, because