Ja-Choong-Soo (자충수 Revised Romanization: Ja-Chung-Su, McCune-Reischauer: Cha-Ch'ung-Su) is a Korean go term. It literally means "self filling up move", which we can polish as "a move that reduces one's own liberties".

See Minue's HaengMa Tutorial For Beginners for a definition at length.

is a really stupid ja-choong-soo (except maybe as a losing ko threat), because it destroys the seki. 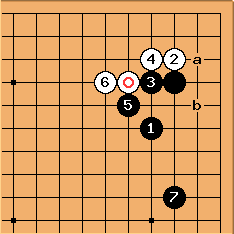 The beginning of the discussion starts with this joseki mistake. Typically, after

, black will hane at a, white extends with

, and black will play at b to make good shape. However in this example, black makes a mistake and plays

. This is an example of ja-choong-soo, a self filling up move.

The point is that one expects a net growth of liberties for each move: