Correct evaluation of local positions is indispensable for good and reasonable plays in local fights. Both of them are closely related, like two sides of the same coin. In fact, many of beginners' absurd mistakes in local fights result from their inability to see and grasp their (or their stones') situation correctly, not from their poor reading ability.

For example, many beginner players on KGS simply ignore and play tenuki against an attachment on their stone. Generally, attachment moves create "urgent positions". The basic reason is that, the attachment threatens your stone severely, directly reducing its liberties. However, if you don't see the situation correctly, and don't know that an enemy stone's attachment directly threatens your stone, you will see a big advantage in playing elsewhere. Moreover, you will repeat this kind of mistakes over and over again for a long time.

As a brief aside, this mistake of playing tenuki after an opponent's attachment play seems to be a peculiar characteristic of KGS beginner players who use to play lots of their practice games against "GNU Go". It seems to me that they assume this bad habit from "GNU Go".

Anyway, in this chapter, I will explain several Padook concepts which we should know in order to evaluate and understand what's going on in various local positions. Starting from simple hypothetical cases, I will introduce the most basic principles of positional judgement.

Not much things to say on this. Assuming that all the other relevant factors are equal, as you invest more stones, you get a better local position in that area and your stones get stronger.

In the upper left corner, a black and a white stone are confronting each other. This position is even for both, presently. But in the lower right corner, there are 2 black stones and 1 white stone. The ratio of stones is 2:1. It is easy to see that black has a better position than white. 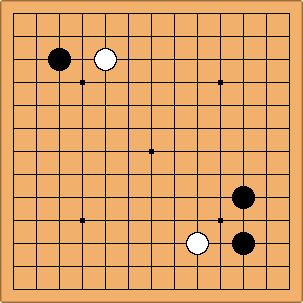 The relative ratio of stones is also worth considering.

So the best way for Black to take advantage of 9 handicap stones is to attack and put pressure on the white stones aggressively in the early stages of the game.

Liberties are a stone's "roads to breath" (by the way, this is the literal meaning of the Korean term). 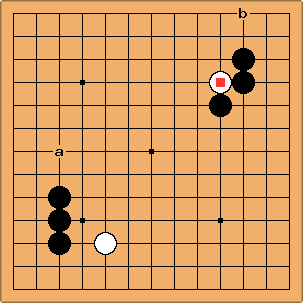 I've already mentioned the importance of liberties several times. In the lower left corner (position a), Black has 8 liberties, but White just 4. Obviously, this is a good local position for Black ...

The upper right position (position b) is even better for Black. Black is hurting the marked white stone much more severely. Having the importance of liberties in mind, let's consider this more realistic position: 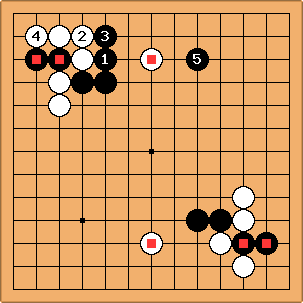 Black wants to neutralize the marked white stone, and is willing to sacrifice two stones. The simplest way to do this is shown in the upper left corner. In this sequence, Black has invested 3 moves (

) to restrain White. Notice that unfortunately, even after these 3 moves, the single white stone still has 4 liberties (i. e. the maximum liberty count for one stone). Black feels somewhat uneasy about this result. 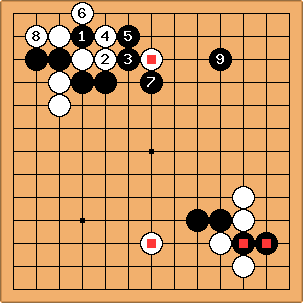 In this revised way, the marked white stone is seriously suffering from lack of liberties. It has lost most of its power, becoming a garbage stone. Black has got a much more comfortable position thereby. See driving tesuji. 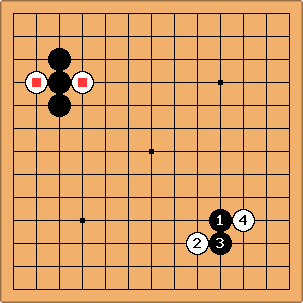 In the lower right corner sequence we see a ripped keima, where Black and White each invested the same number of stones (2 stones respectively). When we consider only the number of stones, this position seems equal for both. But as you can probably see, in this simple local fight, White already is affected by huge, fatal, and decisive damage (at least about the value of 1 handi, probably more than that).

What about liberties? White's total number of liberties is 6, and Black's 2 stone group has 4 liberties. White has more liberties than Black, although each white stone has fewer liberties compared to the black group.

Thus, in terms of "the total of liberties", this position is again, not bad for White.

If so, what makes this position so bad and disasterous to White?

The 2 black stones are connected, sharing their liberties with each other. This means that, whenever

also gets stronger, because the additional "breath" can pass from one stone to the other through the solid connection. In other words,

cooperate for increasing liberties. On the contrary, the two single white stones cannot cooperate this way. For example, even if

increases its liberties, this can not affect

's liberties nor provide any instant help to it. As a result, it's much more difficult to White to take care of its stones, being split up badly, than it is to Black. Black's stones are in a much stronger position. This tough situation for the survival of White's stones will be transformed into a loss of territory inevitably.

In the upper left corner, there is a basic "shape of split stones". You can safely regard White's damage as worth about the value of 2 handi (20~25 points). The marked white stones are rotten and spoiled, smelling nastily.

Mind you, without extremely strong and very good reasons (huge compensation for this damage), NEVER allow your stones to be separated like here.

Whenever you see this position, you actually should feel disgusted by White's rotten stones.

4-1. Strength of stones and efficiency in Go

Go is a competitive game for 2 players. Playing alternatingly, both of them try to maximize the effect (functions) of their own stones. When we succeed to take a bigger advantage of a given number of stones than our opponent, this difference eventually becomes evident in the form of more territory in the last stage of the game. As I said earlier (somewhat oversimplifying), Go is not a game of territory, but of survival of stones. Thus, moves which are played to build territory only, without applying any effective threat (pressure) to the stability of the opponent's groups nor defending our own weak and vulnerable ones, are likely to be trivial and small in their value.

If we neglect the strength of each side's stones, this will decrease and hurt the efficiency of our stones, and lead to a corresponding "loss of territory" at the end. Simply speaking, such an attitude results in small and inefficient play.

Let's see how this actually turns into a loss of territory: 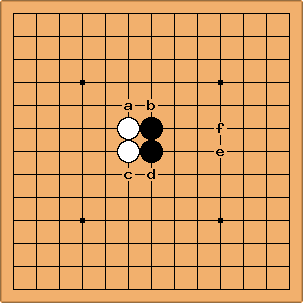 In this local position, black and white stones touch and take away liberties from each other, and both of them have just 4 liberties with no base or eye shape. All of this (no base, no eye shape, close distance between black and white stones, few liberties) strongly indicates that this is is an urgent situation. Both sides are putting pressure on the stability of the other side's stones and are threatened by them, at the same time.

For Black, a (hane at the head of 2 white stones) and b (simple connection move) are reasonable moves. They ensure their own stability, putting pressure on White. Of course, black c or black d are also considerable, on the same reasons.

What about black e or f? Sadly, neither e nor f can be called reasonable in this case. Although these moves allow fast development to the right side, they ignore the urgent point of this position, in terms of "strength of stones". Hence, they will necessarily cause Black's stones to become inefficient. e and f are typical examples of moves that are played with "mere territory" in mind, not considering the "strength of stones". They are small and idle.

Looking at the resulting positions from a perspective of strength, this is easy to understand: 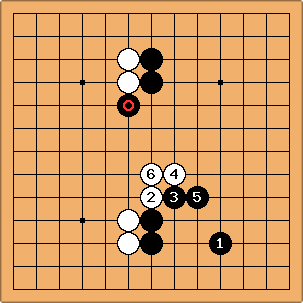 Here, the circled black stone weakens the adjacent white stones significantly by reducing their liberties directly, and thereby, it strengthens the 2 black stones indirectly. On the contrary, a "too keen on territory" move like

allows White to get considerable control (influence) of the center area with all its depth, whilst Black must accept to become ineffciently cramped. 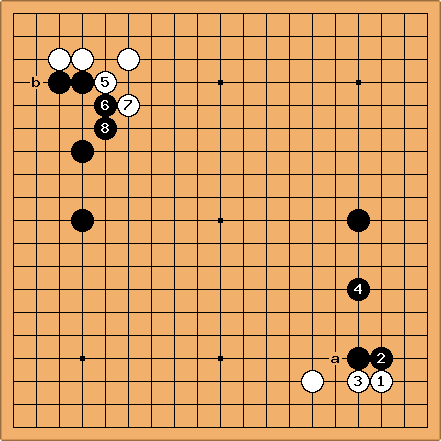 In diagram 4-4-3, there are no problems with moves 1 to 3. All of them are ok. But suddenly, it seems that Black wanted to secure its right side, and played

. Unfortunately, that's a big mistake. You may ask, what's wrong with this

, doesn't it even harmonize nicely with the other stones? Well, that is secondary here.

is missing the urgent point in the lower right corner.

a is the key point for both in this position. White, by playing there instead, can weaken the touched 2 black stones significantly. Suffering from lack of liberties, Black has no choice but to give in. As shown in the upper left corner, Black ends up in a cramped, over-concentrated local position, allowing White to get strong influence towards the upper side. Even worse, Black is still vulnerable: White can exploit Black's lack of liberties in sente with b, at yose time. 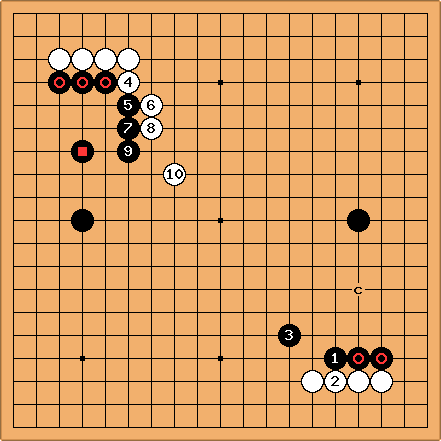 In the lower right, Black plays a solid extension first, to increase the liberties of its 2 marked stones, and reveals the weakness of White's thinly connected stones. A solid connection by

is another (locally) vital move for supporting the three black stones. It enlarges their potential of development and simultaneously keeps White down, reducing any further white expansion to the bottom side.

But, what if Black secures its right side by playing at c instead of

? Is this still a bad idea? Sure. It is too early to play that move.

In the upper left corner we can see the expected sequence after the marked black stone with square was played. White plays

instantly and happily, pushing down the head of Black's 3 stones (marked with circles) and consequently, forces them to get bent backwards in an awkward way. And obviously, this is not what Black wants to achieve. 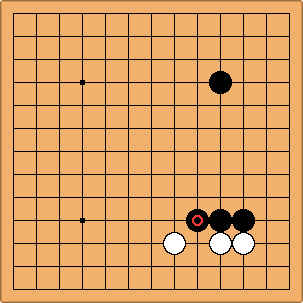 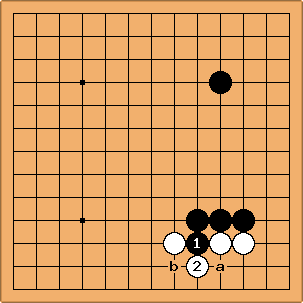 If White doesn't answer Black's threat, Black can create 2 cutting points, a and b, only one of which White will be able to defend. 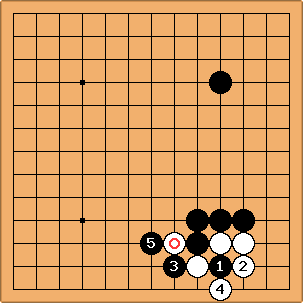 In this case, the marked white stone at the open side is more valuable than 2 white stones in the comparatively narrow corner. So, Black cuts at a, playing

. (Cut the side you don't want.) Black can capture White in a ladder. 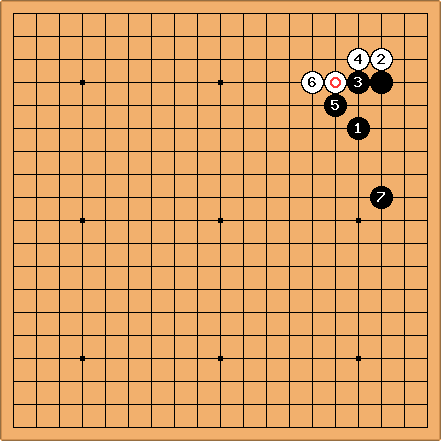 is Black's mistake. The head of its 2 black stone group is already covered by the marked white stone. After the natural response of

, the two stones have no more liberties than before

. This is a typical case of what is called "Ja-Choong Soo" in Korea. It can be seen in weak players' games frequently.