One can refer to the two-space pincers (cf. pincer nomenclature) as being at intermediate distance from the pincered stone(s). A one-space pincer will be more severe, while a three-space pincer takes better care of strategic balance. 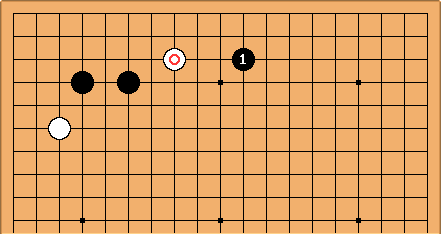 The white play at

is common in handicap games, and Black ought to react to it in such a way as to bring one or both white stones under attack. Simply defending the corner territory won't be good enough for Black.

The traditional play taught for this type of position is 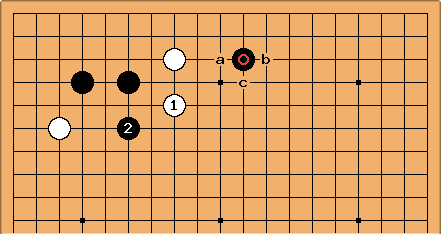 The idea is that White is likely to answer at

to pincer or at a. If Black played at b, White can get some sort of useful base at a. Now Black plays

or something similar: Black must avoid being shut in. After that Black probably prefers the pincer stone to be at

, not a: it is easier to keep it out of trouble. Black at a might be better in case Black was strong in the right corner; but White's play at c can be good unless Black can fight back strongly. 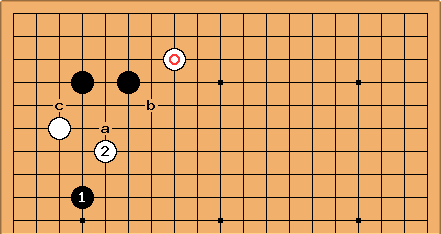 In pro games Black in fact chooses this pincer

as often as the 'book' play on the upper side. But in any case the distance is the same: two spaces. White's common answer in pro plays is

, jumping out with the knight's move. This 'moves' White's weak groups apart, to a greater extent than White at a does. (You could say that White likes to make the 'gap' between

wider, so that a black play at b would have less effect: cf. small gaps.)

At this point Black is interested also in playing at c to make White heavy. Again it is better that

shouldn't be too close.