Path: <= All about influence =>
Sub-page of Influence

Bill: One thing, I think, that needs to be done is to distinguish between at least two senses of influence. One meaning is as in influence function. Another is as in outside influence, which is a common translation of the Oriental terms. (For the translations I would normally prefer strength to influence, but there we are.) Simply giving those terms as synonyms for influence is inaccurate.

RobertJasiek: An influence function is not influence itself but (supposed to be) a numerical approximation of influence. So there are not two different meanings of influence - rather there is influence and there are functions.

Bob McGuigan: When I first ran across the go term influence I thought of it in the same sense that the word is used in geo-politics, as in sphere of influence. It meant that if a place was in country X's sphere of influence any other countries interested in that place would have take country X into account and modify behavior accordingly. This is very similar to the meaning of "outside influence", I think. If group has outside influence if it limits the other color's actions in that area. I'm not familiar with influence functions but I imagine they are a way of, algorithmically, delineating regions of influence of groups or maybe also quantifying the amount of influence a certain group has at each (nearby) intersection on the board. If an ideal one could be developed then the two concepts would be equivalent since a group would have outside influence if a non-trivial influence function could be defined for it. But I am curious as to whether "perfect" influence functions can, in practice, be defined. Seems that would require a lot more knowledge of go than we have at present.

RobertJasiek: A perfect influence function is defined in Joseki Volume 2 Strategy by referring to either player's n-connection, n-alive and n-territory of every particular intersection at a given moment during the game.

Velobici: A problem for kyu players is in handling and utilizing influence/thickness. One item I am currently struggling with is using it to attack severely enough to accomplish the eventual conversion of influence/thickness into territory in another part of the board. It seems to be a tough combination of severity that threatens to capture a group without the commitment to capture a group that may lead to desperation capturing races or worse the attacking group becoming the attacked group. Its putting into practice on the go board the concepts illustrated in Geo-Strategic Lessons from Go. Hard stuff.

Jasonred : hmmm... I try stuff like either herding an opponent into large walls I've built, or building a moyo nearby. Also, a nearby group that would otherwise be weak becomes strong because of said wall. But, how about 1-2 stones? How much influence does that gain me, and what do I do with it?

lynx: The problem with influence is that it's very vague, and, after enough thinking, doesn't really describe anything at all. Naturally, ones stones will effect the board. Naturally the one who takes more influence will have good center prospects. But influence is separate from thickness, which is a very useful and important concept. Perhaps thickness is a higher form of influence? At my level (2d), I never hear about making influence. I hear about making thickness ^^.

A framework could be considered an "area of influence" because, although your stones are highly affecting the area, it is not yet territory. Your opponent can invade, but his stones will be cramped by the presence of your stones, it might be difficult for him to make a base, and he might fall under attack. I believe this is the traditional sense of "influence" when used to describe for instance "black's area of influence". So influence is when your stones affect an area of the board enough to where it can be called "your area" as opposed to "open space" or even "your opponent's area".

A good example of an area of influence in the definition I'm coming to understand is when you have stones at D4, F3, D10, and C14. 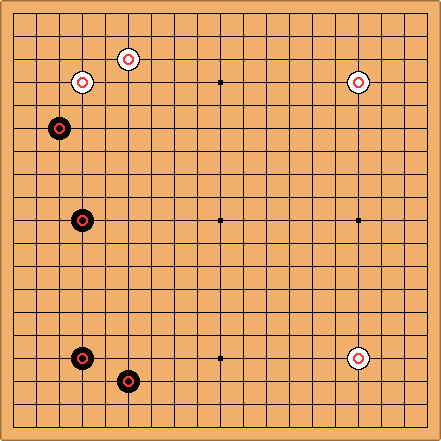 It's very clear that white is developing the board faster than black, but this illustration is to demonstrate an "area of influence" for black. It's not quite territory, but white's options are limited when he eventually chooses to invade.

RobertJasiek: Ideally (great or ultimate) thickness has no defects but weaker forms of (ordinary) thickness or thick shapes can have defects.