This variant is a combination of Tibetan Go and Cards Go. It uses a 15x15 board, the Tibetan Ko rule, (the rest of) French rules, and 10 community cards. It needs a proper name. :) 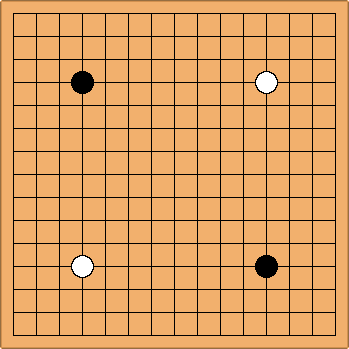 1: Players take it in turn to make a move. You can either place a stone on the board, or take a card for the pile, and play it as your turn. (Cards can only be used once)
2: White has a 5 point head start to compensate for him going second.
3: diagram about capturing stones
4: It is illegal to play a stone at a point where a captured stone lay on the last turn.
5: The game ends when you are unable to make any more points. If you believe the game is over, you can pass. Be careful, your opponent doesn't have to do the same.
6: diagram about how to score

Settlement = Any stones horizontally or diagonally touching each other - Stone count - Liberty count - localTerroir, which we will generate only from the first pass

If LocalTerroir?/LibertyCount < X Then regard group as fairly dead and remove % of its localTerroir

If LibertyCount = 1 Then regard group as fairly dead depending on move, and remove % of its localTerroir

fTerroir is not re-run, we simply adjust the count

Positive and Negative count are used to make a Score Estimate

Is it possible to combine Bughouse Chess and Go?