Holigor fills his own eye

Can filling your true eye be a good move in go? When I tried to program my own go-playing algorithm, I forbade the program filling its own single-point eyes. I thought that there is no harm in such a strict rule because it is impossible for filling your own eye to be a good move.

How about, never fill your own eye if you already have at least two eyes, or there is hope of gaining another eye?

HolIgor: The notion of two eyes is too difficult to program. It requires introduction of many complex notions such as a group of stones, semeai, seki, i.e. understanding of the game. One has to start somewhere and the rule of not filling a single-point true eye defined locally seemed a good start. The sad news is that with this rule the program would never see how to kill in the situation shown on the diagram.

Jasonred: Man... so, you could never program it so that the com learns how to generate two eyes to keep a group alive? You could just kill it every time with its lack of tsumego?

HandOfPaper: The notion of 2 eyes is not too difficult to program. There is an algorithm (I forget whose name is on it; look elsewhere on SL for it) for determining unconditional life and it takes care of all the instances of 2 eyes (including the cases where 2 eyes are shared between 2 groups, like when 10 stones live in the center). It seems to me that one should try to rigorously prove nontrivial (i.e., better than "The group encloses no other eye") necessary (if you're lucky, they can also be sufficient) conditions for the filling of a one-point eye to be a locally optimal move. It would be very impressive if they were even usable in a program (a more realistic hope is that they are 'partially usable' by relating this to other concepts (like the values of moves) for which we have fair heuristics). Is anything known about this?

Little did I know. In one of my own games I filled my own true single-point eye and that was the best move on the board. 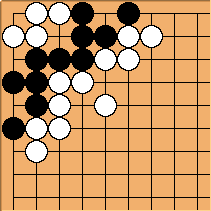 Black is dead by virtue of a rule that a group with an eye kills a group without eyes.[1] To capture the black group White has to fill all outside liberties and then a move from inside becomes possible. 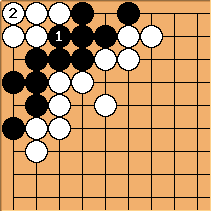 hoping to capture White's group before the liberties are filled. White has to answer with

Unbelievable. The marvels of this game never end.

HolIgor: Certainly, not. That's why White had to fill the eye in the example above. The correct statement is that a group with an eye can often fill one mutual inside liberty, so it has an advantage in the semeai.

Dieter: No that is not the reason. In a eye versus no eye capturing race, the eye party will never have to fill an inside liberty. The correct statement is that a group with an eye counts all inside liberties if the other group has no eye.

Anonyous: White fills his eye because he is going to lose the capturing race. Filling the eye means that black is not alive after winning the race.

exswoo Eh, I guess it's good to answer these questions just for reference. I've probably read this page at least three times these past couple of months and the fact that these two problems weren't answered always nagged me. 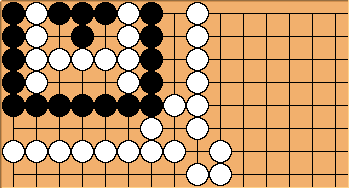 -Here, White is dead because Black has one extra liberty after he fills in the three mutual liberties and starts filling in the bulky five. Capturing bulky five gives a total of 6 liberties for White but Black has 7 outside liberties left.

The issue here is that a bulky five gives 8 liberties, not 6. 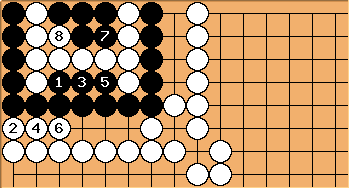 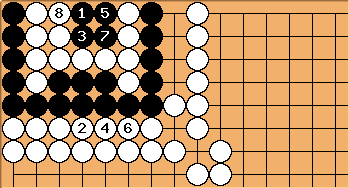 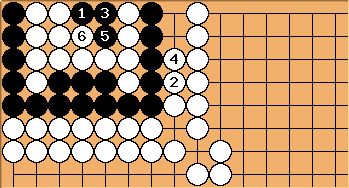 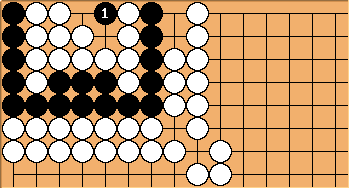 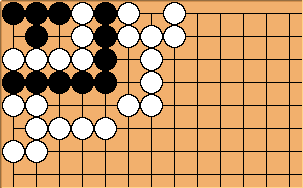 -Since Black doesn't have enough outside liberties to win the capturing race, Black has to be satisfied with a seki.

- HolIgor: It is not a seki. Black's outside group will be eventually killed if Black cannot kill faster. 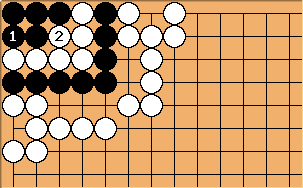 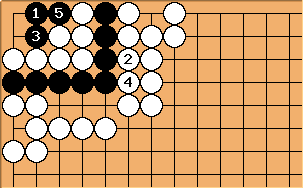 Too bad for White. 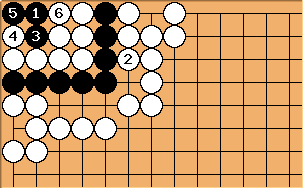 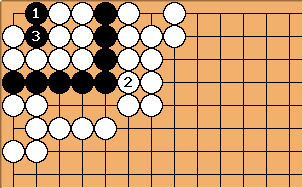 It seems to me that Black kills first.

Maybe I am wrong; but it seems that here we meet with another weird property of the corner. Black has to spend fewer moves to kill than in the attrition formulas, which I don't remember. Reification.

"Attrition formulas"? You refer to four is five and five is eight and six is twelve, presumably? Anyway, the "weird property" has a page: big eyes can be small in the corner. -- Karl Knechtel

I did not read out the first example, but it seems to me that the purpose of this pair would be to show the difference between an automobile in the corner and an automobile on the side. 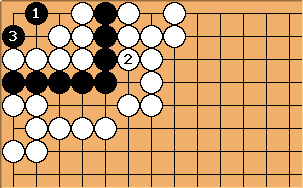 White has to play 3 instead. But this only results in a change in the order of moves.

exswoo:Whoops. Silly me, I was somehow under the impression that W needed to fill in the two mutual liberties to capture B, which is certainly not the case here.

mgoetze: Well I was playing 5x5 on KGS just for fun today, so I decided to fill my own eye just for fun. Fortunately we were using New Zealand Rules so I didn't lose any points for this. Unfortunately, against 25 komi, the result was still a jigo. So I can safely say that filling your own eye is neither good nor bad.

This last example seems silly. Since you are playing New Zealand ruleset, the Japanese count of 23 points for Black doesn't matter. But giving White 25 komi is guranteed to either end in jigo or to let White win (If Black plays very poorly). White could just keep passing... so Black needs to start play with moves that are marginally bad (just to entice White to play)... but since you are using New Zealand rules, Black can't try to win from making a White stone capture (because it doesn't count). I also feel that

was an unnecessary move and does not display the use of filling in an eye as the rest of this page does.