I am amazed by the fact that go does not have 'sacrifice' in the way as this notion is used in chess. Well, some plays deliberately lose some stones seeking for other benefits, but this is so common that can hardly be called a sacrifice.

The notion of a sacrifice is changed to a notion of furikawari, i.e. exchange. In go a trade-off happens almost at every move. Even in yose a game may turn into a competition of mutual damage if nobody wants to give in.

Arno: could you tell me how in chess a sacrifice is not beneficial? Usually you "sacrifice" a figure in order to gain a more dynamic position or some other kind of benefit. In go you sacrifice stones in order for aji, influence, territory, or simply to get sente. I think a sacrifice without "return on investment" should be called a mistake, no ? ;o)

Let us consider quite a common pattern. 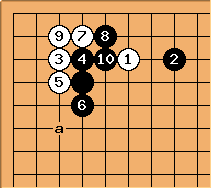 White's approach with 1 sets up some tactical possibilities before invading the corner. White is ready to give this stone away.

With 2 Black makes a sacrifice of the corner (quite a large profit for White).

Now Black may choose to take the white stone (1) or to let it connect to the stone in the corner.

These moves give up something, yet they are nothing really to talk about. Routine.