Jasonred : I was fine with this up til a while ago, when I suddenly remembered that Go is a zero sum game! How can there be such a thing as a picnic ko? There's no such thing as nothing to lose, since forcing your opponent to lose 10 points is the same as winning those 10 points yourself!

Bob Myers: I must be getting old because I can't make head or tails out of this statement. It sounds sort of like the lady who went shopping and saved $100 by buying something on sale and then "paid for" another purchase using that $100. I think Jasonred is confusing actual gains and losses with "gains" coming from not making a hypothetical loss, or losses coming from not making some hypothetical gain.

If there is a situation where I lose a ko and the opponent makes a 50-point capture, whereas if I win the ko I just get to connect a half-point ko, that sure sounds lop-sided to me. Are you saying saying that since I avoided losing the 50 points I have therefore won 50 points? Fundamentally confused (and confusing).

Another, minor point: I don't agree that hanami kos necessarily arise from tenukis or mistakes. Some josekis end with residual hanami ko possibilities, for instance (TODO: give example). I can make a dual-purpose move which threatens damage on one side and a hanami ko on the other, etc. I do not see what history has to do with a hanami ko. A hanami ko can be characterized just fine as a hanami ko by simply looking at the situation. What am I missing?

Yet another minor point: Even if the side at risk of a major loss manages to win the ko due to having enough big ko threats (a double ko elsewhere, perhaps), I would still call this a hanami ko--it's just one that I didn't happen to win. 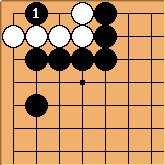 Bill: Bob, what I think you are overlooking is that in a hanami ko one player has more at stake than the other. That lopsidedness typically arises through a mistake or overlooking a ko threat.

(Referring to diagram above) In this corner

kills White. Do we say that

makes a lot of territory for Black but

would only make a little territory for White? No. Both plays are equal in size. Before the play Black already has equity in the corner because the White group is unsettled. Despite appearances. 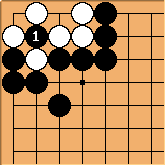 Similarly, we cannot say that this ko is a hanami ko, just from looking at it. Black already has equity in the corner. He does not gain more per move for killing White than White gains for living.

Chris Hayashida: I'm confused. Isn't this a hanami ko? I didn't think there was any doubt.

But this all goes to show that go theory takes an attitude rather different from what you need if you are 'playing for money'. It is not that surprising that pros disdain some of it.

Bill: Jason, you are right. Hanami kos arise when a player ignores a play that threatens to make the ko. Another way they arise is from a mistake.
Looking only at the current local position, you can rarely call a ko a hanami ko. You have to know the history.

eretan?: I think the value of *any* ko is equal for both sides (i.e. there is no such thing as true "lopsided" kos). This is because, like Jason said, Go is a zero sum game. The total value of the ko is what you lose if you lose the ko + what you gain if you win the ko, which is the same for both sides. Hence the threshold for the ko threat to be ignored/responded to is the same for both sides. I agree with Bill that in defining a "hanami ko", history is important. I also agree with him that a hanami-ko probably arose from a mistake, where one side loses what *should* be his, should he lose the ko.

Dieter: Heuristics and concepts like these exist because we haven't figured out perfect play yet. Some variations end up in ko and are acceptable. Some end up in ko and are not acceptable. To make the difference, concepts like flower viewing ko exist: "You may think this is acceptable as a result, because it is ko. However, it is not a balanced ko for which you both can expect adequate compensation elsewhere. It is a lopsided ko." So the concept is there to prevent and clarify mistakes.

To think that such concept is useless, equates a game being a zero sum game with perfect play to have been figured out.

It looks to me like another interpretation misguided by a static approach, instead of the dynamic approach that should be behind our thinking.

I hope this solves the zero sum game issue: 1 Player has the option to start a ko or play safe. If he plays safe, the local score is +0, but in case of ko the local score will be +30 (win Ko, opponent loses a lot) or -5 (minor loss).

The comparison with not playing ko explains this "one player can lose a lot, the other virtually nothing".

Charles Looking at what is written at picnic ko and sente ko, I take this to be a sente ko (sense 1); which is called there an extreme case of picnic ko. But Bill comments on the picnic ko page that a true picnic ko results from a tenuki.

Bill: To the best of my knowledge, I was the one to coin the term sente ko some years ago. But since it is just the combination of two common terms, I do not feel that I am the arbiter of its usage. :-) However, I was surprised to hear it called an extreme form of picnic ko.
As for my remarks about tenuki and picnic ko, again, I do not feel that I am an arbiter of usage. I did not mean that all picnic kos arise from tenukis.
The question of picnic ko arises if White wins the throw-in ko, to leave this position: 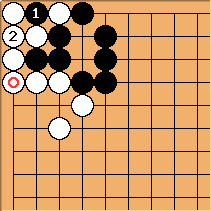 is much hotter than

, so the ko is rather easier for Black to fight than White. For that reason, can we call this a picnic ko for Black? I think so, but others may disagree.
However, since Black has played tenuki and let White win the original ko, Black may lose his 2 throw-in stones. (He has already lost one; now he is trying to save the second one.) For that reason, we may consider this a picnic ko for White! ;-)