There are 4 kinds of basic and common tools for getting good local positions: iron pillar, one space jump, knight's move, and diagonal move. Most moves for getting a favorable local position are made of these basic 4 Haeng-Ma (including even top level pro games). 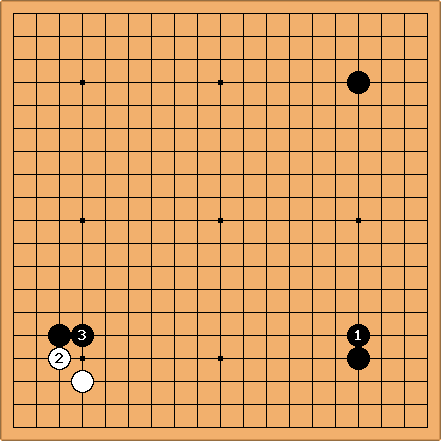 A move which makes two or more stones in a row, regardless of location. Simply, you can regard all unconditional connection moves as "iron pillar moves". In the lower right side corner, you can see what an iron pillar move actually is.

An iron pillar move makes solid and unconditional connection of stones. So there are no ways for white to cut them. Solidness is its merit.

The demerits of "iron pillar" are its slow speed for advancing, and lack of flexibility. Sometimes, it happens that we had better give up a part of stones strategically. What about iron pillar moves? For them, we have only 2 choices, saving all of the stones which are connected by "iron pillars" or giving up all of them. No other ways to choose for us in the case of iron pillar moves.

In lower left corner, there is one example of use of iron pillar moves. White played the diagonal (attachment) move(

) on black stone. Against it, black played

. In the position, "locally", this

is the only move.(Absolute move) -

Mind you, even God of Go can not find better move for black in this "Local position". I say again,

is the only move "Locally speaking" for black.

The following is more detailed comments on the reasons why

is the only move against 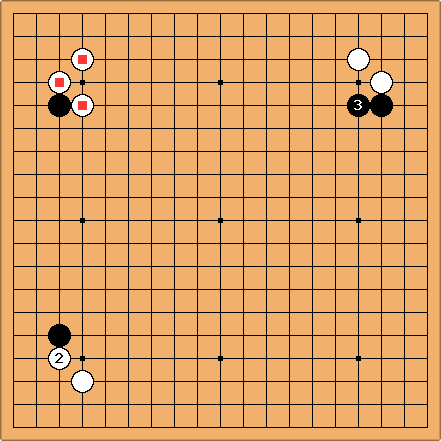 , reducing one of its liberties directly. Now, we know that liberty is an important factor on stability of stones. Now, this local position is very hot (especially for black), in ordinary go terms, very urgent situation.

What would happen if black plays tenuki? White will dominate (oppress) black almost completely, so that black's one stone will have lost most of its powers (due to its less liberties, suffering from lack of oxygen) so it will not be able to work its own functions well and get weaker and weaker, eventually become "a garbage stone".

In upper left corner, black stone is hurt badly by 3 marked white stones. The result of this position is disastrous for black.

In upper right corner, we can see a correct local move for black. The iron pillar move towards the center is the best move in this local fight. In this position, black and white each invested 2 stones. Black stones are drawing a straight line with 2 stones (advancing to center), while the white stones are making a "diagonal" line.

Considering just these 4 stones, black has (obviously) a better result than white. Remember that 'in Go' all of stones like to develop (flow, grow) along the straight lines, if possible. Now, in this position, situation is this - black's straight line vs white's diagonal line.

Along straight lines, stones can develop into more solid and powerful positions, than along diagonal lines. Thus, confining your attention just to these 4 stones, you should see that black got a better local position than white. 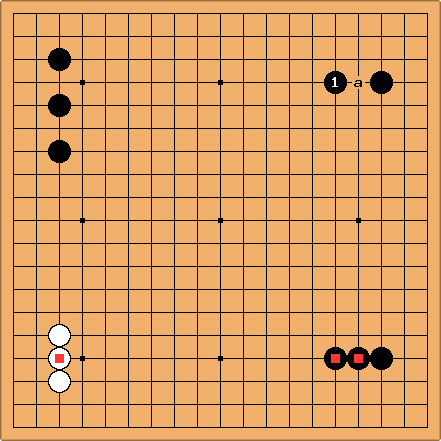 shows what one-space jump is.

In our diagram, black is walking to the upper side from the corner with

(one space jump). Basically this move is used for advancing in a certain direction, whilst keeping a connection between 2 stones.

From this point of view, "one black one-space move" (

From this point of view, the one-space jump is a more efficient way to develop than the iron pillar move. It can make us achieve the same effects with fewer stones (if used properly).

Two local positions on the left side show clearly the advantage of one space jump moves. While the white corner is crawling up the left side slowly from the lower corner (although they are very very solid,... too solid), the upper left black corner is walking down the left side with light steps. This faster advance will give more control on the board for the black stones at last.

This slow and heavy movement of white stones in the bottom left area is a simple example of "overconcentration of stones". When there are "unnecessary stones" for performing their own functions, and can be omitted in certain (usually local) position, we say that those stones are "overconcentrated" in ordinary go terms. 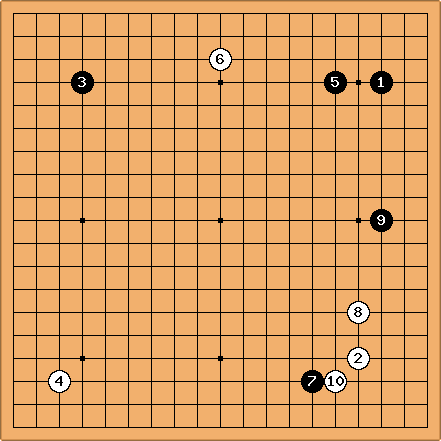 For getting a general idea of how to use the one space jump properly in real game, it would be helpful to watch the following sequence up to move

in the next 3 diagrams. Black was Handa 9p, and white Takagawa 9p. At this time, getting just a general and basic idea of these moves is enough. No problem if you can not see the meaning of each move exactly.

Brief comments on this game :

were used to make stable bases in corner. For example, with

, black's 2 stones made a solid base in the upper right corner, so no need to worry about survival of stones in this area; Black can hope to have a promising prospect of development to upper and right side, being supported by these strong upper right corner stones. 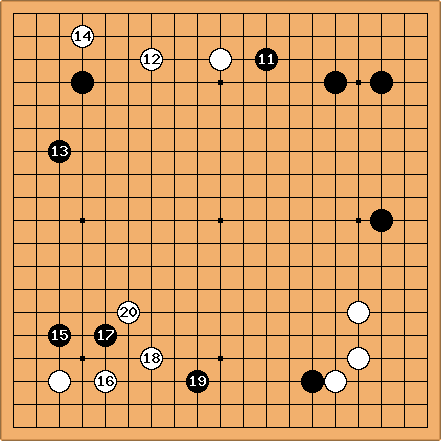 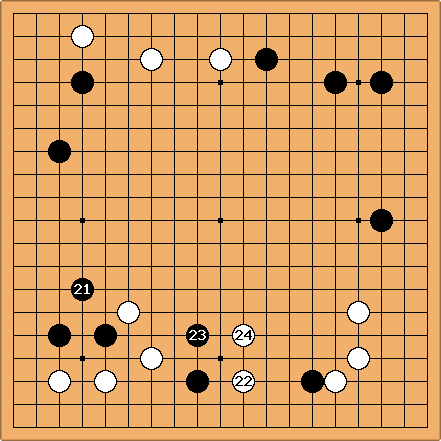 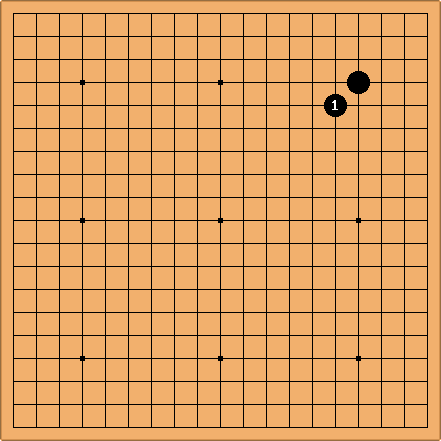 Another basic move (step) of a stone, used to develop diagonally. In diagram 3-1,

Like the "one space jump" and "iron pillar", this is a common and solid approach to the development of stones.

In terms of (just) connection of stones, this haeng-ma can be said to be more solid than "one space jump" haeng-ma. But this move is a bit inefficient and dull. It allows less control on board "in itself", compared to one space jump move.

The board is a world. Stones (of black and white) struggle and fight for making a more favorable environment to make sure of the survival of their own stones there. This world is composed of 2 kinds of lines. One is a line of longitude and the other is latitude. Both kinds of lines are composing the "board world", intersecting each other. Consider that both kind of lines are "straight lines". So, when stones develop (flow) along these straight lines, they make "straight line of stones", the position of these stones is recognisably strong (and powerful).

A little exaggerating and oversimplifying, it can be said that "stones which flow on diagonal lines are against the nature of their world".

This is why I said that the "diagonal move" is a little less efficient than the "one space jump" (in-itself), if we don't consider surrounding stones near them, but pay our attention to just a "diagonal move in itself".

If that's the case, why, when (and how) should we use this move?

3-3 Basic (typical and common) use of diagonal move

In most of cases, (generally speaking), 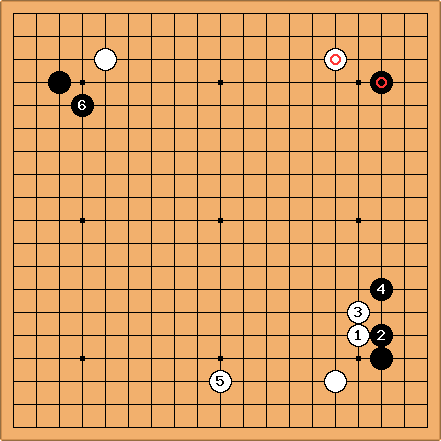 In upper right corner, the marked black and white stones make a "knight's position of 2 colors", facing each other between 1 line. This marked white move (so-called "knight approach to corner") is blocking black's way to upper side, so preventing black's further development.

Each of them are putting down roots in the corner area comfortably, having 4 liberties, and there are no friendly (or opponent's) stones which can support them nearby. Thus, this local position is an even and balanced one for both presently.

Let's see how to make a "more favorable local position (better board environment for survival of stones)" for white, assuming that it's White's turn to play. One of common ways for this is shown in lower right corner. In this sequence, white forced black to crawl along the third line, and got a higher position towards the center and bottom side. White played an extension move (

. Finally, white had promising control on the lower side, so it became hard for black to guarantee the survival of his stones in this area. This follow-up is pretty good and proper for white when the value of bottom side and center is important.

If so, how to prevent it for black? The diagonal move is one of the effective tools in this case.

in upper left corner is that move for black to prevent white from getting a higher position (side and center influence). 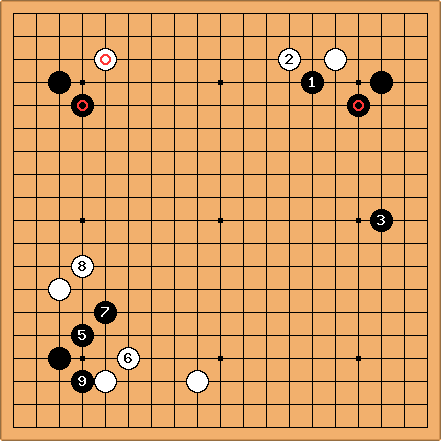 And notice that another (second) knight's position of 2 colors was made there, after Black's diagonal move. (Marked black and white stones in upper left corner)

Now, black can aim to press the white stone with help of his diagonal move, and can get a higher position as White did in the previous diagram. (sequence in upper right corner.)

The lower left corner sequence is another example to show a typical use diagonal move. From

, you can see that all of these moves are played to get a higher position (advancing to the center). And you should carefully notice that each of the black and white stones is in a relationship of knight's position of two colors. 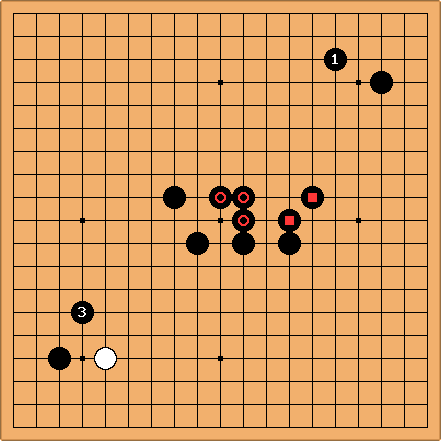 In the upper right corner, we can see the easiest example of a Knight's move,

is another easy and realistic case of using knight move.

Anyway, this Haeng-Ma is a bit more skillful and advanced way to make steps of a stone, compared to previous three tools (One-space jump, Diagonal move, and Iron pillar). In terms of "efficiency of development", it can be said that this move is "an abbreviation of three iron pillar moves".(see marked 3 black stones with circle in center). Of course, if you want, you can say this aspect of Knight move in another way, like that knight Haeag-Ma is a replacement of "one iron pillar and one diagonal move"(Marked 2 black stones with square in center).

Point is simple . "In terms of efficiency of development" knight move is the fastest way to make development of stones, so best among all of 4 basic Haeng-Ma in this respect.

But,(unfortunately for us), this obvious merit of knight move is not a free one. This move sacrifices solidness of connectivity between stones, for achieving fast development. This move is thin, compared to other moves, and...sometimes can cause serious trouble because of its weak connectivity. (Usually, when there are some or many unfriendly opp's stones which can break easily our stones connection).

So, when we use this move, how to make up this weak point is one of main issues about using Knight's move. 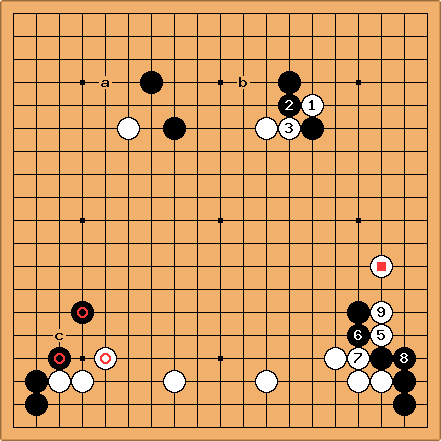 Notice the position around (a) in upper side. this position is "basic form" of "knight's position under opp's threat to cut it". Position (b) shows standard follow-up of cutting black's knight's position. you might think that, black can capture

, using ladders. But we should know that this is "potential trouble" for black, and depending on surrounding position, this weakness in its connectivity can cause big trouble for black.

In lower left corner position (in fact, this is a basic joseki) is a more realistic case to show "potential trouble of weak connectivity of knight move". You can see that marked black and white stones are composing "basic form" of "knight's position under opp's threat" which was already shown in Position (a).

Presently, there is no serious problem for black.

But if one more white's threatening stone (marked white stone in right side) is added, as in lower right corner, black's potential trouble of thin connectivity of knight's move can come to be realistic and make a disasterous result for black. Also notice that the sequence of cutting from

is identical with standard cutting sequence in previous position (b).