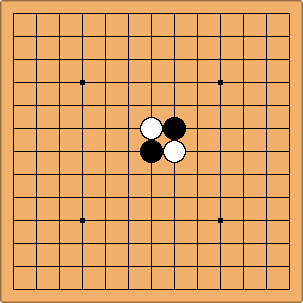 This is one of the most basic cross-cut positions. In this position, if Black could capture one of the White stones, he would be able to connect his two stones and have a very strong position for the fight. This would be the best result for Black. This result is only possible, however, if White makes non-optimal (i.e. very silly) moves. 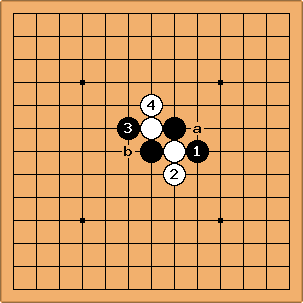 So, if Black ataris either of the white stones (

), White will merely extend, and it becomes obvious that Black cannot kill either white stone. If Black ataris both white stones, he will strengthen White while leaving cutting points (a and b) in his own position, making it harder for him in the fight that follows.

This position is a failure for Black because he tried to kill White stones which were impossible to kill. As a result, Black has strengthened White by increasing Whites liberties, helping White move towards the side, and leaving cutting points at A and B in his own position. 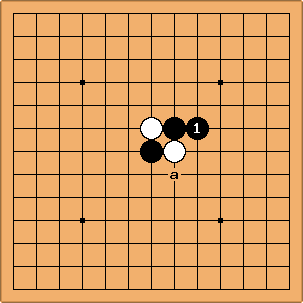 In order for Black to gain an advantage in the position, what should he do?

1. Black should not force White to strengthen himself by non-working (useless and even harmful forcing (atari) move).

2. Black should strengthen his own stones by increasing their liberties and advancing toward other areas of the board, while at the same time maintaining a connection to his center stones.

In this local position, the best move to fulfill these two requirements is the extension move(

) which aims at ladder capturing at a. 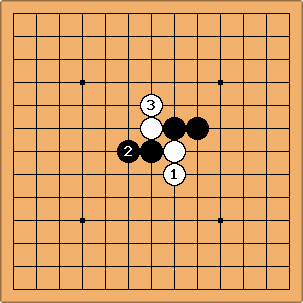 All of the reasons presented above also apply to White. White must therefore assume that Black will make the best response to his moves. So in order for White to get a good result, he will play the basic extension as well, and not a useless forcing move (Atari). Therefore,

is a logical continuation for White.

is the next logical move. For white,

is the correct follow-up.

In conclusion, in cross-cut positions, a simple extension is always the first move to consider for strengthening your stones without helping your opponents. Of course, this principle may or may not apply depending upon the surrounding position, but commonly applies in many cross-cut positions. Do not play a useless forcing move (i.e. Atari) unless you have a very good reason for doing so. 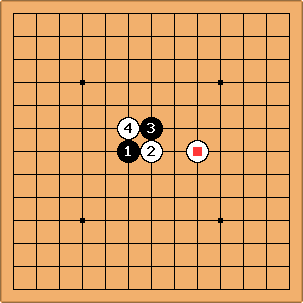 Unlike the previous example, in this position a supporting White stone has been added (marked with a square). The extra White stone changes the balance in power between the black and white stones, therefore the most reasonable move for Black has been changed. More specifically, Whites friendly stone strengthens

, putting significant pressure on the

stone at the same time. To get a rough idea of how the extra White stone supports

, the following sequence may be helpful. 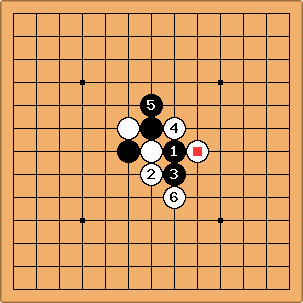 Now, lets look at diagram 6-2-1 again. What has been changed by adding a White stone?

In this position, both

are equally valuable as cutting stones. They are different, however, in that due to the presence of the marked White stone

has more pressure on it and is therefore weaker than

The reason for this being

s proximity to the marked stone. The closer distance significantly raises the pressure upon Black 3.

By the same logic, it follows that both

are equally valuable, but due to the presence of the marked stone,

These are the main points black must consider before deciding upon a reasonable move.

Considering the conclusions of the preceding paragraphs, the following should be clear:

Therefore, the most efficient move for black is one which can simultaneously strengthen Black 3 and attack White 4. 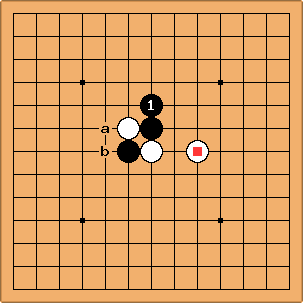 is the right move to perform these jobs. This move strengthens the weak center stone by increasing its liberties, and also threatens the white stone with a ladder if Black plays at a. b is also a strong follow-up for Black. 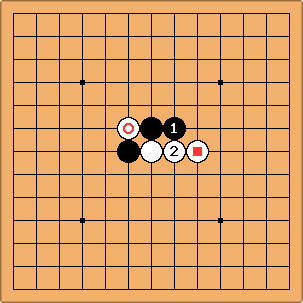 You may wonder why this move is not good for Black. There are two reasons why this move is inefficient. First, the pressure Black puts on the weaker white stone(marked with circle) is significantly reduced compared to the correct move. Second, the right side is not a good direction for Black to increase his liberties because of the presence of the marked White stone. White can use this stone to effectively reduce Black's liberties by playing 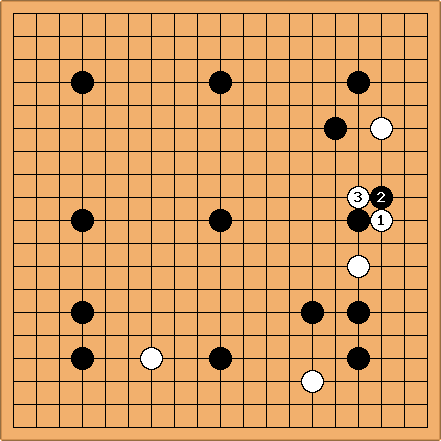 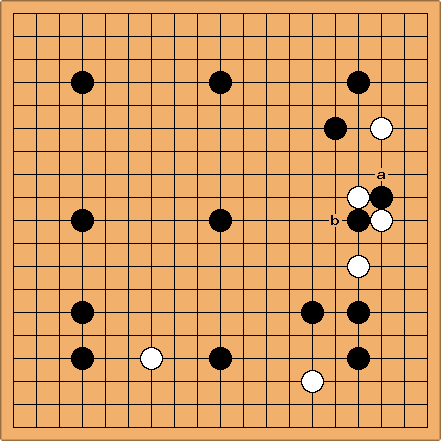 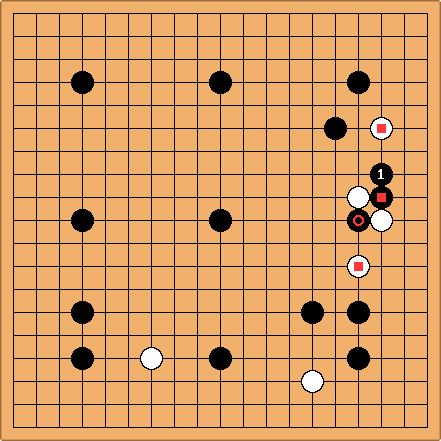 The pressure w's supporting stone is putting on

, because it is under less pressure by white's supporting stone.

All things being equal, common Go principles dictate that strengthening a weaker stone by increasing its liberties (here, by extension) is more correct than strengthening a stronger stone. Although we didn't check any follow ups yet, general principles strongly imply that this

is wrong direction to extend. 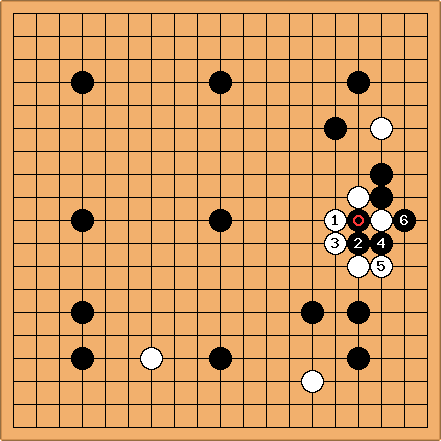 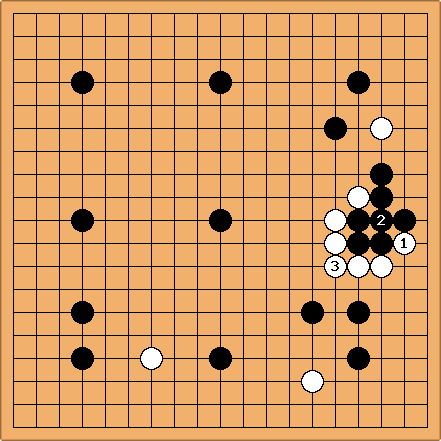 The shape about 2 is called dango, this overconcentration of stones is often considered ineffiecent 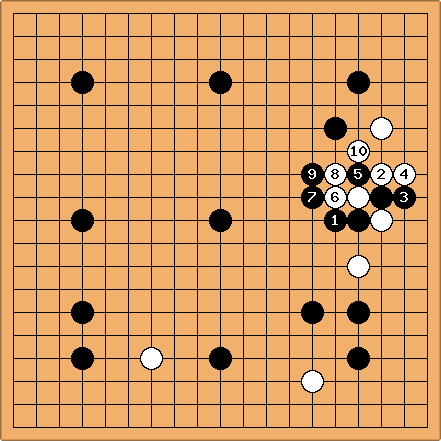 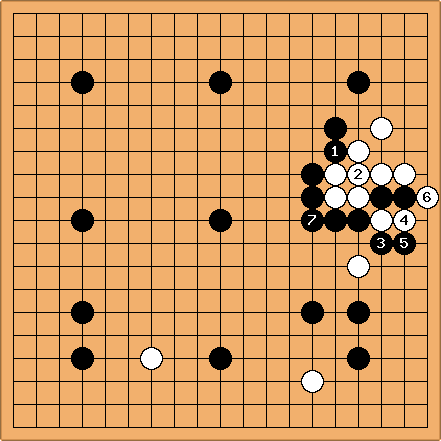 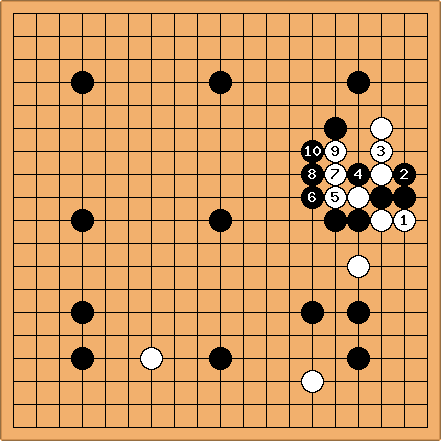 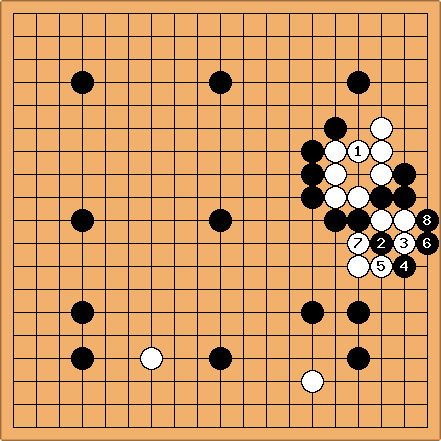 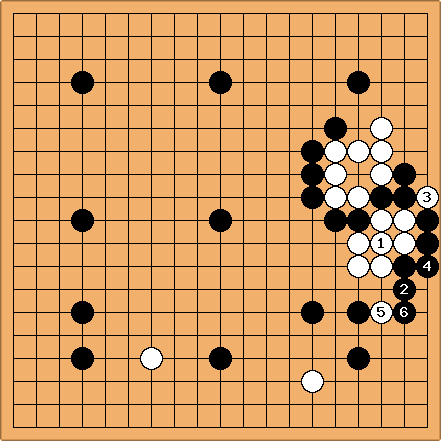