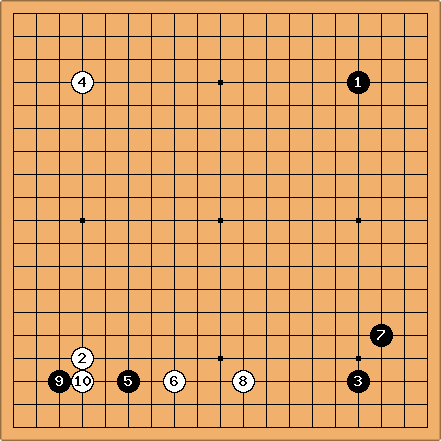 Dieter: I wanted to use this game to discuss the concept of thickness. The choice is arbitrary, except for it being of Korean kin. Feel free to make it a full comment though. 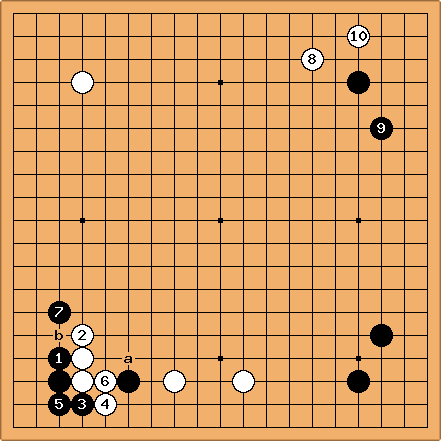 White has a strong position at the bottom, although it would be completely thick (but maybe overconcentrated) with a move at a. Black has a defect at b (although not readily exploitable). 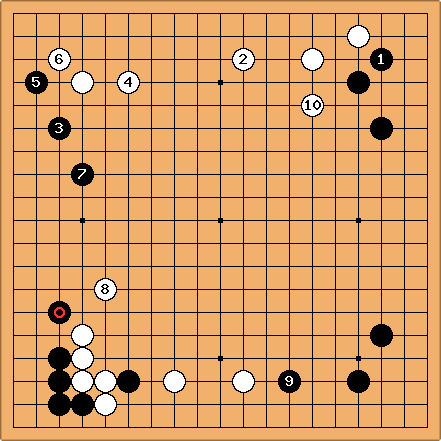 Dieter: Some people may be wary of playing

around, for fear of playing too low.

creates more influence and strength for the bottom. Isn't

too close to thickness? Too close to a stable position? Is White's top thick or just stable?

Corentin: this game was audio-commented up to move 72 by Jiang Mingjiu Chinese 9p on Sunday Feb 20, 2005 in KGS (room>lesson>Ing's Goe Internet Class). Scribe wrote down the professional's main points. (URL to game record with comments appears on Scribe's page.) He spent about 50 minutes on this game, of which at least 30 minutes were on the fuseki. I don't remember any comments being made on this move

, but my memory is slack... As for the 'overconcentrated move

' (see 2 diagrams below), although someone asked why it was played, he didn't comment it. He gave some variations (unacceptable for either W or B) of the fight that starts with

Alex Weldon: Given than White invades the shimari with

in the next diagram, perhaps

was played in anticipation of this, allowing B to respond at

in the next diagram. It also has the double purpose of aiming at

in the next diagram to flatten out White's position and reduce her thickness. It still looks overconcentrated to me and I wouldn't have thought of playing it, but it does at least seem to be a multipurpose play. 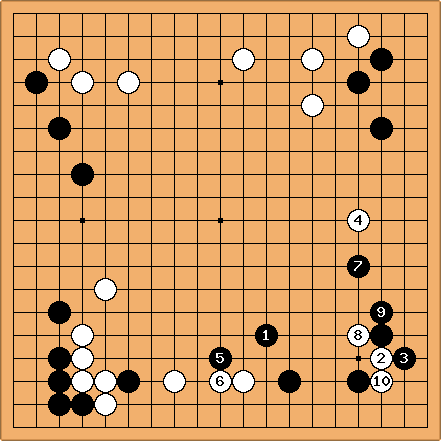 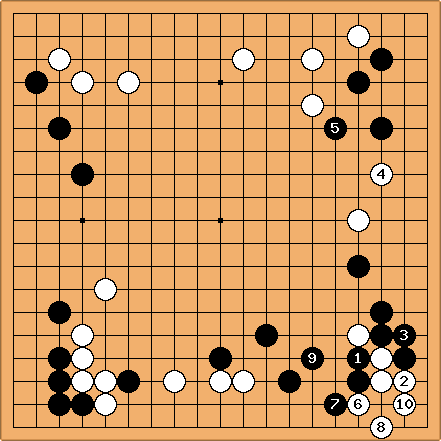 feels terribly overconcentrated. No doubt that Black is thick. 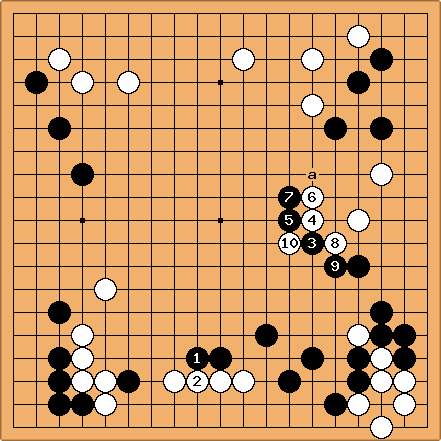 seems to violate all principles about thickness and makes territory with it. Shouldn't White have played lightly with

at a? Or is she right in leaning against Black's strength?

Alex Weldon: Hmm, my way of looking at it is that

is making territory while attacking, which is not nearly as bad as using thickness to make territory directly. Black is fairly strong on both sides, so he isn't really violating the principle of attacking from the weaker side, and territory made on either side would be close to thickness. I suppose that when one is thick on both sides, the normal way to attack is some sort of capping play, but I guess Black read out here that he couldn't kill or gain enough profit like that. Also, since the resulting sequence builds up power facing the lower side (which you later refer to as "central potential" rather than thickness) as well as territory, Black may already be planning his later sequence beginning at move 113. 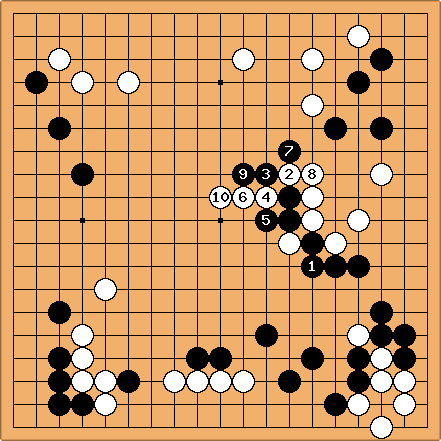 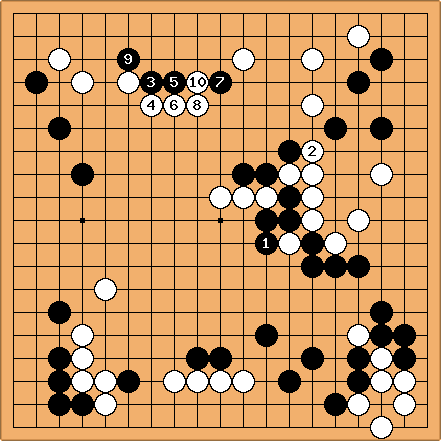 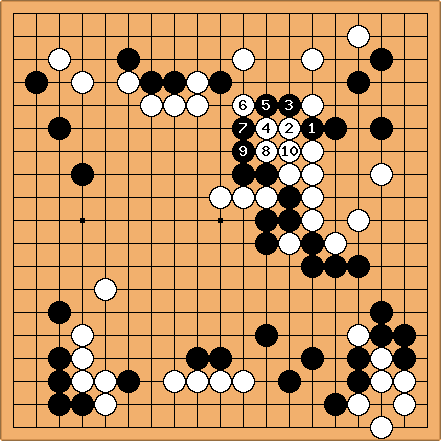 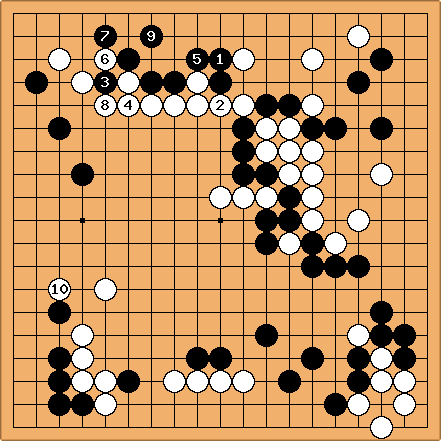 Dieter: W0 may be an overplay. Is White looking for added strength? 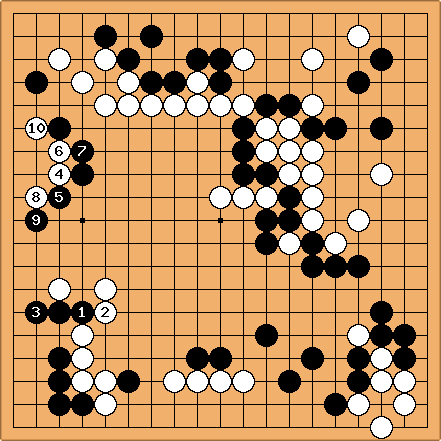 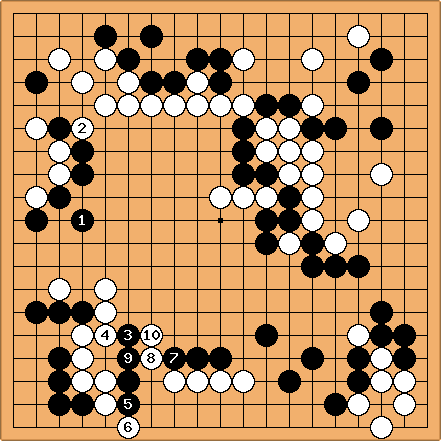 , Black finally attacks White's position, formerly known as thick. Black doesn't seem to use thickness to attack but rather the central potential. 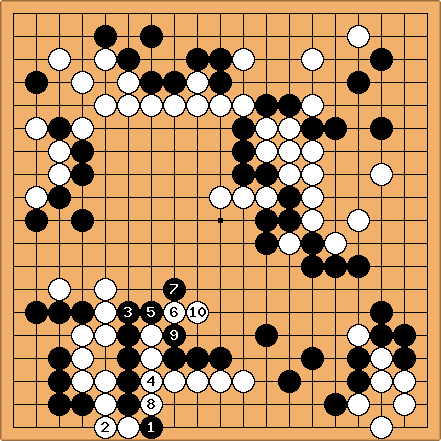 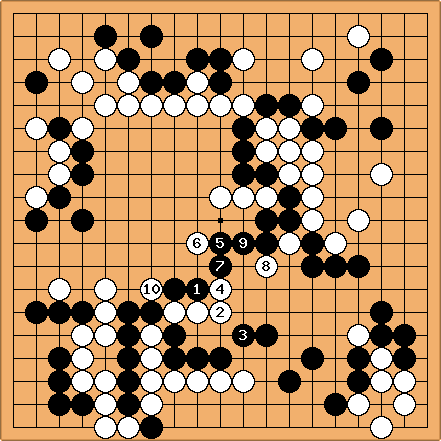 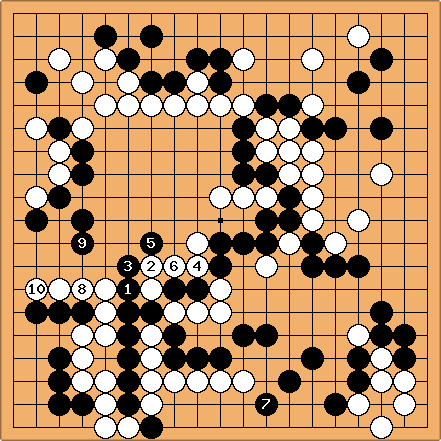 Dieter: The Koreans have turned 19x19 into small board Go. 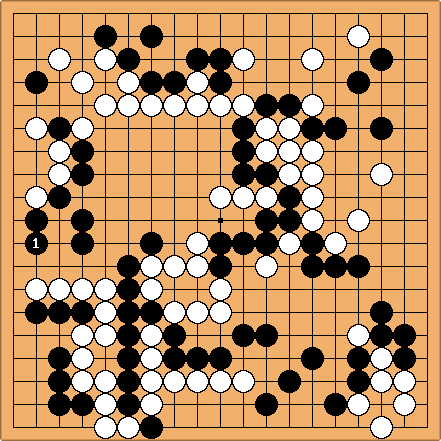