A chemical technician, and going to school to get my Associate's degree in chemistry.

A friend introduced me to go about ten years ago. I quickly got a)hooked, and b)frustrated at my seeming lack of ability. I guess it's a never ending quest, isn't it? I'm only about 22 kyu.

I play on both DGS and KGS as gtwade, though you won't find me very often able to play a live game. One more year of school, and that may change! Feel free to invite me to a game.

My current need is a support group for go players who teach go to their chess-playing workmate and now cannot win a go game with him to save their life. Where is that page?!

gtwade: Absolutely! Since you are more experienced, please set it up for us. I am still learning the ropes.

July 16, 2004: Here's my first attempt at adding an example. It's from the game I just finished with my coworker. He had made some good moves in the center. I must have been in a fey mood, because then I wanted to try stealing territory in the top left corner. This is how it happened: 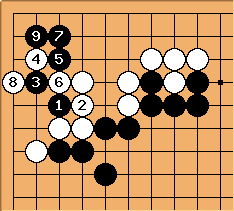 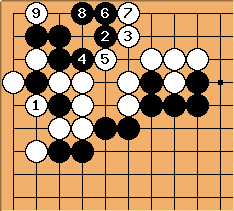 Yes, he took two stones, but I plugged away and eventually made some eye space! 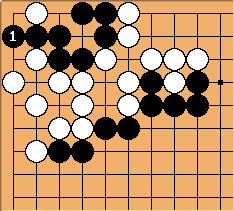 Hey, maybe there was a better way of doing this, and maybe territory was very small, but just imagine my satisfaction for a small victory like this! It was a very enjoyable corner.

http://www.dragongoserver.net/game.php?gid=66127. There was a scary moment when I had started a ladder and he was going to go through with it until he became convinced that it wasn't going to work. Fortunate for me, because I had misread it and it would have been disastrous for me. As it was, I managed to make good use of the edges; he took the center mostly. On to the next game...

<whine> On a reflective note, at what point does a go player feel comfortable and authoratative about go, to the point where he actually puts up a problem on goproblems.com or can discuss actual strategy on Sensei's? I feel very incapable of contributing anything more than rantings in my blog.</whine>

July 8, 2004: Victory is almost mine. I am playing a game with my chess player workmate on DGS. Until now he has been beating me even though I taught him the game. It's funny that strength and years acquainted with the game do not coincide, and that someone with a tactical mind will take to it right away.

Flash back to about 6 months ago. He is having a hard time getting the concept of go, and I told him to think in terms of the whole board. Ping! went the light, and it's been a struggle since. He plays a very aggressive game of go, unlike his game of chess, which is very defensive. Until recently, I have not known how to respond to that. I am being more cautious around his stones, defending while building a framework. Since then he has had a harder time on the board! :-) The game's not done yet. Even if I do lose, it will not be by much

July 6, 2004: Finding the BadukTV link on this site was a wonderful thing. Something or someone out there is trying to keep me honest, though. My computer at work has a fast network connection to the Internet; but my computer has no sound, so I can see the channel, but cannot hear it. My computer at home has audio but a much slower connection speed; so I can hear all the baduk I want in Korean, but cannot follow along with the game because I can't see it! My wife, if she were to truly understand what this dilemma means, would thank our slow computer for returning her husband to the real world before he even got sucked in!

Yesterday, we went to Sheboygan, WI, where the local art center has on display many artistically designed chess men. Some were so odd that I could not fathom using them in an actual game. Just outside the exhibit was another exhibit of various games, vintage and otherwise. I searched in vain for go. My spirits fell to an all-time low. Here, I thought, maybe I could find some reference to go, but no. It's as if it doesn't even exist in the Midwest. I felt very alone.

Then we went into the gift shop. There in the kid's book section Laura found a book and showed it to me, excited to think we could buy it for our nephew. It was made of heavy paper stock and full of different game boards. It was spiral bound, and attached to the spiral was a clear plastic pouch that had round white and black playing pieces! "What game are these for?" I exclaimed. I flipped open the book. Backgammon, Nine Men's Morris, 3-D Tic Tac Toe ... and go! A light shone in the darkness. We bought two books, one for our nephew and one for me. Forget artsy chess pieces. Go is art.

June 14, 2004: Last week, I bought HikaruNoGo Volume 1 in English! No more reading scanlations online. Once I discovered that it became licensed in the U.S., I decided not to flirt with the copyright laws. So, having my own copy is wonderful! However, I don't agree with some of the translating:

Well, is there a way to pass opinions onto Shonen Jump, or do we have to be satisfied with what we can get?

Niklaus: I disagree about "Hand of God" being a good translation. While in Japanese, the word "hand" also has the meaning of "move", in English, this is not the case. For more discussion on this, see Kami No Itte.