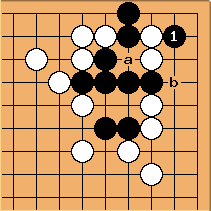 is tesuji. It is the effective use of the belly attachment suji. It deals with two problems simultaneously, namely White's cut at a and White's watari at b.

may be unexpected resistance. 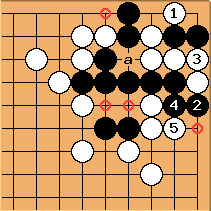 , the circled points show Black's liberties (four). Even if White effectively captures the stones, Black connects at a and White has three liberties : two inside the eye, and one internal, which Black cannot count. (See Richard Hunter's theory on Counting Liberties.) 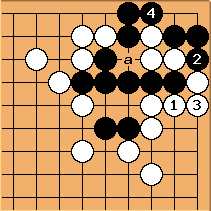 , White is caught in a shortage of liberties, so White cannot play at a.

The following diagrams are just to prove the statement of the reference diagram, i.e. that 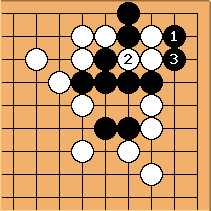 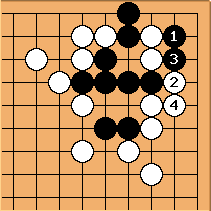 Caution! Black is not alive in sente! He has to answer. If not: 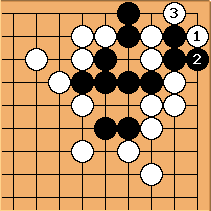 will then reduce him to one eye.

In the above diagrams, notice that Black answered White's attacks twice at the same point. White's strongest resistance is to play at that point herself (cf. the main line).

Now for some failures. 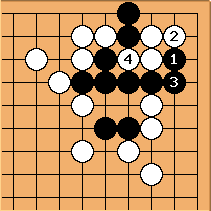 The vulgar (crude) move at

provokes a forcing magari at

, giving White the time to play atari with 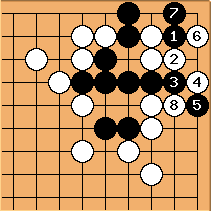 If Black hane at

threatens to make two eyes, and 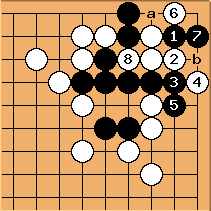 If Black turns at

, White plays atari from the other side (again threatening to make two eyes) and then captures two stones with

. Black can neither play at a nor at b, because of shortage of liberties.

Problem 34
Back to Kanazawa Tesuji Series