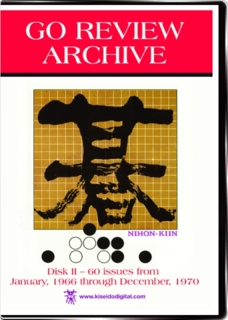 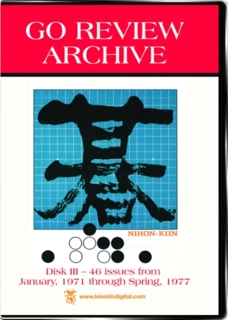 Go Review Archive is a three-DVD set of all 164 issues (15000+ pages) of Go Review magazine in PDF format. It's usable on any device able to view PDFs, and provides full-search capability. It is available for purchase at on-line fulfillment agency Kunaki, at

http://kunaki.com/MSales.asp?PublisherId=123009&PP=1. Kunaki ships everywhere in the world at favorable rates.

The early issues on Disc 1 and 2 provide an invaluable glimpse into the Japanese go world of half a century ago, as the Japanese reached out to spread their beloved game across the world. Disc 3, on the other hand, contains the meatier quarterly issues of higher editorial standard, at the same level as Go World.

Zengarden The first ever English-language Go magazine was Go Review, launched in 1961 at a time when the game was almost unknown in the West. It was a brave decision on the part of the Nihon-Kiin, (the Japanese national Go association) and the monthly magazine made a huge contribution to the spread of the game internationally outside Asia. Kiseido must be heartily congratulated for having brought out a Digital version of the entire 15 years of the magazines history, (164 issues).

Overall, this is a must for any serious Go enthusiast. It has a number of highly interesting series of articles, such as thirty-one articles on Famous Games, Ancient and Modern, articles on strategy, handicap Go and a whole host of other topics. There are also interesting interviews with Western Go pioneers, such as Stuart Dowsey who created the first London Go Centre and Richard Bozulich, without whom the Western Go world would be very much the poorer (and more ignorant of the games wonders!)

The style of Go Review is not as sophisticated as its successor, Go World, and many articles have no author cited. The standard of commentary and instruction is high, but generally not as high as the very sophisticated commentary one finds in Go World, probably reflecting a perception that a Western Go playing public was not ready for really deep analysis.

The contents are also very Japanese-oriented, which is not surprising given the fact that this was a production promoted by the Nihon-Kiin. At the time of its launch in 1961, South Korea was recovering from its terrible war and China was suffering the horrors of the Cultural Revolution where Go (wei-qi) was condemned as a legacy of the Mandarin feudal times. Japan was very much the powerhouse of Go and only that country could have made the necessary effort to spread the game globally.

The product itself is good but not as fine as Kiseidos earlier digital archive of the entire Go World series up to issue number 108 from 1977 to 2006. First, the original material probably inevitably suffers from age. The copies of the magazine came from private collections (Dr. Erwin Gerstorfer and Peter Zandveld of the leading European Go emporium Schaak en Go winkel het Paard in Amsterdam) and there are some handwritten marginalia on some pages of text. Also the typesetting of the original magazine has numerous spelling mistakes, no doubt caused by typesetters unfamiliar with English back in the 1960s, when a knowledge of English was much rarer than it is in modern present-day Japan. In my copy of the 3 disks, at least one issue (December 1965) cannot display as a PDF. These are relatively trivial defects in an otherwise extremely useful resource. However, there is one more important drawback which I feel must be mentioned. In the blurb, Kiseido states that Go Review Archive brings you a digitized, completely searchable version of this invaluable historical and learning resource: however, the searchable index is only presently available for Disc 3, covering January 1971 to Spring 1977 (as Kiseido warn in the blurb): the other two disks searchable indexes will only be available later, at a time to be announced by the publisher. While one appreciates the availability of this new Digital series, it is a pity that the search index was not completed before the Disks were issued commercially.

These slight defects aside, the entire series is well worth buying as it contains a treasure-trove of information about Go. The Go Review Archive deserves a place in any serious players library.