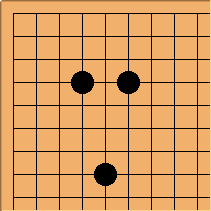 Nessie is a Loch Ness monster.

Some have suggested that this shape is also known as the giraffe's face. See also cat's face, dog's head and horse head. 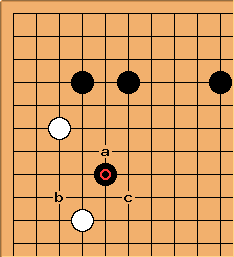 play has become standard in pro games over the past decade, replacing entirely Black at a. White's common local answers are at b or c. Charles Matthews

Are there more than one Loch Ness monster? -- David

Are there less than one? Are they immortal? One supposes that mortal and one implies more. Charles.

Interesting. I had always thought that there was just one, immortal or at least so long-lived that it hadn't yet died. I suppose there could be several, breeding with one another and perpetuating the species, but in that case would they all have the same name? I have always heard Nessie described as the Loch Ness monster, but you have shown me that it is not unreasonable to imagine that there are more than one (of course, assuming that it is reasonable to believe that one exists at all). -- David

Phelan: If your opponent plays a "Nessie", be sure not to give him the