Dieter: I have rewritten this page and did not know what to do with most of the original content. I put it here:

is an extension from the enclosure on the left. Next White extends to

to form a base for the white stones. Black plays

, extending from the corner stone in order to prevent a white double kakari. 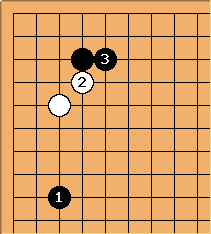 is a three space pincer that aims at the attack of the solitary white stone.

Why so far? This is only one of the possibilities. The purpose is to deny White a two space extension. If it communicates well with stones on the lower side it is the best move.

is an invitation to choose: the side or the corner? Note that an attachment is usually played by the locally-weaker side, not by a stronger one.

chooses the side. It is the extension (stretch) in the diagram. 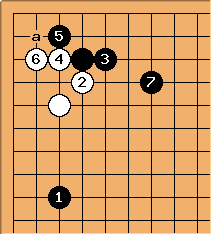 takes what is left - the corner.

is a pleasant move to play. It is forcing, threatening White's base.

White has no choice but to make another extension.

along the side. This play has several purposes. It is a hint at a possible further extension along the top, and also against the surrounding white stones in the corner. It is high (fourth line), so is more useful for fighting.

Everything stops for some time here, because the value of the moves temporarily drops. White can build eyes in the corner or in the center when attacked. Playing a at the moment is not big enough. For Black, exchanging a for a white stone in the center is not favourable. Both sides wait for the development in other areas. At some point of the game a will become urgent.

Bill Spight: The 3-4 and knight's move approach are the defaults: if you don't mention them, they are assumed.

is a three-space pincer.

is a diagonal attachment. So the diagram shows a variation of the sangen-basami kosumi tsuke joseki.

Black 1 is sometimes called an extension but should more properly be called a stretch. It is rock-solid, but not very good at expanding territory. It is usually only played when the stone being aided must be fortified.

This kind of extension is known as nobi or iron pillar.