Eggs In A Basket Problem

KarlKnechtel offers a simple puzzle. Maybe the answer is known, part of theoretical knowledge, and the problem won't be so interesting. But it should be fun for beginners to work out on their own.

How long a line of stones (the "eggs") can be trapped successfully with a net (the "basket", along with the other stones in contact with the "eggs"), in the sort of configuration illustrated? For my purposes, white is deemed to succeed in trapping the eggs if black cannot escape to (play on and connect to) the circled lines without being immediately captured or trapped in a ladder.

unkx80: Question: Are the stones in these two diagrams meant to be at the edge of the board?

Answer: No. At least, I don't think any such thing is necessary. The lack of a border at the bottom of the first and top of the second diagram, at least, is quite intentional. (I moved the question under the second diagram, to keep them from separating. The title of the first diagram is being used as a "broken line" across what is meant to be interpreted as a single diagram - a tesuji for extending SL's functionality ;) )

By the way, here's proof (I think) that a 2x2 square cannot be trapped in the geta: 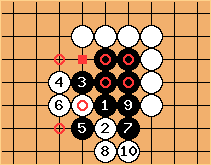 Black is apparently in a ladder, but has an extra liberty at the squared point, so the ladder doesn't work. The eggs hatch - into snakes, apparently. :)

lavalyn asks, are you sure? 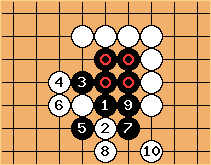 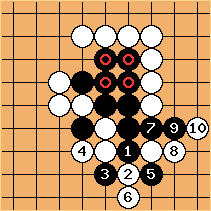 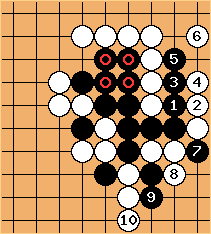 unkx80: Black 1 does not offer the strongest resistance. Black 1 can atari at 7, followed by 2.

But I think I have a simpler diagram below. 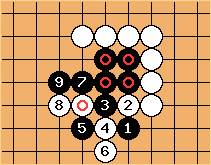 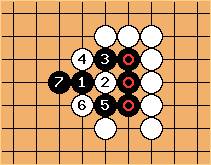 Kupopo: I don't quite get the last wo diagrams, but it seems that what we're lookingfor is the least number of eggs black needs so that white can no longer trap him. In this case, if black has 2x1 then white traps him as such:

White responds to 1 with 2, 3 with 4, and 5 with 6. The only stone white could possibly lose is her marked stone, which begins with four liberties so it is safe. 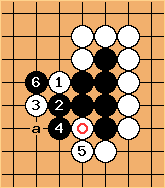 If white starts at 2 instead, then black can hit 1 and force white to play 4 to prevent Double Atari, leaving black wide open. If white doesn't play 3 then it seems black should be able to get out. As long as white doesn't give up the marked stone, black can play 6 and I think gain the upper hand. If, however, she sacrifices the marked stone in favor of a, I forsee the following. 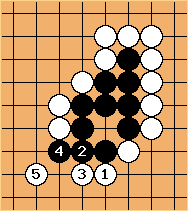 I think that no matter what white does, he can't do any better than a ladder, but because black's eye is connected, it won't work and black ends up surviving. But I'm pretty new so I probably missed something big.

jesusin: White 1 in the last diagram can be played at 2 to kill. And two diagrams before, if white responds at c, Black should take b, not a. Don't you think so? 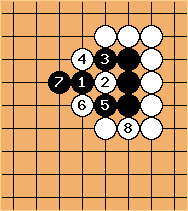 ChrisSchack: I'd say it looks like the situation for the crane's nest tesuji, but with an extra liberty, so why not this?