There is a saying in Go: that there is 'a fate worse than death'.

If you blindly continue to add stones to a dying, hopeless group, you may die in gote. That is, you may play a move that doesn't even threaten to live. Your opponent can play tenuki, and your group still can't live.

This can apply to capturing races, as well as conventional life and death situations. In the former case there is perhaps more risk, since one may need to count two numbers, which may be larger than two (and also, to be kinder, the counting can be complex).

Based on the principle that every beginner's error is probably at some time a professional's tesuji, is there any example of a high level game where a "death in gote" move is played for the purpose of generating a ko threat for later, with the expectation that the opponent would tenuki? Of course all this would require is a position where exactly 3 moves are required to make a group alive.

Herman Hiddema: There are cases where adding a stone to a dead group can create semedori, eg: 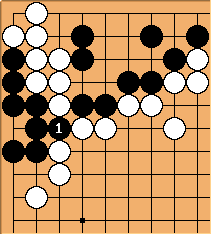 does not require a response yet, because white has more liberties, but eventually white will have to capture the black stones.

Of rather more general importance, making a move that threatens life, but to which the opponent has an adequate response is generally also an error, if it wastes a ko threat for nothing. Extremely amateurish - the problem at a psychological level is a confusion about the use of threats for their own sake, rather than trying with every play to achieve something definite.