The below discussion about the proper naming, has resulted in disambiguating double hane while still emphasizing its first meaning to be two step hane.--Dieter

Bill: After looking in vain for a double hane on the Stanley 3-3 Double Hane page, I came here. I believe that the proper term in English is two-step hane. Double hane is ambiguous. Just to make sure I was not out of touch, I looked it up in the 2001 edition of the Go Player's Almanac. There is no entry for double hane. There is none for two-step hane either, but nidanbane is defined as a two-step hane. Is there an example of double hane in the English go literature?

Anonymous: IIRC, the book All About Thickness (English translation) lists a proverb: "Learn the double hane and you are nearly shodan."

Another Anonymous: IIRC, James Davies uses the term "double hane" in his books, too. Also, googling for "double hane" (with quotes) yields lots of hits.

Bill: Thanks for the refs. :-) If Davies uses double hane in his books, I am surprised it does not appear in the Go Player's Almanac, since he was a major contributor to it. I see that van Zeijst uses the term, and withdraw my objection. :-)

Robert Pauli: Anyway, with what can it be confused, Bill?

Bill: Playing hane from two sides, for instance. Like so: 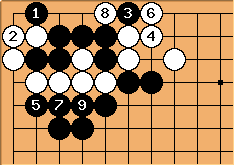 Double hane is proper English for this example. It is not just two hanes that produce the extra liberty, but the combination of two hanes. In other cases with a string of stones on the second line, two hanes do not produce an extra liberty. Conditions have to be such that they work in combination as a double hane. There is no other English term for this play or resulting position, unlike the play and position on the main page.

In Davies' Tesuji, he explicitly covers the above configuration of stones and calls it "two hanes" (pages 82-84). He uses the phrase "two hanes" three times in the main text, and additionally in the section heading "Two Hanes are Worth One Liberty". He does not call this position a "double hane". 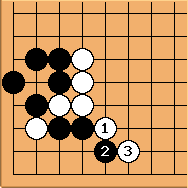 Further, there is a section in the book titled: "The Double Hane Tesuji" (page 146). The first example he gives is:

"As shown in Diagram 7, when Black double-hanes at

RiffRaff: Per the above discussion (i.e. "withdraw my objection"), Bill's comment below was moved from the main page.

RiffRaff: Also, not to bring Charles into the middle of this against his will, but...

dnerra: While I have occasionally heard the word two step hane, everybody uses and understands 'double hane'. It is not ambiguous.

Charles I actually looked up 'ambiguous' in my dictionary. It turns out to be ambiguous. It can mean 'having two meanings', which is rather common in English. Or it can mean the other thing, which is to do with phrases admitting two senses even in context. It would be rare for a go context to make 'double hane' easily misinterpreted, even though one can argue that there are two possible meanings.

Alex: I think a more common misuse of "double hane" is for a counter-hane. In conversation, I've heard

incorrectly described as a double-hane (because both players have made a hane), whereas it's actually a counter-hane.

, on the other hand, actually is a double-hane. 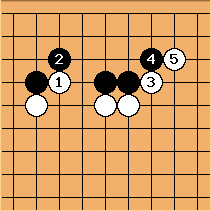