In a game played on November 24, 1705 between Honinbo Dochi (Black) and Yasui Senkaku (White), Dochi seemed to be losing by a few points in the endgame, when he suddenly played a brilliant endgame tesuji. 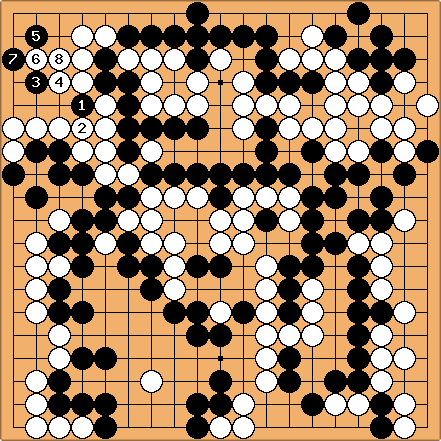 began the brilliant sequence of moves that saved the game for Dochi. 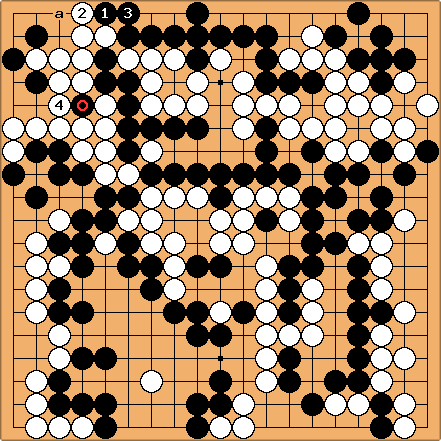 sente, because if White does not capture the marked stone with

, Black would play at a and make a seki.

The invasion does not work if it is played after the hane-connect sequence.

You may wonder whether White has no other way to play: 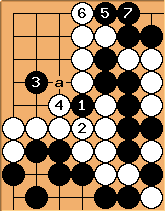 The other reasonable move for White is to play 4 here instead of a. Black next plays 5 and 7. If this is not sente, White has refuted Black's play. 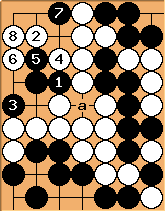 is an eye-stealing tesuji, as it makes the eye at a false, but

is a good response and Black's attack runs into nothing. No matter how hard he tries, e.g. with

and so on, Black cannot get a seki, ko, or anything else. 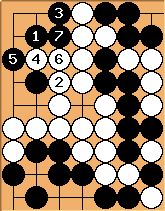 The solution for Black is to play on White's vital point himself, with

is forced, as a move here would be rather awkward for White. Next,

establishes an eye in the corner. Thus the position becomes a seki.

As can be seen, if White did not reply, he would lose his corner territory (in a seki with Black). Therefore, White had to add another move to defend his territory after Black played hane-connect at the top border. The hane became Black's sente and enables him to win the game.

If Black continues playing inside, e.g. with 233 at

here, there is no real difference to the game. At worst, Black has lost a ko threat.

is called into question.

Anonymous2: The author should indeed reconsider