unkx80: This discussion page contained the previous discussions. However note that some of the diagrams have five stones in the black chain, while others have only four stones. Since my copy-editing made most of the discussion obselete, I simply moved all of them here. (2005 August 12)

A Cut Threat Clamp is a clamp which threatens a cut. 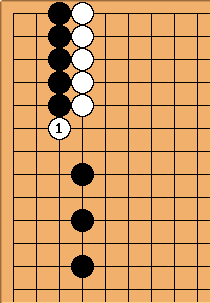 wants to separate black, and damage black's side territory.

What would you do here? 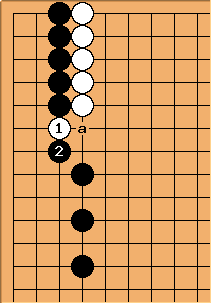 is a clamp, and threatens a cut at a, so we can call it a Cut Threat Clamp. 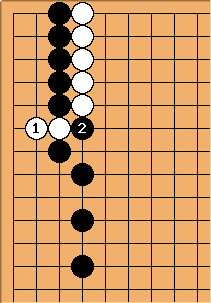 If white descends at

is a cut, made strong by a hanging connection 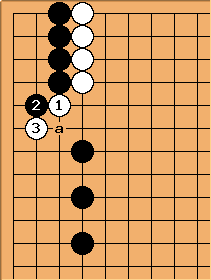 In this case, black falls back at

, and with the double hane of

, white gets what she wanted.

was not possible, a would also be good for white. 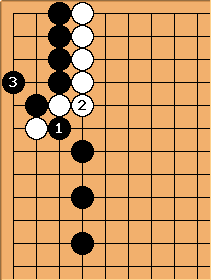 Alex: I agree that the clamp is correct and the hane wrong for Black, but are you sure the double hane is good for White? I don't think White has much here, except aji to work with if she later invades lower down the left side. As White, I would extend at the point of 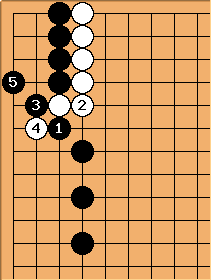 Bill: Since this position can be reached by this sequence starting with the clamp, if

(hane) is an inferior first move, then

Tamsin: Is the Cut Threat Clamp a recognised technique? If it's a neologism, would you mind very much stating so? Thanks.

nachtrabe: Clamp is a "recognized" maek--it is in the books--but I have never heard anyone use the phrase "cut threat clamp" (I have heard "clamp that threatens a cut"). Personally I wouldn't mind seeing the content on this page merged in with clamp.

Fujisawa, in the tesuji dictionary, refers to it as a kosumi-tsuke, noting the necessity of third stone involved in the shape 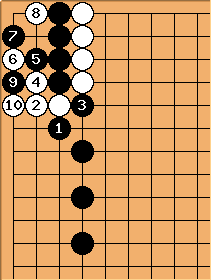 unkx80: When the Black chain has only four stones, the clamp does not work either. White can turn the entire corner into a ko.