Path: <= All you ever wanted to know about sekis =>
Difficulty: Beginner   Keywords: Question, Rules

I was playing against Igowin, when the following situation arose: 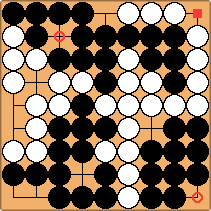 At the end of the game, the two

points were marked as black territory. Are these points really considered black's, despite the seki condition? Is it ruleset-dependent?

Bill: Yes, it depends on the rules. I don't know what rules Igowin uses. Typically, you count eye points in seki under area scoring, but not under territory scoring. Under area scoring White also gets a point for the

Path: <= All you ever wanted to know about sekis =>
Counting Points in Seki last edited by RobertPauli on August 24, 2004 - 12:04
RecentChanges · StartingPoints · About
Edit page ·Search · Related · Page info · Latest diff