Bulky Ten In The Corner

The Bulky ten in the corner is a big empty group without cutting points that still is not territory.

Black can play at any of the 7 marked intersections to live outright with 9 points of territory, but

is best because it leaves either no ko threats or only one tiny one (depending on the rules). ​ White-to-move plays

is at k or s. ​ (Note that White has already taken gote.)

Reminder: ​ Although _the indicated sequence_ is sente, White took gote to get to the start of this diagram.

Either player can make seki, or throw in for a ko that favors Black.

is still empty then after Black retakes the ko, Black's followup is capturing

to live with 9 points under territory scoring. ​ If White retakes the ko, then Black can back down from it with

. ​ (If Black would do that without having played a ko threat, then Black should not play this line.)

after Black backs down

After Black backs down, the ko's swing becomes 9 points under territory scoring. ​ White wins it with

for a seki in which White captured 1 net Black stone. ​ After

, Black wins it by playing either of the other 2 marked points. 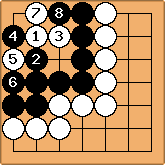