BlueWyvern: Here is a quick rules question... Is a in the following diagram a point or not? Black cannot force White to fill it in, but there is no denying it is a false eye. 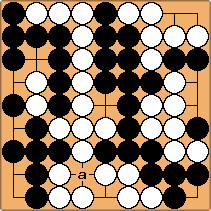 Charles In a seki, no points are counted on the board, assuming Japanese rules.

Anonymous: So what is the score of this game? It seems like black has 3 points in the lower left corner, and that's all the territory? Aren't all the other groups in seki?

Andrew Walkingshaw: Hm. I don't buy that, I must admit. First, let's assume there are no captives, and no komi: 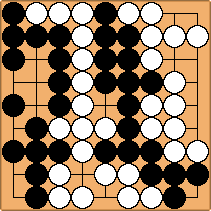 That's 3 captured by White, and two by Black. Given the context, we must be counting Japanese, so assume no previous captives: now the points marked b are Black's territory, and those marked w are White's: points marked s are involved in the seki and thus count for neither side. 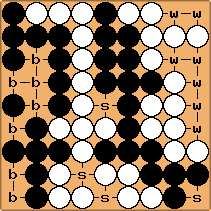 Scartol changed the As and Bs in this diagram to Ws and Bs to avoid confusion..

[1] Bill: With a net area score of 0, the territory score is also 0 if points are counted in seki. Counting the points in seki, the board territory score is -2 (2 points for White). That means that Black has captured 2 more stones than White.

By Japanese scoring, then, Black wins by 1 point, since it does not count points in seki.

Andrew W: Ah, thanks. You might have noticed I edited the page in the very early morning UK time, so I wasn't at my most alert...

Robert Pauli: I disagree, Bill. The Japanese score could as well be jigo -- Black may have played the last stone. (Not that you need it: LostPrisonerTally.)

Hignaki: I think that the score is more likely to be jigo , like Robert Pauli said. In seki, it is a tie. (think about it)