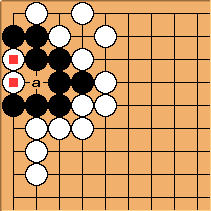 The black stones are dead because there's no way for them to make two eyes or even a seki, but the two

stones are dead too. After all other moves are finished, instead of just passing to end the game, should Black play at a, actually to capture the two marked white stones?

If he does play at a, he gains two points for the prisoners at the cost of one point for the additional dead black stone at a, for a net gain of one point. Or can he take the two white stones as prisoners for a gain of two points without playing at a? Does Black get two prisoners and does White get nine prisoners if no additional stones are played?

All of this only matters under Japanese-style territory scoring where prisoners are counted as points and filling in your own empty points hurts your score. I'm beginning to see why some people prefer Chinese-style area scoring, where prisoners don't count as points and extra moves can be played to explicitly capture without changing the final score.

Niklaus: Capturing the two stones is bad for Black. The stones he captures are compensated for by enlarging white's territorry by two points. But he gives White one more prisoner, so it's -1 point in gote for Black.

Andre Engels: Taking the two white stones as prisoners does not gain points for Black: Black gains two prisoners, but White gains two points of territory. Whether black takes them off the board or not does not matter.

phenomene: Moreover it is incorrect to say the two marked white stones are dead. They are alive. From article 7 of Japanese rules : "Stones are said to be alive if they cannot be captured by the opponent, or if capturing them would enable a new stone to be played that the opponent could not capture." Here Black is dead and White is alive. If we play the whole sequence leading to the removal of the black group, there is a live white stone at one of the two marked points. At the end of the game Black doesn't remove the two white stones.