Please can anybody advise on Black's best course of action when confronted with this irregular but tricky move? 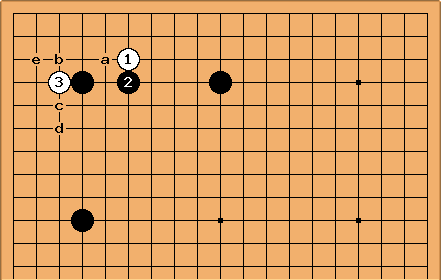 I have investigated several lines and cannot find a clearly good answer.

at a is the common sense play. So, how does White proceed after that to get a good result, in which

isn't just a wasted exchange? White b, we look at Black c or d; I suppose the key line is White c if Black is unhappy with Black b, White e. 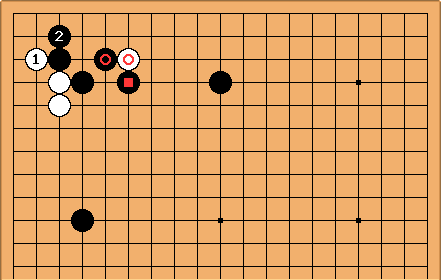 That is, I take the query in this sense: after

exchange make it look like Black has played submissively here?

Bill: In this position, is the comparison between

is not. So I think we should compare

, which is clearly bad for White.

That having been said,

does look too passive.

Ah, it seems that with your suggested move

that Black can transpose into a variation analogous to a good line that I found in Kogo: 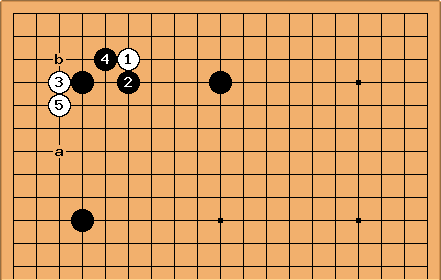 Black chooses between a and b. At a is the correct move while b is falling for White's hamete: 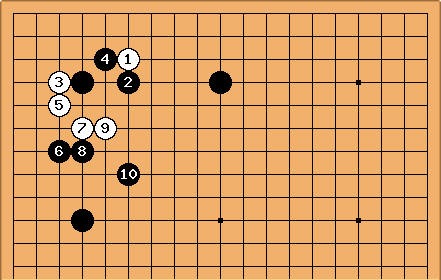 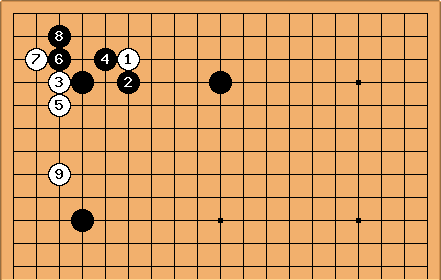 The actual joseki line is this, in which White has exchanged 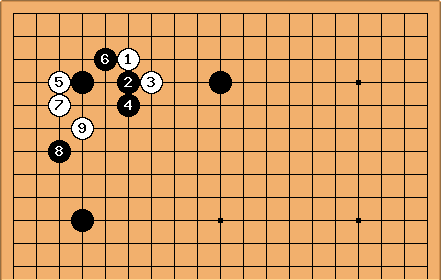 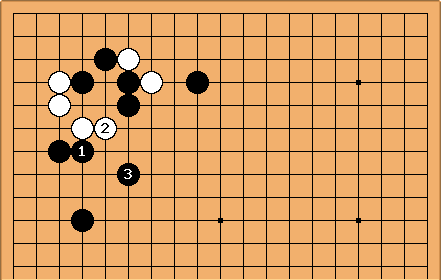 And White is under attack, while Black is solid on the top. 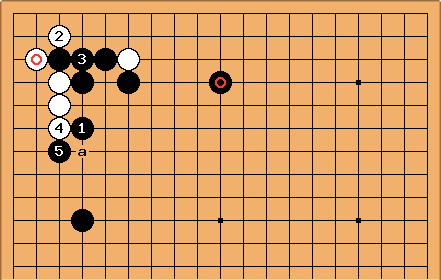 One way that suggests itself is sealing off the centre with

but making the point about White's shape with

. (On second thoughts I might not have the nerve for

. In this case it will become a stone backed up by influence.

Bill: My first thought was the outside hane, but it's difficult. E. g., 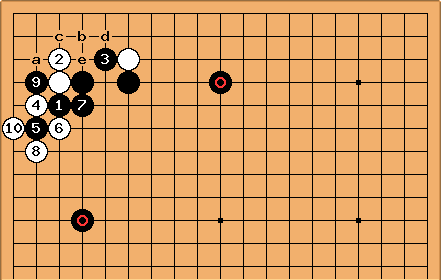 , but that's without the 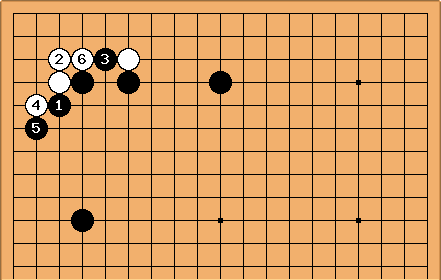 Oops! In the related sequence, Go Seigen, in Watch out for these plays! (Kono Te Goyoushin), shows the refutation to

And what is wrong with the inner hane? E. g., 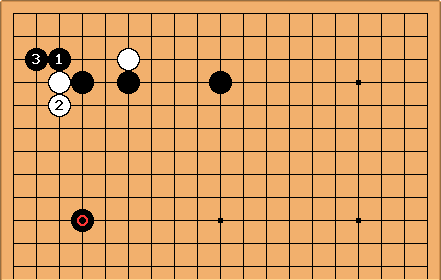 It's not so good on an empty board, because White is too good on the left side. But that is not so when Black has the

stone. Charles I can't answer that question, Bill. But as I assess the character of the player with White, she'd play ... 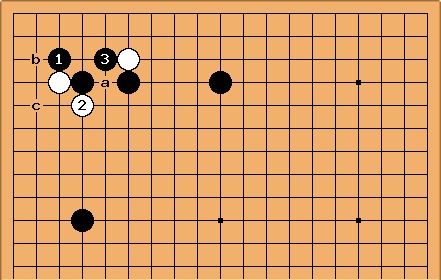 this way. So Black needs to be content with

Bill: I like Black a (bo-tsugi) instead. :-)
Charles Possible ways to play

to make shape are at b and c now. Black a seems to be stronger against White c, Black at 3 as shown against White b? Interesting.[1]
Bill: Well, White has difficulties either way.

Charles I don't think we have answered the initial question yet, quite. I do think the inner hane is good. 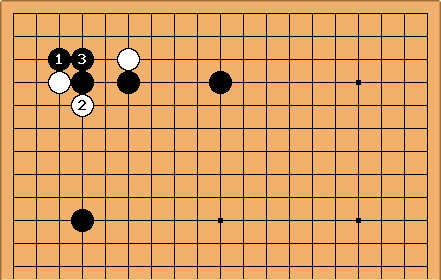 here, what will White play? It appears that in this case of the staircase, giving White nothing at all to work with by connecting might be apt. 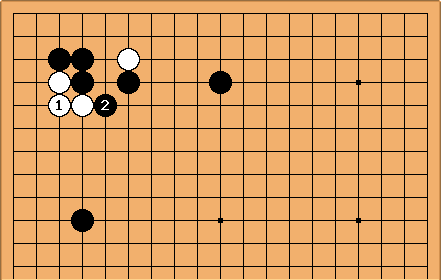 I don't believe White can connect solidly in return. The bulge

must be all Black could hope for round here. 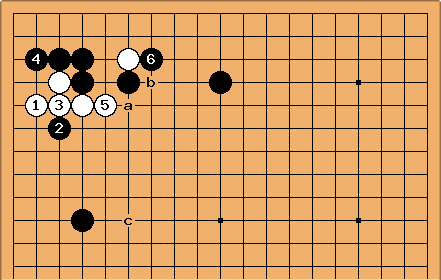 I think we see up to

is also possible in some cases). Isn't Black content with

? White can now exchange White a for Black b; but surely White is too heavy to launch a strong attack? White's play at c would have to be very telling, to call this a good result for White. 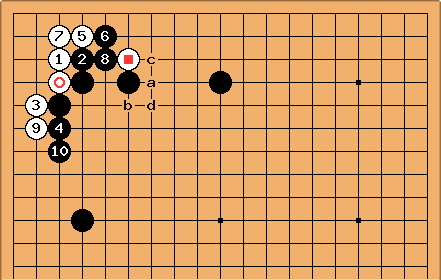 has marginally interfered with a normal 3-3 invasion sequence. White at a will be a nuisance later for Black. On the other hand White could try the 3-3 invasion at

after the attach-extend, anyway. In that case Black blocking at

would give this sequence, only with White knowing that White a has been answered at b (could be at c or d from the diagram position).

Therefore to argue this is poor for Black, you need to say that Black would want to block on the other side, at

. That does look conventional.

[1] Charles Some results to consider. 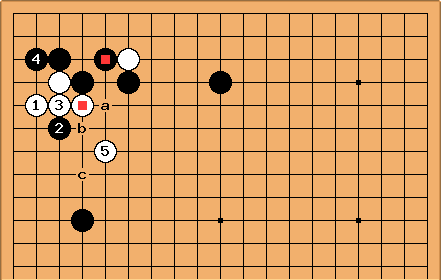 tries to make the best of a bad job. White looks to make a and b miai, staying as light as possible (White is undeniably heavy after

Bill: No thanks to

How about White c instead of 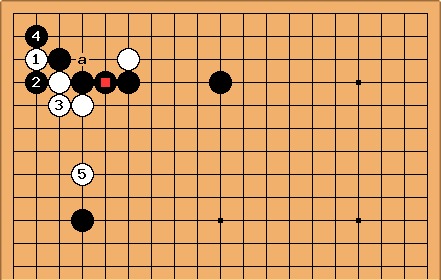 is appropriate, to leave some aji at a. If

, White gets into the corner.

Bill: Oh, I would be thrilled to give White the corner. 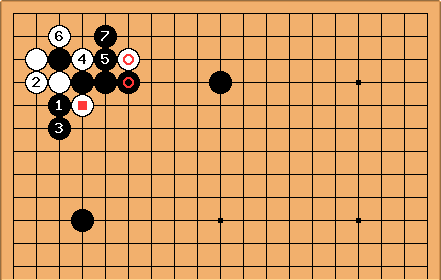 Because of White's local ko threats, I assume that White can play

, and take sente. Even so, comparing this with the 3-3 invasion, which also ends in White's sente, this is better for Black. White's corner is smaller, the exchange of

is not well placed.
As against that, White does have some aji on the left side.

could be considered here. But perhaps this feeling of constraint justifies Bill's botsugi idea. 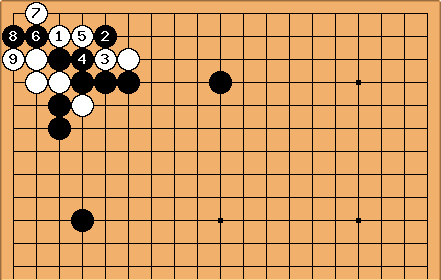 Assuming that Black cannot afford to make the ko,

is his only chance. 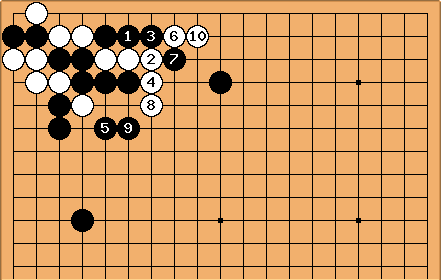 However, Black cannot win this fight. In this variation, Black loses his stones on the top side.

Is the botsugi doomed? Maybe not. 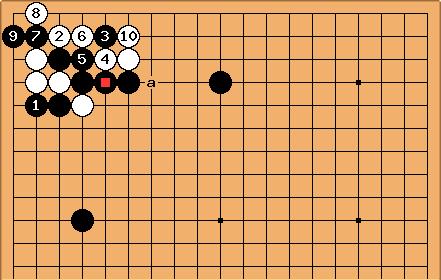 is safe. White has nothing better than to live with

at a looks good enough. 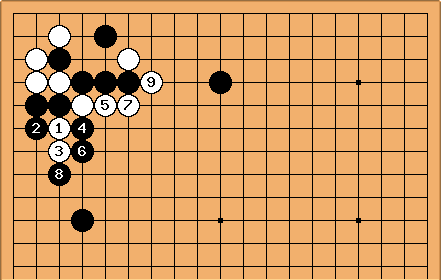 Black 4 - Black 6 works if the ladder does. But even then, 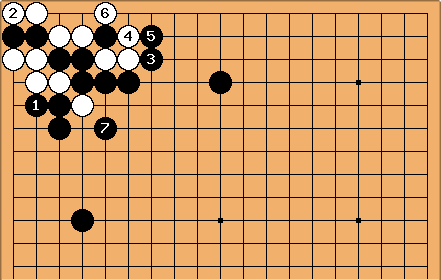 So maybe this is better for Black (See White's success ii). This looks pretty even to me. 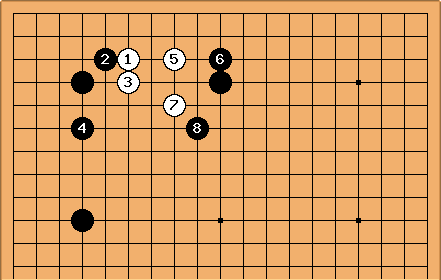