Diamond in the centre 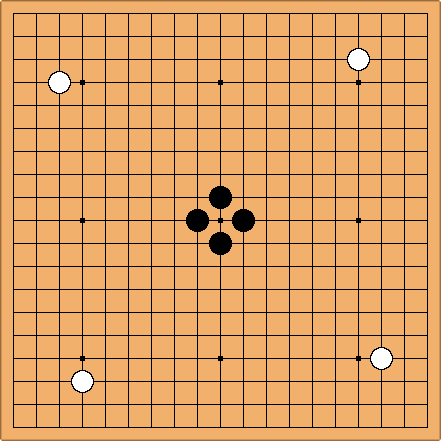 This yields the player playing the diamond in the center tremendous influence around the center. Then the player will try to invade and create a lot of weak groups and run them all to the center.

The strength of this strategy lies in the fact that if the other player tries to take territory in the corner and sides only, he or she will lose. Not only does this guarantee a reduction of the enemy territory, but also center territory.

The correct way to play against it lies in invading the center by attacking it from afar. This way there is little to no center territory.

Alex: The diamond in the center is not a very good opening strategy for Black, because it is overconcentrated (contrast with a ponnuki, which invests only three stones when you take the capture into account) and doesn't really break up White's connectivity the way the Great Wall or BQM69 does. 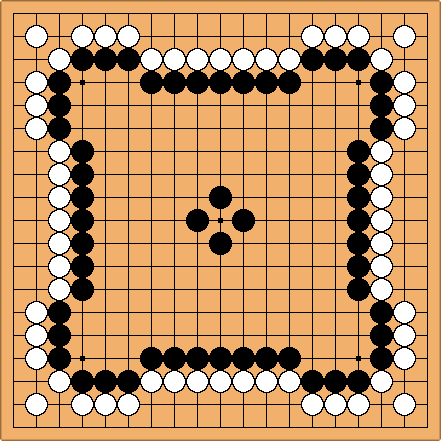 Anyone can see that playing ALL white pieces on the third line doesn't work. You have to invade the center some time :)

iopq: Oh whoops, I miscounted. I need to modify the diagram cleverly to hide this fact :P

fhayashi: you inadvertently did the proof of why third row territory is a losing position...

iopq: There... added some fighting into the position... now Black REALLY wins 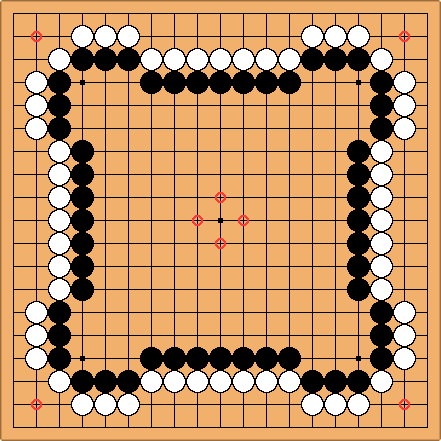 Dieter: I removed the stones at the marked spots. Call it tewari if you want. Bottom line: it is possible to construct a position where White takes all sides and centers and still loses due to Black's centre. A "diamond in the center" is not necessary for the construction of such a position. In the example, any White invasion is bound to die. Incidentally, Black has passed 4 times here I think.