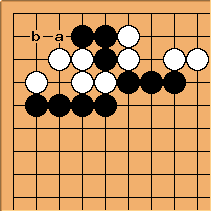 Tapir found this somewhere on SL (this was without comment on the status). But what is the status of the corner? 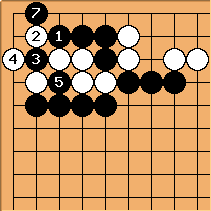 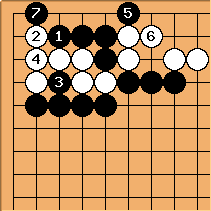 fractic: Isn't this a case of two hanes gain a liberty and black can kill without ko? Black has actually got 4 liberties in the diagram to the left.

tapir: I don't know the semeai heuristics very well, but it surely looks different to me. 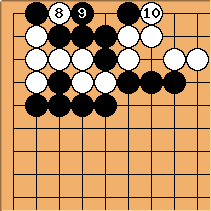 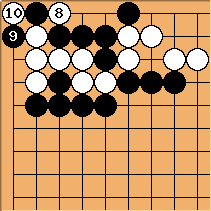 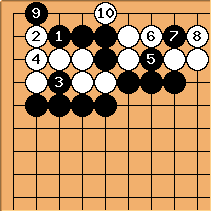 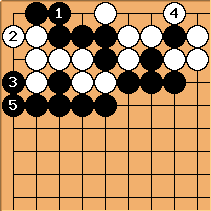 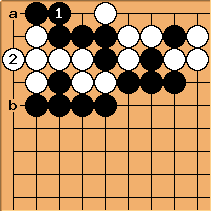 I'm probably missing something, but a and b look miai for W to set up a ko? 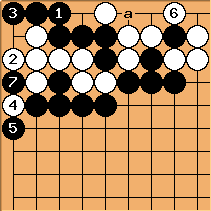 fractic: This does favour Black though. Black takes first and White has an aproach move at a. Of course 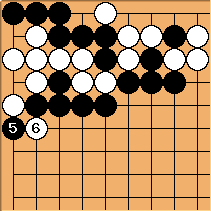 seems risky. Black can extend from

for threats, but this can lose a lot of points if white wins the ko. White can make it 2-step approach ko if he jumps ahead after pushing once, and all of black's threats will have become greatly loss-making. 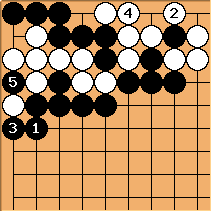 I think might be better for black in a lot of cases. It's still a 2-step approach ko, but black will suffer no damage on the left. 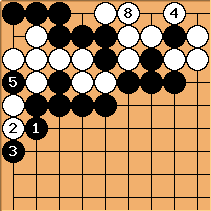 I don't know if there's a way for black to kill unconditionally in the first place, though.

Tapir: The professional practice to play this repeatedly after 4-5 4-3 keima tenuki... indicates that it is not too one-sided. A clear result in the corner would be one-sided to my eyes. However, the SL page just presented the result without indicating the status. I feel giving a joseki without understanding the resulting position isn't good. Maybe Black at b (first diagram) is a way to compromise, if Black can't gain from a ko.