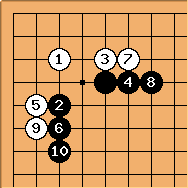 I like to know more about this joseki. Does it have a name? How common is it? When to play it as White? (SL coverage is splitted among pages, an unified page would be nice.)

Bob McGuigan: No name as far as I know. The continuation is: 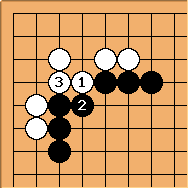 Clearly this is a division of profit for White and thickness for Black so whether White should play this joseki depends on larger scale issues, particularly whether the thickness can work. Note that White ends in gote. Note also that Black can play something other than this sequence.

White should not play the 3-3 invasion in this situation: 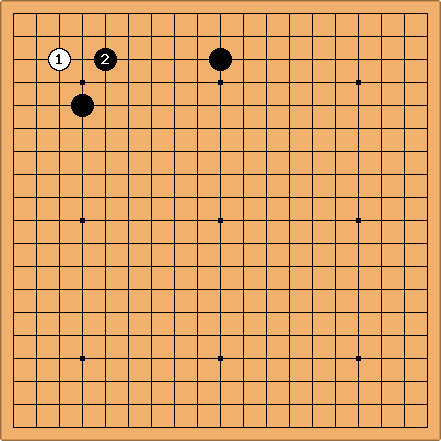 works too well with the stone in the middle of the upper side.

tapir: Thanks. The corner doesn't look particularly big with only 15 points in gote however compared with joseki where White has about the same territory and additionaly influence to at least one side. On the other hand it is much larger than the 3-3 invasion under a 4-4 stone and expandable. Hmm. Maybe I am underestimating it for White.