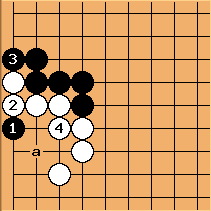 has this endgame technique a name? can we describe it as amplifying - increasing the temperature of the local plays to make

sente "prematurely", while if waiting any longer it may end up as a sente move for white? (i ve seen this in a professional game.)

Herman: I'm fascinated, I've not seen it before

Abydos1: How is it not sente since

threatens to jump in at

has the same sente value as

(both threaten to connect

tapir: The point here is the size of the threat (actually much bigger in the real game than in my diagram, thanks Bill, not the size of the play itself, though it is influenced by whether you can play it in sente or not), which makes this move sente. The score of this diagram and comparison diagram 2 is the same. But you can't be sure whether comparison 1 or 2 will happen. To put it otherwise, of course

(in Comparison 1 diagram) will then probable be sente as well - or even earlier. By making the threat of

larger (much larger in the game) Black succeeds in turning

(from comparison 1). I see this principle at work somewhere in professional games, but the whole concept of increasing the threat of a move to turn it sente is lost to most amateurs at least at my level. Maybe the next diagram shows this even better, if less spectacular, playing

would not be sente since the threat to take one point in sente later is so small, however

would be sente if black waits too long. By throwing in some more stones at

Black can keep sente with

. What I grasp for is the concept of increasing the value of the followup to turn a move into sente. Complete with a nice name to remember it better.

Abydos1: I get the concept of playing a throw in to make the value larger and thus you're able to play it earlier but my point is that since white responds to

then white would respond to

as well since the threat is the same (if

first have the same sente value; yes, the

Edit: After looking at it some more I see where I'm mistaken now. If white ignores

black can continue at a before having to play

to connect; that's not the case if black starts with 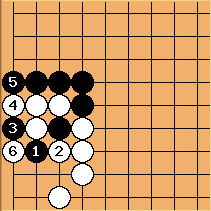 Bill: The atari is not sente. It does not threaten the placement. 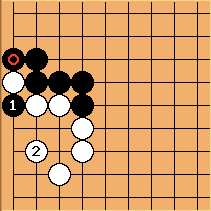 is sente depends on the particular situation, but it is close, anyway.) 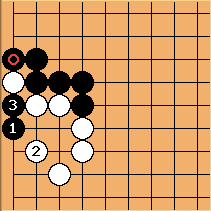 is the response to

. The placement is either gote instead of sente, or a smaller gote than simply taking. 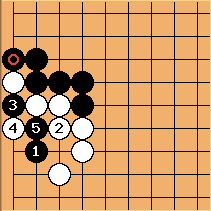 This ko is normally not so good for Black.

Point value comparison:
tapir: Depends on with which diagram you compare. (Identical in points to diagram 2, two points better than diagram 1) The idea seems to be, that

in the second comparison diagram isn't sente now. Yamashiro Hiroshi played it in the 50th Oza, and won the game by 1.5 moku. :) 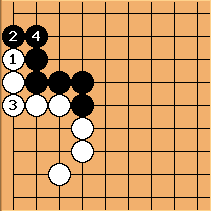 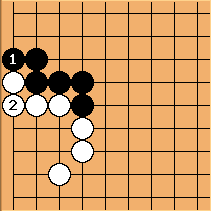 Bill: I think it would be good to show the actual game. 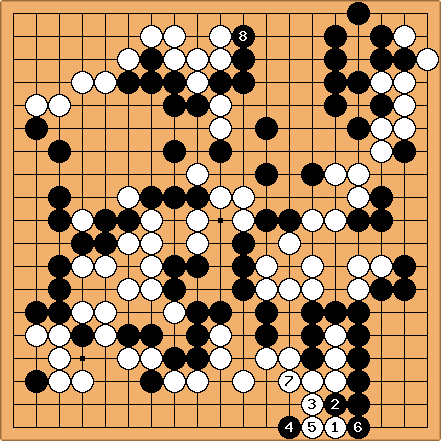 were at 6, White could indeed keep sente and play elsewhere. :)

is a placement. It is played, as we see, as a sacrifice to take sente. Sacrifices to take or keep sente are not uncommon.

BTW, note the size of the threat that Black creates in the actual game. The smaller threat in the example diagram might not be big enough to take sente. :)

Tapir: Yes, indeed. But has this technique a name in any language? I feel like this sort of play is very common in professional play, "heating up" local temperature to sente-ize a certain move or to create ko threats. But placement can be literally anything. Placements to reduce a group to one eye, placements to kill, placements to gain some territory, here it is a placement to turn an otherwise gote move to sente. Isn't this something special, deserving an own term?