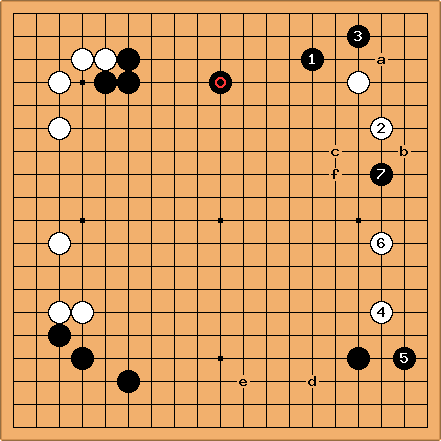 I usually regret taking games against guest accounts on KGS because they always bring out my worst game. In this case, I should have perused the game records of this guest player (black) to see that he was at least 4-5 stones stronger than me.

The joseki in the upper left was played first, then I proceeded to botch the lower left, extending first before sliding. At least I think I learned my lesson from that...

felt inadequate because of

, but I couldn't think of another route. The marked stone makes a pincer tough, no?

Wanting to take sente, I played

, thinking I could come back to a later. But things just went down-hill from here.

1) Am I incorrect in thinking that white is already in bad shape?

2) If I just play a now, is it not so bad (in the game I started an attack on

3) Is there a better response to

3: Is there a better response to

tapir (2k-1k KGS): In my humble opinion, there is nothing wrong with

. (I wonder more about

and about the next moves.) But I like to see what happened later. As you showed b, c as your attacking plays... I fear this is the wrong direction as you don't profit but weaken your

Fwiffo (9k KGS): Hah! I didn't share the rest of the game because it was too embarrassing, but

here is the SGF. Oh well, there goes my pride. It was not my best effort. The

groups join in on the attack (with the eventual plan of invading the lower side). and the

group is actually the one that gets in more trouble. Even though I feel like I've gotten back in the swing of things over the past couple weeks, it's easy to see how rusty I still am from being away from go for so long. I mostly spend the rest of the game making all sorts of non-connections and not making territory.

tapir: Black expected you to answer with

fine then, given that white has lots of space to set up camp somewhere in the bottom side? Is this evolving into too many questions for a BQM?

tapir: It is a BIG question mark, isn't it?

Dieter: In my opinion

is an overplay. White is low on both left and right side after

, so Black should just continue and build on the lower side to have an overall superior position. White can take advantage of

to attack it, by leaning against the top for example, then invade the lower side, for example with d (aggressively) or e (peacefully).

White's low position is due to approaching the lower left at the wrong side, because the upper left is low and solid. You should have approached it from the bottom or not approach it at all and approach the lower right instead. 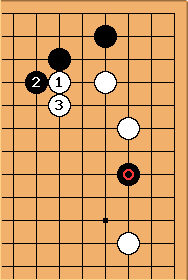 Fwiffo: OK, so at least I had the right idea by going after

. I guess my wrong approach in the lower left just shows how weak my fuseki fundamentals are. I thought that was a good way to work with my stones in the upper left and that it was the "open side", but I guess the other direction isn't "closed" unless there's a black stone somewhere in the middle of the lower side...

tapir: This looks much better than the actual game. By leaning white gets strong and even flattens black framework, while in the game white made

stronger and had trouble with two weak groups.

Fwiffo: This answer is deeply satisfying for me; one of those "ah ha!" moments, like when you see your first snap-back. I've read about proverbs like make a feint to the East while attacking in the West and seen examples of leaning attacks, and dual-purpose moves, but to see how it applies to one of my own games makes all the difference. I can really use this.

Herman: In my opinion,

is a submissive move. After

stone has served its purpose, forcing black to respond on the second line. Instead of

, I would thus respond by immediately approaching from the other side as well, with

at d in the first diagram. 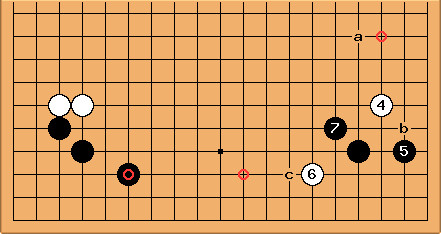 being somewhat submissive, but now playing

goes against the idea of that. White would play a double kakari to a strengthened position. Next

makes miai of the circled points, to attack either stone. Instead I would play

at a to prepare an attack on the corner at

. If Black defends again, the submission of

will be put on the spot. a is better than the game because it maintains balance between high and low, so it is multipurpose for building and preparing attack. --Dieter

is an ancient joseki. A modern alternative is b. :) Since Black has a strong position in the bottom left corner and

is low, and it inhibits the development of 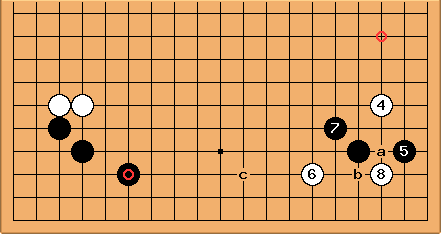 Herman: In response to this

, I would probably play

. That leaves black with a choice of which side to block, a or b. If black blocks at a, white b makes

look like bad shape. If black blocks at b, I would play

at c, and then the circled move

becomes ineffective because of the aji at a

Where to play now?

Bill: Nobody asked, but my choice is the capping play at f. :)

Herman: Agree, with the low strong stones on both sides, that'll force black into a difficult fight :) 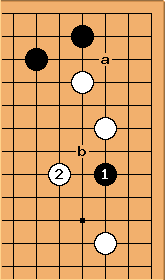 Fwiffo: So you'd prefer that over the leaning attack? I still feel like the top white group is too unsettled from not taking a (of course, I may just feel that way only because that group took it in the teeth in the actual game). I imagine

immediately at b; I'm not able to really visualize the continuation from there, but it makes me uncomfortable. Black would still be weak here, but my instinct would be to choose a line of attack that more directly strengthens the top white group.

Bill: If Black pushes through at b then the leaning attack becomes a possibility. Besides, you normally want to make a leaning attack as sente, so you can return to the main assault. What is the point of building up strength, only to have your opponent head in the opposite direction? (Not that you never do that, but in this case it would be aji keshi, I think.)

As for the real game, yes, not taking a could be a problem, and I think I would have simply played a two space extension on the side rather than making the approach to the bottom right corner. But after

has more to worry about than White's stones in the top right. Also, your attack developed well, at first. Those stones only came to grief later. :)

Fwiffo: OK, that all makes sense. My trouble came about because I don't remember how to make connections. Also, looking at the very first diagram, I can't believe how low my position is everywhere. Nine stones on the third line and just two(!) on the fourth. This is the opposite of my usual style; I've never been a territorial player. And I'm so inconsistent later; I spend the rest of the game sprinkling stones uselessly around the middle of the board like confetti instead of using my low stones to build up territory. 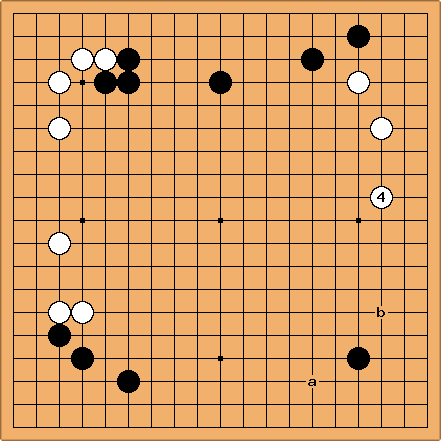 tapir: Bill mentioned it above, and I like it as well :) Later approaching at a looks promising.

Fwiffo: This came up before in the lower left, but what is the principle that should come to mind that makes a better than, say, b? Is it just that the bottom edge has the widest open space on the board? I've started re-reading In the Beginning, and I've ordered Opening Theory Made Easy, so maybe I'll some of these answers there... It's also entirely probable I knew this information in the past and have forgotten it...