rokirovka: In a game on KGS, both players 17k, I faced a more challenging version of the "not very common old joseki" below, from the 4-4 low approach, low extension page: 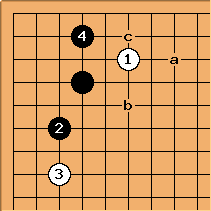 "this is also old joseki, if white decides to go elsewhere then black can pincer a, white will respond with b. connecting at c for black does not work well."

The problem in my game was, White had already occupied a middle point on both the left side and the top side. He played

as a high pincer on the fourth line instead of on the third line as in the above joseki, but his stones on the mid-side points made it look a lot more dangerous:

fractic: This is probably a more important point than the following sequence. The 44 point wants to be developed by a long extension down the side. If you let your opponent get both those points the 44 point loses its purpose. 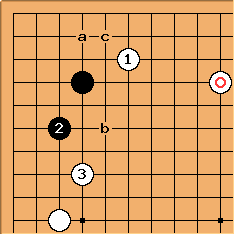 Where should Black play

here? If I follow the old joseki above, I play at a. But here I will get hemmed in in my corner and White will have an awful lot of influence toward the top, left, and center. In the game I played at b.

Andy: b is not good because you don't have a base here yet. Instead you can proceed according to lines given for the 44 63 Enclosure. I'd consider the footsweep at c described here: 44 Point Low Approach Footsweep. This gives white something to worry about while he's thinking about sealing you in. 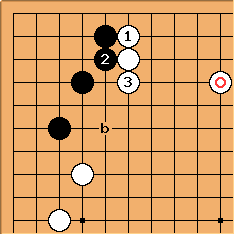 If white continues in this manner, there is a feeling that

is slightly misplaced, and now that you are strong in the corner you can poke your nose out with b, or start attacking white on the left side. 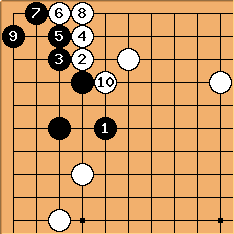 Then I had to concede strong influence on the top side while I held a smaller corner. 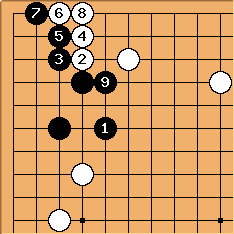 should be directly at 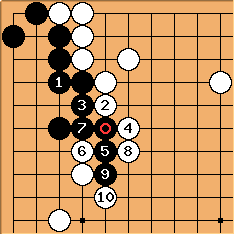 I feel like I played much too conservatively and small in this sequence that followed, but I was determined not to let my corner group get completely hemmed in -- otherwise, what was the point of playing the marked stone in the first place?

fractic: Avoiding getting sealed in is by no means small. It's very important in fact.

is this diagram is the culprit. It should be at

after that Black is safely connected out.

is also bad. It makes an empty triangle and is not needed for connection.

directly would still be connected but it would actually contribute to moving out.

rokirovka: And this funny-looking fight, between the chain from my corner group trying to snake out toward the center, and White trying to cut it off, kept going for many more moves... 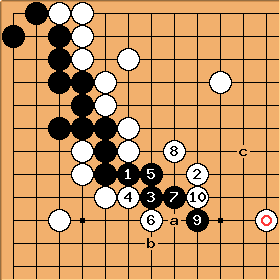 , I played Black at a, White stretched at b, and finally I did something other than snake out with my group: I played at c. I had a few stones with some influence on the mid-right to mid-top-right side (White had 4-4 in that corner, enclosed on the right, open on the top), and the play then moved to that part of the board. (For the record, I had also played a two-stone enclosure of the bottom left corner, White had 4-4 in the bottom right, and I had a stone on the mid-bottom star point.)

I would like to know where I could have played better in this long and funny-looking sequence.

Andy: This sequence is one long train wreck for black; you shouldn't have played any of it. These stones are all on dame points and meanwhile white gets strong on both sides. Moving out isn't the whole story... if white was already strong on the top and left, you can be happy with stealing some territory in the upper left corner and get on with the rest of your game.