Hyperpapeterie: After white enters the corner, plays at a and b are normal, but my opponent instead played at 4. I'd never thought about this move before, and played c. We talked about a, d and e during review, of which I liked a best (it just now occurred to me that b might have potential. 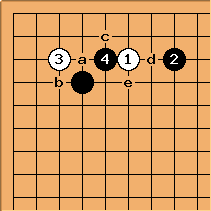 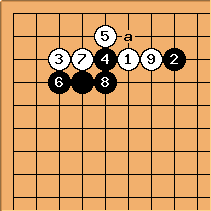 would've been better at a, because... 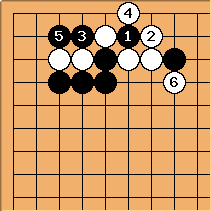 Here's how I thought of a going, though

might be played at a if this fight is not good for W: 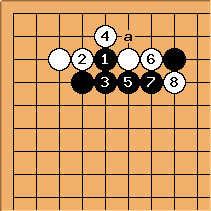 Have other people thought about this move and are my responses any good or (more likely) bad? (Feel free to modify my diagrams if it would help). 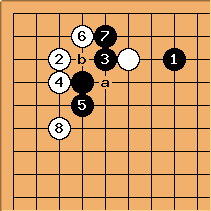 Andy Pierce: You could just proceed according to the original plan. Later, you have a potential forcing move at a, or slightly more corner territory with b, at your discretion. This can't be worse for you than the usual corner corner joseki, and might be better. 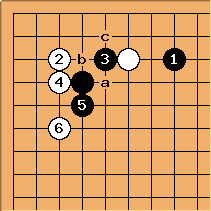 exchange in "business as usual" looks like a loss for white, so you might just skip this and go directly to

looks a little aimless here; black would prefer this stone to be at b, which is where it should have been in the first place. 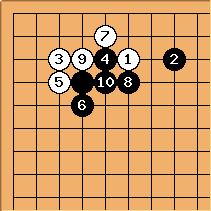 is territorially large, and is a move I won't easily let go.

causes an empty triangle to form. 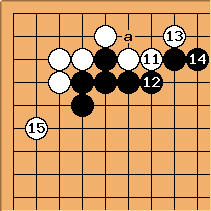 unkx80: I imagine this sequence will happen. Seems pretty good for White.

can consider playing at a too. Might be even better than this sequence. 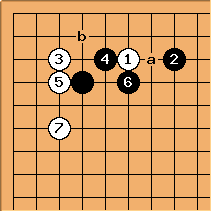 has the option of just playing here and obtain sente. Later, White can aim at a, so Black b would be pretty large. 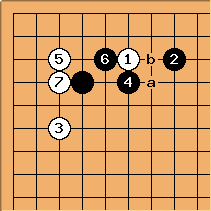 Dave: Note that the above reverts to one variation of the 4-4 Point Low Approach One Space Low Pincer Low Double Approach.

MrTenuki: White also has to find a way to counter

below, which is known to be a bad play when 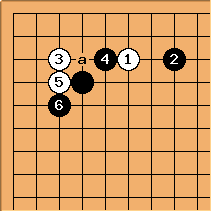 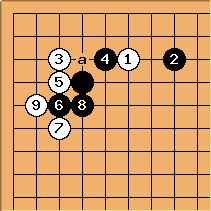 works. the exchange of

is as bad as ever. I don't think this is the best you can do though. Perhaps cutting with

works. I'm not sure.