HowToLose?: I generally practice by playing Go against myself. I was playing one of these games when the following position arose. I'm not much of a counter, so I didn't know the correct sequence. 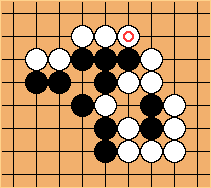 I had just played the marked stone, making atari against the four black stones in late yose.

My question is, should black simply connect, or should he take the White stone? This is what I had: 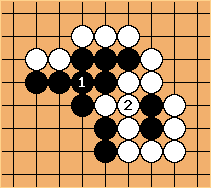 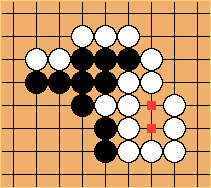 Herman Hiddema: In this position, black gets 0 points, while white gets 4 (two prisoners and the two marked points) 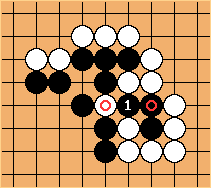 HowToLose?: Now, it seems as though the second diagram is better, but since I'm not any good at miai counting, I was wondering what the effect of the captured black stones in relation to white's territory, etc., would have on the final count. Thanks!

Herman Hiddema: There are some issues here on whether

is the largest move at that moment for white, and the same question on whether

is largest (black could play ko if he chooses). But lets ignore those issues and focus on the end positions given. 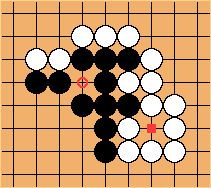 Herman Hiddema: In this diagram, black gets 3 points (one at the circle marked point, two prisoners taken at moves

). White gets 4 points (one at the square marked point, three prisoners taken with

Herman Hiddema: So overall, since both sequences are gote for black, the second one is three points better for black.

Tapir: You have to compare with white taking the black stones, so it is a 13 point gote / reverse sente (6 captured, 7 territory, 1 black defending vs. the one point score with black capturing first), which is not small.

fractic: You don't need to compare with white playing first if all you want to know which black move is better. And since 4 stones are in atari it's clearly not small.

Tapir: The number i wrote is meant to be deiri counting. Btw. the initial diagram description was 0 pt. and 1 pt. gote... that was the reason for my comment. 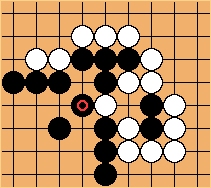 Bill: I have altered the diagram because the effect of a possible atari on the

stone was not clear. Let's just say that the bottom left region is Black's territory. 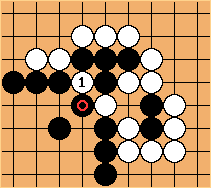 captures 4 stones for a local score of -13. (White scores are negative, by convention.) 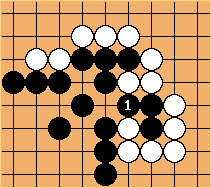 saves the 4 stones and captures 1 White stone. The local count is -1, as we shall see. So the original position was a gote that gains 6 pts., and that is a medium large yose. 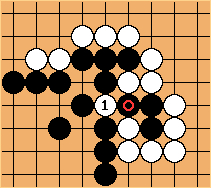 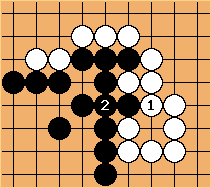 is a 1 pt. sente. At the end each player gets 1 pt. of territory, but White has captured 1 more stone than Black, so the local score is -1.

Bill: It should be obvious that simply connecting Black's four stones is worse than this. :) In fact, it is almost 2 pts. worse.

Bill: As always, we can use a difference game to compare moves. We'll let Black take the White stone and White connect.

saves his three stones, then there is take and retake on the right. The end result is +4 for Black (counting the original captured stone, OC).

finish the play. Each player has captured 5 stones, but Black has 1 more pt. of territory. The result is Black +1.

Black wins the difference game no matter who plays first, so Black's play (taking the White stone) is better. :)