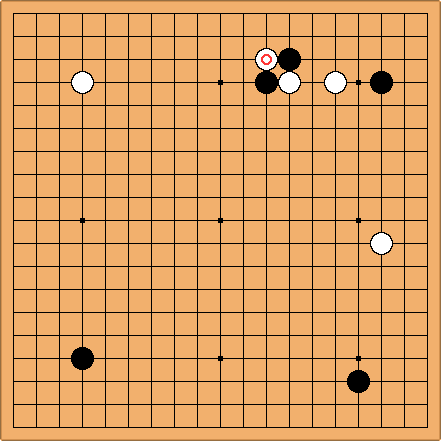 AWA: This position arose in one of my DGS games (the game is still going on -

http://www.dragongoserver.net/game.php?gid=410857). I played the marked move because I thought that any other move would turn out badly (or worse, in any case). I made this page to try to understand why this works if it does, and if it doesn't, how badly it fares against other moves.

Bob McGuigan: Since this is a game in progress, analysis of

could affect game play so I'll just point out the usual joseki for the upper right corner:

are somewhat heavy and may become a target for attack.

AWA: This part of the game has been played out, so it is safe to discuss now. 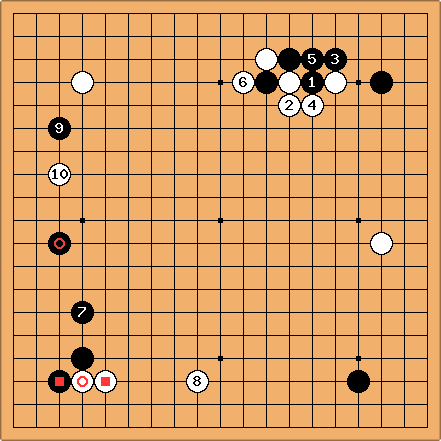 xela: This seems to be the current position, so it's best not to analyse this diagram just yet. Going back to the beginning, though:

xela: The proverb says "crosscut-extend". I'm not sure what white would do next here.

JG: My first thought was to play directly at c. But it is clearer for White to begin with a. Then, if Black b, White c leaves White connected and Black split. Black should probably play c in response to a, but he still ends up split.

kokiri yeah, the crosscut-extend page alters the proverb to: When there are no other stones nearby, extending from the crosscut gives the advantage and I think that 1 is pretty unpleasant for black after white a.

gives Black a forcing move at

White can choose between a, preventing a Black sente (but crawling on the second line), b attacking the lone corner stone, or even c, attacking the shape of Black's alleged thickness, which may be an overplay. In any case this result is not good for Black.

Dieter: In a crosscut situation, basic instinct is indeed to extend, but then the weaker stone. This is the first move to evaluate. I think in this case it is also the best move.

In this variation, Black's hurting the marked white stone is much better than White's capturing the marked black stone. Black will end up with a big corner, White with a somewhat overconcentrated shape on the outside.

Here, White sacrifices two stones, but his outward influence lacks a potential base and the attack on the corner stone is bound to backfire.

A more difficult variation is this one. If

it looks like Black will come out best but I still have to calculate it. Someone?

kokiri - i was going to ask you about this, with

at a. When i have a little more time, i'll put up what i thought, but i certainly didn't come to any real answer. (I also wonder about