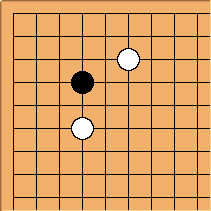 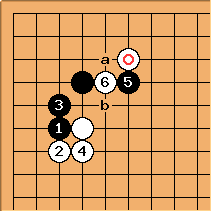 Tapir: In a game i played recently black continued after the double approach by playing joseki as if nothing have happened.

looks doubtful to my eyes, but I'm trying to play solid... I decided to use the marked white stone with

to either take the corner or to develope on both sides. This worked out in the game, but i'm not sure about

here. Is it playable? Are there better plays?

Herman Hiddema: First off, 1-5 are not really joseki even without the marked white stone

is a good move in this position. Read the explanation by kb below for a good explanation. 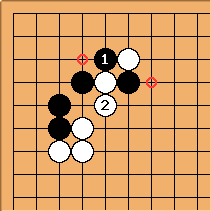 After Black plays at a he can't defend both marked spots against white.

kb: Let's turn to something more ideal for Black. 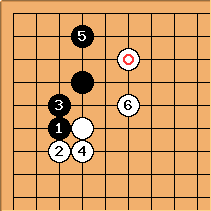 (which are fine), then plays

is needed in order to make the

stone look good. Now Black is enclosed in, but has a big corner (14 points), and gets first move elsewhere, which is pretty good considering White started with two stones here to Black's one (someone else please comment, I haven't seen the high-low much.) There is also a small weakness in the shape between

? I felt obliged to play them, but after

defending the corner instead of playing pseudo-joseki... i dunno, i would not mind as white, enclosing the corner is surely good. Even better at my level of play.

Now let's go back to your other diagram. 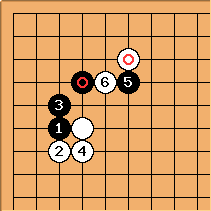 is a sharp play, taking advantage of the weaknesses in Black's shape between

. Black, though, can just settle with the a-b exchange, then connect, forcing White to capture in a ladder. (If White does not have the ladder, you should not play

in the first place.) 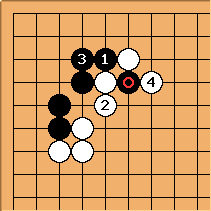 The difference is that White is now very thick, whereas Black only still has about 14-16 points in the corner. This is most likely better for White (Black still has some ko threats and a bit more aji than the first example, but White's thickness will generally outweigh that). 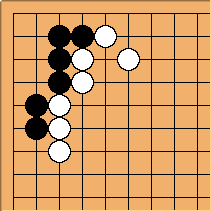 Dave: Hmmm... Let's compare the diagram above to this common result when Black invades directly at the 3-3 point under a White stone. Here White has played one more stone, while above White has also played one more stone. Here White has massive thickness, while above White has massive thickness. Here Black has about 10 points in the corner, while above Black has about 16 points in the corner. The difference is about equal to the komi. So should Black actually be dissatisfied with the result above if he has originally chosen to take the inside by attaching underneath? 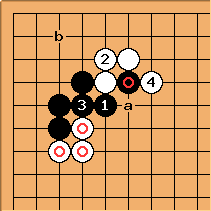 Black at b in your example is very bad - he ends up with a clumsy group and no territory, while White is developing on both sides (a and b are more or less miai). The only way Black should ever play this way is if attacking or capturing the

stones on the left is large, but by itself it is not worth as much as taking the corner. Black still owes a move in this location and ends in gote, whereas before he would end in sente - very important in the opening. 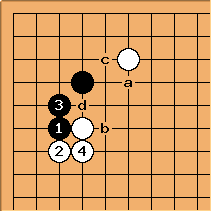 when there are no surrounding stones. In other words this is not joseki against a "pure" double approach. Black most often attaches at a with b, c, d as alternatives.

when there are stones around that will make

less than ideal. For example, if there are White stones down the left side that will make White over concentrated, or if there are Black stones that will blunt the development of 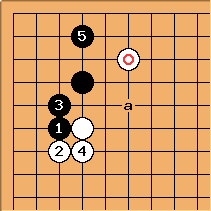 In cases were White goes ahead and plays

anyway, she virtually never continues with a play around a. Instead W treats the marked stone as a forcing play and next plays away. The only exception that I could find was when the top-side Black position was strong enough to threaten to capture the marked stone with a single additional play. 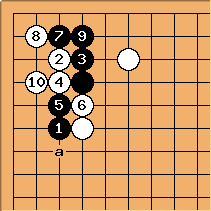 As noted, Black attaches at

when White can not fully utilize her outside influence. Therefore White may not follow Black's plan. The most frequently played alternative to the hane at a, is the Immediate invasion at

. This can lead to a whole variety of variations, including some very hard fighting after